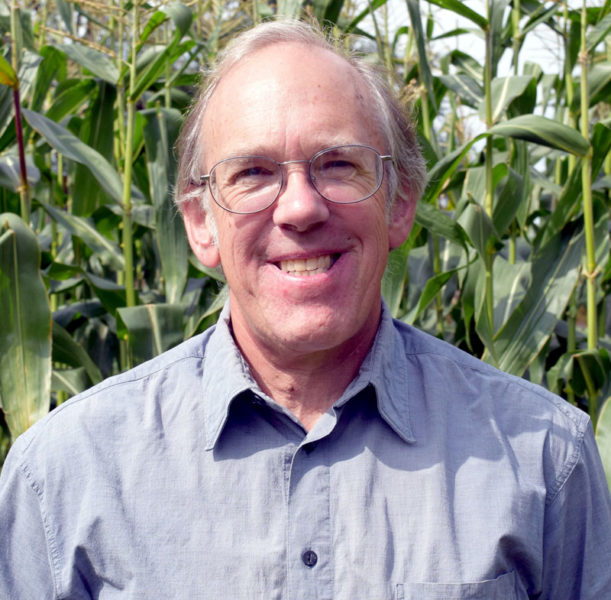 Alna artist Jon Luoma combines his unique style with his passion for the outdoors – particularly the woods and waters of Lincoln County and Maine’s North Woods – to create one-of-a-kind landscapes and wildlife scenes.

A solo show of Luoma’s recent work will open at Savory Maine in Damariscotta on Wednesday, Sept. 7 and run through Oct. 17. A reception for “Landscapes of Maine, Newfoundland, and Nepal” will take place from 3-5 p.m., Friday, Sept. 16.

Luoma works mostly in watercolor and Chinese ink. He had long been interested in Chinese painting, and about 10 years ago, he spent a few months studying traditional Chinese ink painting with an artist in China.

“It was a great experience and I think some of that flavor comes through in my more or less Western watercolors,” Luoma said.

He describes his work as “paintings of, usually, real scenes and real places, but they may be partially abstracted or they may be changed around to suit the needs of the picture and to bring out what I want to bring out.”

He paints outdoors and from photographs or sketches, as well as from memory, drawing on his background in Chinese art.

Chinese artists stress painting from memory “because they think that’s an important part of the process, that you sort of internalize what you’re looking at, and the painting brings out what’s important to you, not just what you’re seeing in front of your face,” he said.

Luoma primarily paints scenes of nature. “I think the natural world is truly inspiring,” he said.

He travels to Maine’s North Woods several times a year. He appreciates the wildness of the region; the beauty of its forests, lakes, and rivers; and the variety of native wildlife.

An enthusiastic canoeist, he has paddled the Saint John and Allagash rivers several times each.

He names Baxter State Park as his favorite place in the state. The Savory Maine show includes some paintings of the park.

The park also features in some of his most notable work of the past: his illustrations for a special edition of “The Maine Woods” by Henry David Thoreau are in the collection of the Portland Museum of Art, and the 2013 book “Art of Katahdin” by David Little features two of his paintings.

“It’s a good hiking park where, to see the best of it, you have to walk away from the roads, and I think that’s a good thing,” he said. “There’s a huge range of different types of terrain, from mountains to lowlands to rivers to lakes, and it’s big – 200,000 acres plus.”

Every winter, he goes to Baxter with friends for five or six days of camping and cross-country skiing.

“Hawk Over the Sheepscot River” by Jon Luoma.

“Baxter Park in the wintertime is absolutely beautiful,” Luoma said. Other visitors are few and far between. “I sort of like the severity and loneliness of it,” he said.

A couple of years ago, he canoed the East Branch of the Penobscot River, which runs through the new Katahdin Woods and Waters National Monument. He has also cross-country skied and hiked the Appalachian Trail through the parcel.

While opponents of the national monument have dismissed the 87,000 acres as “swampy woodlands” home to black flies and little else, Luoma begs to differ.

“That’s just not true,” he said. “There’s some beautiful country there.”

When Maine Gov. Percival Baxter donated Baxter State Park, those forests had been cut too.

“It’s one of the real pleasures of going to Baxter State Park now, not just to see the forest regrowing, but to know that it will continue to regrow, and the same thing is going to be true for this national monument,” Luoma said.

Luoma has a passion for conservation evident in past work with the Allagash Wilderness Waterway up north, as well as the Damariscotta River Association, Hidden Valley Nature Center, and Sheepscot Valley Conservation Association back home.

Luoma, 63, grew up in Ohio. “I grew up in the late ’50s and the ’60s in a suburb of Cleveland and saw it transformed from a calmer urban landscape to a landscape filled with malls and traffic, and, I think, like a lot of immigrants to Maine, I wanted to get away from that,” he said.

He graduated from Marlboro College in Vermont with a bachelor’s degree in studio art and moved to Maine. He has lived in the state for 41 years and in Alna for almost 30. He plays the viola, and met his partner, Cathy Johnson, playing chamber music in Alna in the late 1980s. 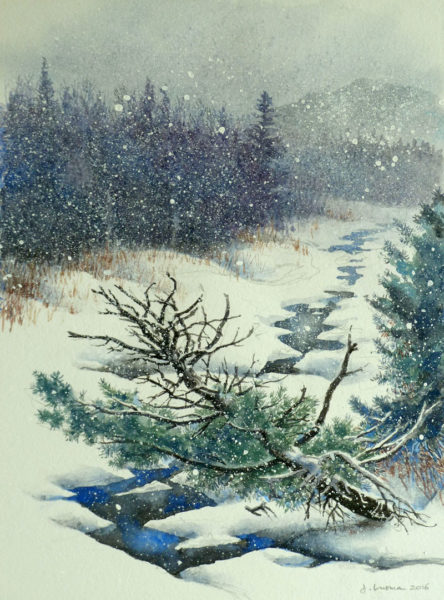 “It’s an incredibly beautiful town and I like the rural quietness of it,” Luoma said.

Luoma worked for DeLorme, the mapmaker, years ago and was once the illustrator for the Maine Times, an alternative weekly newspaper published from 1968-2004. He still does some commercial illustration, but mostly focuses on his own art now.

When he’s not painting or exploring the Maine woods, he likes to travel with his partner. In addition to China, Nepal, and Newfoundland, their destinations have included the Arctic and Myanmar.

On a summer trip to the Arctic, they canoed for a month and didn’t see anyone else. In Nepal, they walked for almost a month through the Himalayas, ascending to 17,800 feet.

But it’s the landscape of Maine that he returns to time and time again in his travels and in his art.

Some 40 years ago, before he moved to Alna, he visited the area with friends to paddle the Sheepscot River.

“I remember thinking how beautiful it was and wondering if I would ever have a chance to get out of the city and live somewhere so attractive, and I’m really pleased that I made that dream come true,” he said.