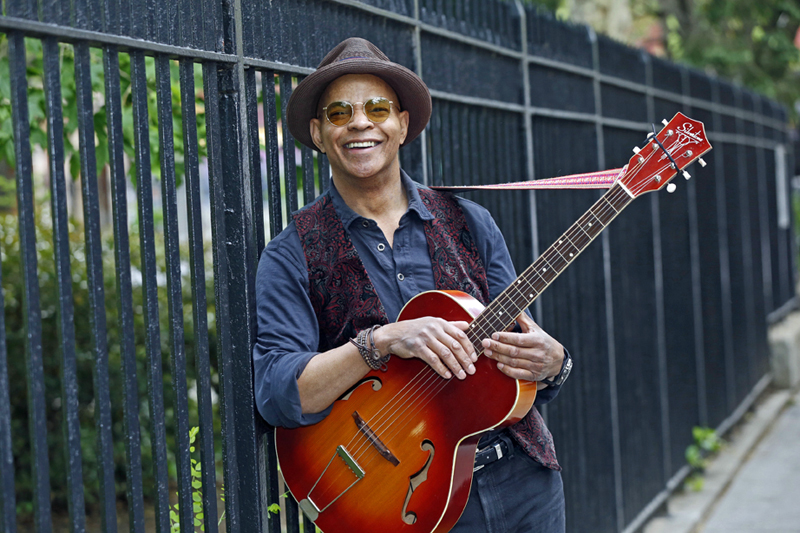 Guy Davis once said, “I like antiques and old things, old places that still have the dust of those who’ve gone before us lying upon them.” Blowing that dust off just enough to see its beauty is something Davis has excelled at for more than 20 years of songwriting and performing. It’s no wonder his reverence for the music of the blues masters who have gone before him has been evident in every album he’s ever recorded or concert he’s given. On Wednesday, July 19, Davis comes to Maine to perform at the historic Opera House at Boothbay Harbor.

Davis has had his musical storytelling influenced by artists like Blind Willie McTell and Big Bill Broonzy, and his musicality by artists as diverse as Lightnin’ Hopkins and Babatunde Olatunji. However, there’s one man that he most credits for his harmonica techniques — by stealing and crediting from him everything that he could — and that man is the legendary Sonny Terry.

Davis’ newest album, “Sonny & Brownie’s Last Train – A Look Back at Brownie McGhee and Sonny Terry,” is an homage to these two hugely influential artists, influential not only on Davis’ career, but on thousands of musicians around the world. Recorded in the summer of 2016 in Milan, Italy, the album features the original title-track song written by Davis, songs by both Terry and McGhee, as well as songs known to have been recorded and performed by the famed duo written by their contemporaries, such as Libba Cotton and Leadbelly.

Davis has spent his musical life carrying his message of the blues around the world, from the equator to the Arctic Circle, earning him the title “An Ambassador of the Blues.” His work as an actor, author, and music teacher earmark him as a renaissance man of the blues. What music and acting have in common, Davis explains, “is that I don’t like people to see the hard work and the sweat that goes into what I do. I want them to hear me and be uplifted. And I want some little 8-­year-­old kid in the front row to have big eyes and say, ‘Hey, I want to do that!’”

Tickets for Davis’ July 19 show are currently available through the opera house box office at 86 Townsend Ave., Boothbay Harbor, or by calling 633-5159. Tickets and information are also available online at boothbayoperahouse.com. Special advance-purchase tickets are $20.Tickets purchased on the day of the concert will be $25. There is a handling fee of $2 per ticket. Doors for seating open at 7 p.m.; music starts at 7:30 p.m.