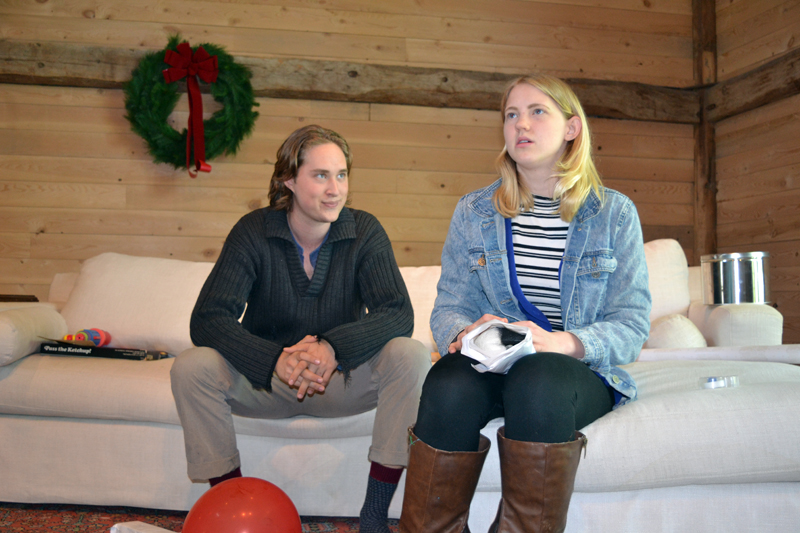 For the second year in a row, Aris Farm, a 44-acre working horse farm in Walpole, will be the setting for an evening of original plays presented by four members of a theater group from Winston-Salem, N.C.

On Thursday, June 8, Gracey Falk, Chris Holtkamp, Maddie Milligan, and Dyer Rhoads – 20-year-old students in the acting program at the University of North Carolina School of the Arts – will present “A Night of New Plays,” all written, acted, and directed by the foursome. The 7:30 p.m. show, which is free thanks to grant funding through the university, will take place in the beautifully renovated 19th-century barn just off Route 129, near the entrance to the farm.

“We all met as students at University of North Carolina School of the Arts,” said Rhoads, who lives at Aris Farm when he is not away at school. Milligan is from Irvine, Calif.; Falk is from Winston-Salem; and Holtkamp is from Saskatchewan, Canada. Falk and Milligan room together in Winston-Salem.

“We wanted to read plays; we wanted to put together a group to read out loud,” Rhoads said of the impetus behind the formation of their 2-year-old theater company. “We got together every Saturday morning, bright and early, to read plays.” Though there were others involved in the readings – thanks to a good response to their Facebook post – Rhoads, Milligan, Holtkamp, and Falk were “a consistent foursome … that got along and shared a passion for the theater.”

On a recent Thursday, the four thespians ran through a scene from Falk’s play “Adam and Carol,” directed by Falk and Holtkamp. In this particular scene, Rhoads and Milligan, who play a husband and wife of a young daughter, become locked in an escalating fight on Christmas Eve about the husband’s failure to purchase a Barbie Dream Castle for their daughter for Christmas. The dialogue and the acting were realistic and compelling, giving one the impression that Falk has witnessed such a scene in real life, or at the very least has a good imagination as to how such things can go. 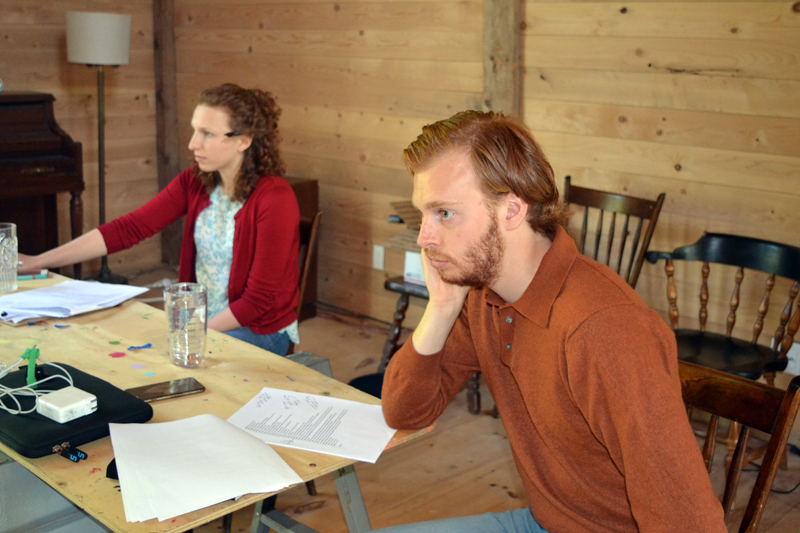 Other pieces to be presented on June 8 include one “about the death of a bird in an aquarium,” Rhoads said. Another is centered upon elderly ladies at a garden club in North Carolina, and yet another is about kids trying to get to the moon. In one play, the actors play 8-year-olds; in another, they play 40-year-olds.

“There are fun, funny pieces; there are wacky pieces; there are sad pieces,” said Falk. All of the short plays to be presented explore the theme of what it means to be an adult, to grow up, but they “are relatable to people of all ages,” she said.

“The world of acting is really different nowadays,” said Rhoads, explaining the importance of Aris Company to all four actors. “Instead of having guaranteed work with a repertory company, actors have to audition for individual shows.” Aris Company productions offer them ready access to ongoing acting experience. 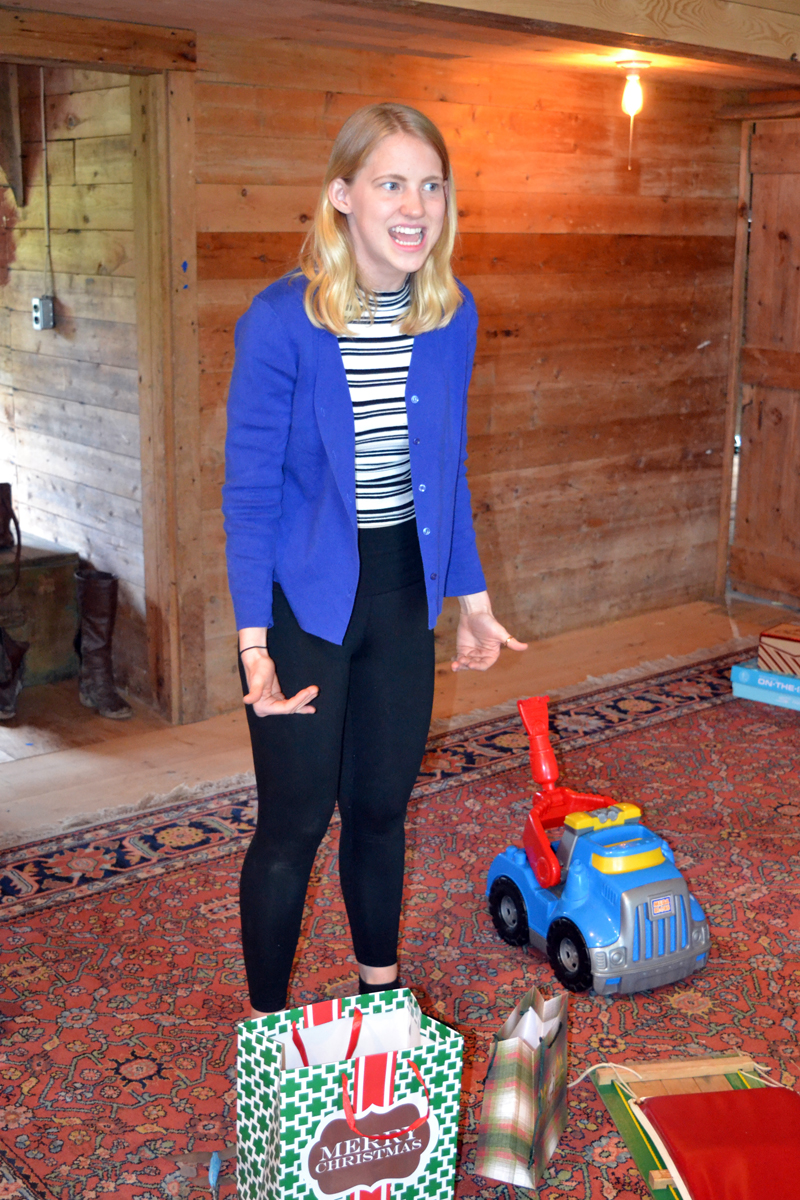 Aris Company actor Maddie Milligan rehearses a scene from “Adam and Carol” at the theater space in the Aris Farm barn in Walpole on Thursday, June 1. (Christine LaPado-Breglia photo)

The theater company also gives the actors valuable experience in writing, directing, set design and creation, props, costumes, and so on. “We are excited about those things. They are necessary in today’s acting world,” Rhoads said. “We are working to be productive, generative artists rather than simply actors dependent upon walking into a room and auditioning.”

“The point of this project is that we are learning to do this by doing it. It’s a time for us to experiment. We are learning theater not from what someone told us about it, but from actual experience,” said Rhoads.

“We are pushing our space in terms of how much we can do,” said Falk. “We’re going to have a bunch of surprises for this show in terms of lighting and sound.”

“We have had to push ourselves to find a creative solution for what a writer writes, like if a writer writes about a ladder that goes to the moon,” Rhoads said.

Falk emphasized the company’s desire to reach the audience in a meaningful way. “The main point of doing this is to share with people,” she said.

Part of reaching the audience, said Rhoads, is getting feedback after the show. “We want to hear from the audience; we want feedback afterward,” he said. “The opportunity to get feedback is one we get with this community, and we’d love for them to come!”

Falk is clearly excited about Aris Company’s upcoming night of theater. “We just really love to put on plays, ever since we were kids,” she said. “We love to play!”

“We love to do what we were doing when we were 3-year-olds,” said Rhoads.

“I want to bring people together in a space and tell stories. I want to make theater that feeds the soul,” said Rhoads, becoming serious. “The questions we have as 20-year-olds are valuable human things. Theater is vital, fresh, and we have a voice to contribute.”