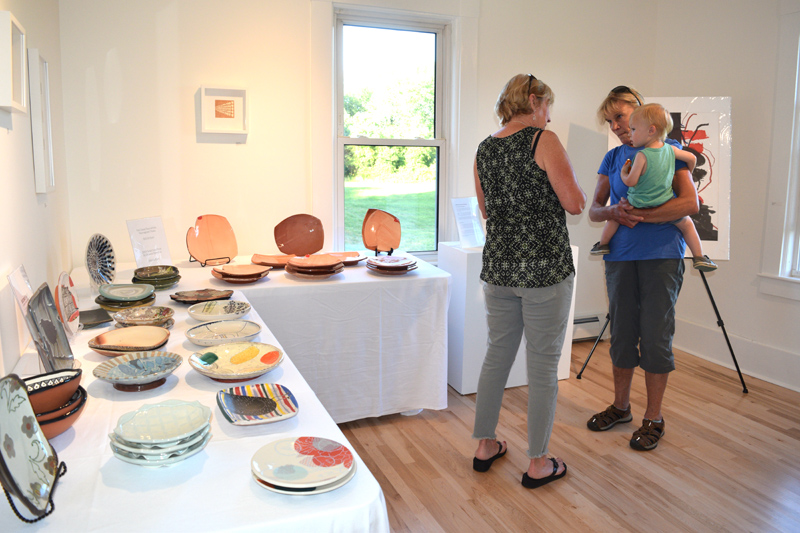 The retail shop in the new Joan Pearson Watkins House in Edgecomb, now part of the Watershed Center for the Ceramic Arts campus. (Jessica Clifford photo)

After a soft opening in July, Watershed Center for the Ceramic Arts held an open house on Tuesday, Aug. 20 for its campus’s newest building in Edgecomb, which completes the first phase of the nonprofit organization’s campaign to open its facilities year-round.

Watershed Center for the Ceramic Arts is a nonprofit arts organization based in both Newcastle and Edgecomb that offers summer and fall residencies, workshops, artist talks, and public events.

Besides making this one building usable year-round, the goal is to make the rest of the campus the same. 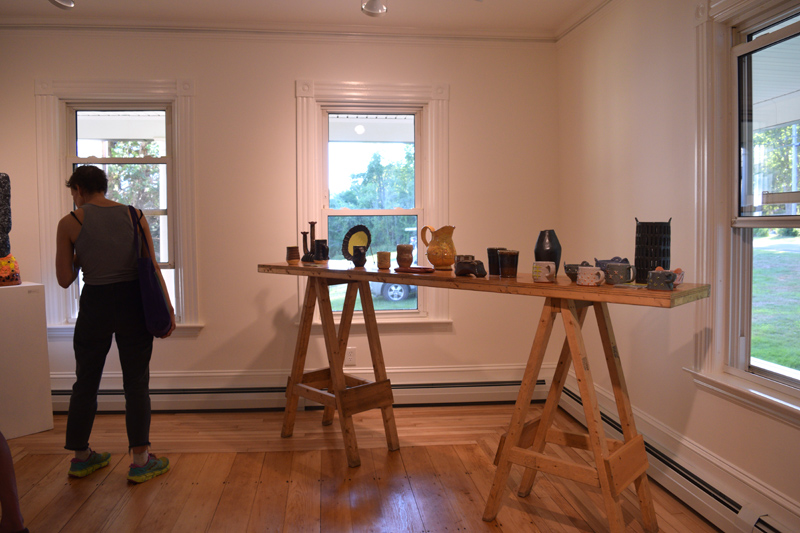 Ceramics on display at the open house for the Watershed Center for Ceramic Arts’ new building in Edgecomb on Tuesday, Aug. 20. (Jessica Clifford photo)

“Our vision is for all of our facilities to be heated and accessible year-round,” said Francine Rudoff, the executive director of Watershed Center for the Ceramic Arts.

In spring of last year, Watershed purchased the former house and its 22 acres of land. Funding to purchase the building came as a gift from the Joan Pearson Watkins Trust. The late Joan Watkins was a ceramicist and an educator dedicated to preserving and promoting the arts.

Prior to switching hands, the house was owned for roughly 150 years by the Cochran family, according to Hugh Sherman, who was related to the family who owned the house and was present at the open house.

In October, the Edgecomb Planning Board approved a change of use for the building.

According to Rudoff, renovations of the building took place from December 2018 until the end of May of this year.

Outside renovations included adding a new porch and an Americans with Disabilities Act-compliant ramp. 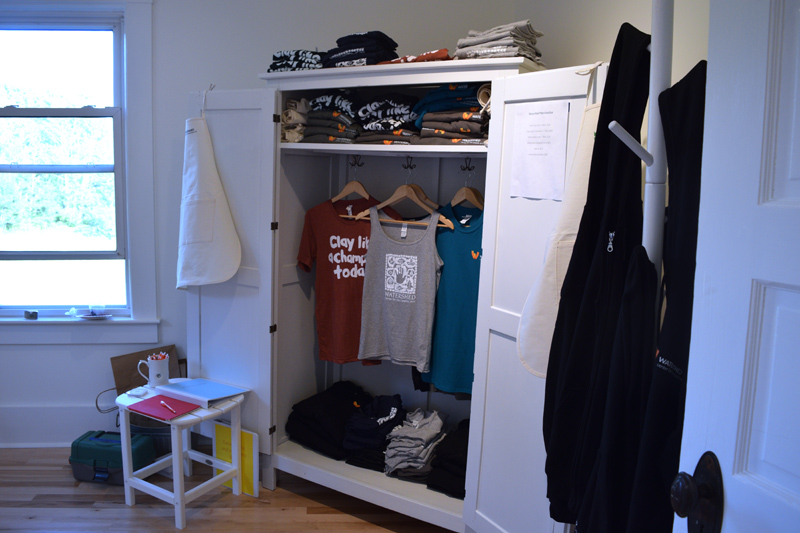 Clothing and and aprons for sale at the new Joan Pearson Watkins House. (Jessica Clifford photo)

The first floor “was pretty much gutted,” Rudoff said. Some of those renovations included redoing the walls, ceilings, and floors as well as adding an ADA-compliant bathroom downstairs. The renovations on the second floor were “mostly patching,” she noted. Renovations included the rewiring of all the electrical work and plumbing.

In total, renovations cost about $150,000. Funding to make these changes came from being awarded a grant by the Chester & Muriel Dawes Charitable Foundation, according to the nonprofit’s 2018 annual report.

Prior to Watershed staff members moving into the new offices in May, they worked out of the top floor of their dining building in the summer and one of the campus’ cabins in the winter, Rudoff said.

“We are thrilled to have professional year-round offices,” she said.

The crisp white walls of the first-floor gallery offer a clean backdrop for featuring ceramics primarily from artists in residencies and sometimes national and international artists. 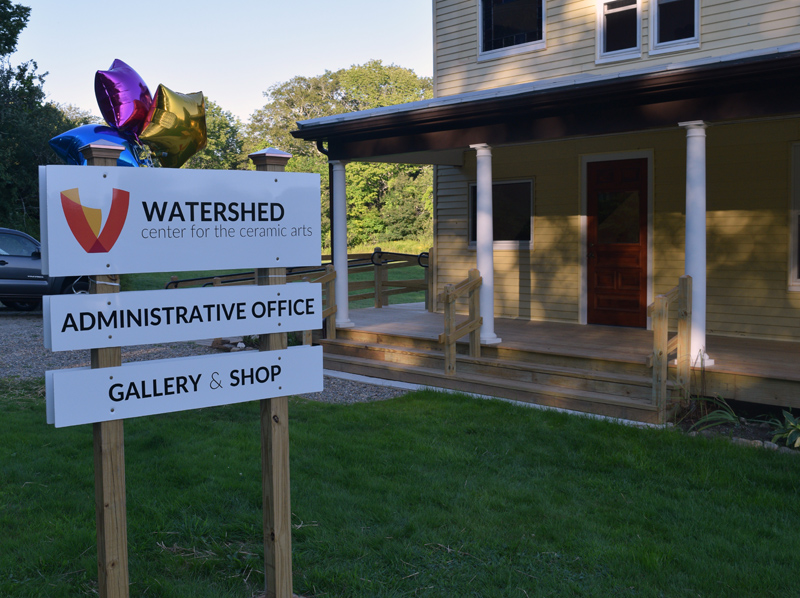 The sign in front of the newly renovated Watershed Center for the Ceramic Arts building, which will serve as an administrative office as well as a gallery and shop. (Jessica Clifford photo)

“We have artists that come to Watershed from all over the country and all over the world, and so it’s a real opportunity for people in Midcoast Maine to enjoy the work of artists they don’t typically get to see,” said Rudoff. “That is what we hope for this building, to bring new work to Maine.”

People can purchase items displayed in the gallery as well.

A small retail shop located in the back of the building on the first floor allows people to purchase T-shirts, aprons, and ceramics.

“Because we attract some of the biggest names in ceramic art to our residencies, we hope to be able to feature artists who are being nationally recognized for their work,” Rudoff said about people who will speak at the new building.

According to Rudoff, the downstairs is viewed as a community gathering spot for Maine ceramicists.

“We also see this as a space for the ceramic artists in Maine to come together and have a place where they can meet, have a meal, talk, network, and show their work together,” Rudoff said. 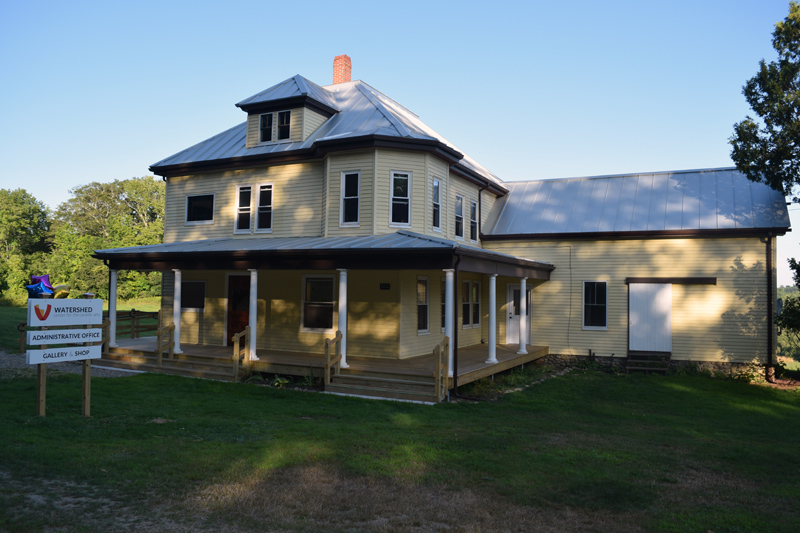 The Watershed Center for the Ceramic Arts’ building at 103 Cochran Road in Edgecomb has a new Americans with Disabilities Act-compliant ramp and porch. (Jessica Clifford photo)

The Joan Pearson Watkins House will be open from 9 a.m. to 5 p.m. Monday through Friday. The gallery is free to the public, although donations are appreciated, said Rudoff.

“We want to encourage people to stop by,” she said.

In addition to its regular hours, the gallery will be open for various events.

The first event taking place at the new building is an exhibition of new work by master and apprentice artists from the Craft Apprentice Program, which is a seven-month apprenticeship for Maine craft artists.

The Watershed Center for the Ceramic Arts campus, which comprises 54 acres altogether, contains Thompson Hall for dining and lounging, 12 cabin rooms, a studio, and the Joan Pearson Watkins House, spanning over Newcastle and Edgecomb.