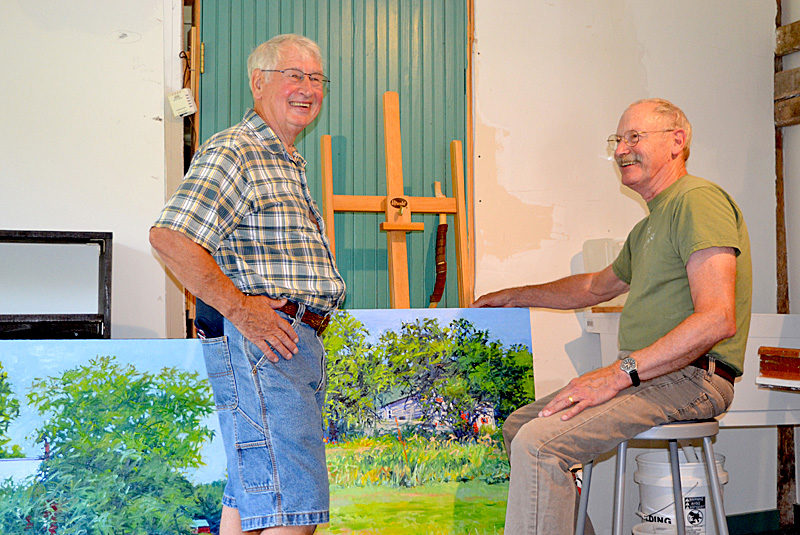 Jefferson artist John Kierstead (left) chats with Readfield artist J. Thomas R. Higgins in the barn studio Higgins occupied for the month of July as an artist-in-residence at the Joseph A. Fiore Art Center at Rolling Acres Farm in Jefferson. Kierstead, who owns one of Higgins’ paintings, was in attendance at the artist studio day and open house at the art center Saturday, July 30. (Christine LaPado-Breglia photo)

It was a perfect, sunny summer day on Saturday, July 30 – just the right kind of day for hosting an event such as the one that took place at the new Joseph A. Fiore Art Center at Rolling Acres Farm on Damariscotta Lake in Jefferson.

Visitors to the venue’s first artist studio day and open house wandered in and out of the two artist studios in the historic barn, chatting with artists-in-residence J. Thomas R. Higgins and Robert Pollien and perusing the artwork the two men had created over the course of their July residency at the art center.

Music by the talented Belfast-Portland duo of guitarist and vocalist Dave Johnson and mandolinist Rossi Meacham wafted across the expansive lawn and through the trees of the 130-acre property. Treats in the form of delicious Stone Fox Farm Creamery ice cream, coffee, and tea were on hand, adding to the pleasantness of the event.

Attendees were also free to take in the spacious interior of the farmhouse, featuring a gallery room containing paintings by Fiore, the late Maine artist for whom the center is named. Fiore passed away in 2008.

“In this program, it’s two organizations coming together – Maine Farmland Trust and the Falcon Foundation in Damariscotta, the holder of the artwork of Joseph Fiore,” said Anna Witholt Abaldo, speaking of the new artist residency program at the center.

Witholt Abaldo is co-director of the Joseph A. Fiore Art Center, along with David Dewey, a widely known watercolorist and curator at the Falcon Foundation. She also works for Maine Farmland Trust, having come on board with the organization almost eight years ago to start the Maine Farmland Trust Gallery in Belfast.

Witholt Abaldo explained that the Rolling Acres Farm property was “bought and preserved by Maine Farmland Trust several years ago. There are agricultural easements on it, so it can’t be developed.” As a so-called “buy/protect/sell” project, the property was put on the market, she said.

“We were looking for someone to farm the land,” said Witholt Abaldo. “We had a federal grant lined up (to help reduce the price of the land for a potential buyer), but that fell through; it was a mistake on the feds’ end.” The property was on the market for more than three years, she said, without a buyer. As selling to a developer was not an option, Witholt Abaldo and Dewey, whom she has known for a number of years, “started thinking creatively.”

The two started discussing possibilities for how to make best use of the land and they came up with the idea of creating an artist residency program on the property, in honor of Fiore. Each artist-in-residence receives a stipend – and the luxury of time in a beautiful place.

“The residency’s been great – the uninterrupted time and being away from home responsibilities,” said Higgins, a plein-air painter who hails from the Kennebec County town of Readfield. The retired college art teacher spent most of his career teaching painting and drawing at the University of Maine at Farmington and has relished his July residency.

“I stayed more inland and I focused on the farm,” said Higgins of his residency painting and drawing projects. “It’s been a number of years since I worked on pastoral subject matter.”

Higgins said he liked having the freedom to come and go and set his own schedule each day. He also enjoyed the catered Thursday night dinners in the farmhouse, which took place around a huge table made from wood recycled from Witholt Abaldo’s barn. 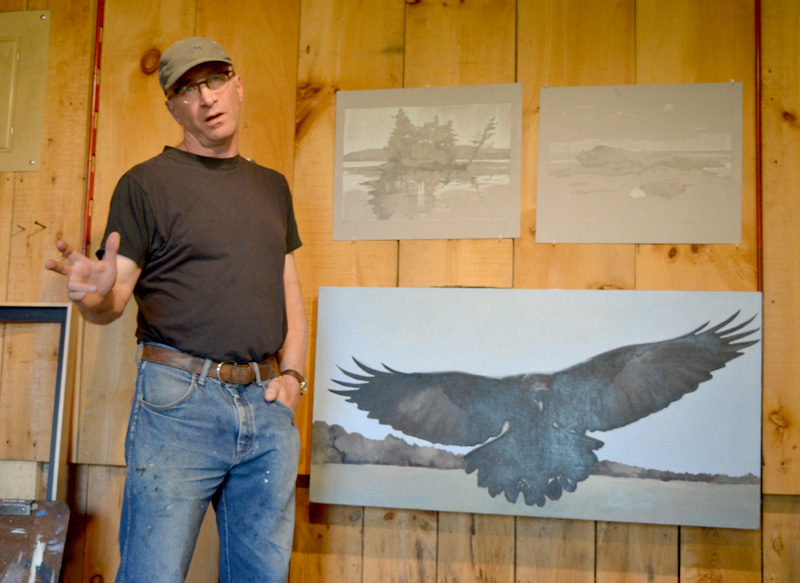 Bar Harbor painter Robert Pollien explains his process in the barn studio he occupied as a July artist-in-residence at the Joseph A. Fiore Art Center in Jefferson. (Christine LaPado-Breglia photo)

Like Higgins, oil painter Pollien, of Bar Harbor, was very happy about his month in residency. In addition to being able to spend uninterrupted time working on his art, he was also keen to be in a less crowded place than the Acadia National Park region. The park is celebrating its centennial this year and with that, said Pollien, come hordes of tourists – more than usual.

“That was part of my rationale for coming down here – escaping the crowds in Acadia and Bar Harbor. I thought I would opt out of a summer in Bar Harbor,” Pollien said, with a twinkle in his eye.

Pollien did the bulk of his painting on the farm and at Pemaquid Point, a place he had never visited before this residency.

“I spent a lot of time at Pemaquid,” he said. “That was sort of my go-to spot … Once I start painting a spot, I just start mining that place more and more. The light would change and I’d see more to paint.

“That was something!” he said of his couple of weeks painting Pemaquid. “I was looking forward to getting to know Midcoast Maine.”

On this second-to-last day of his residency, Pollien summed up his time at the art center: “It was really peaceful and a good time for reflection.” He said he will work some of the paintings he produced into larger pieces, and will get back to teaching painting and drawing at Artwaves in Bar Harbor.

On Tuesday, Aug. 2, two female Maine artists – Therese Provenzano, of Wallagrass, and Susan Smith, of Dover-Foxcroft – arrived at the art center for their month-long residencies.

“We really wanted to do Maine artists this year,” said Witholt Abaldo. “Next year, we may expand a little bit. We want to expand modestly.”

The Joseph A. Fiore Art Center is located at Rolling Acres Farm, 152 Punk Point Road, Jefferson. The venue’s next artist studio day and open house will take place from 11 a.m. to 3 p.m., Sunday, Aug. 28. Attendees are encouraged to bring a picnic lunch and enjoy the beautiful grounds surrounding the art center. Go to mainefarmlandtrust.org to learn more.