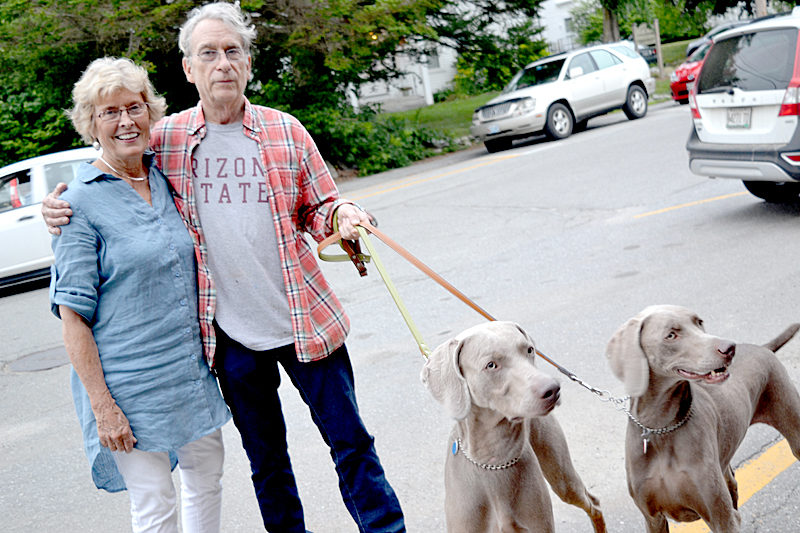 Jane Dahmen and William Wegman, with his Weimaraners Flo and Topper, outside Lincoln Theater in Damariscotta the evening of Thursday, July 14, shortly before Dahmen’s live interview with Wegman as part of the theater’s Talking Art in Maine: Intimate Conversations series. (Christine LaPado-Breglia photo)

It was a full house at the Lincoln Theater in Damariscotta the evening of Thursday, July 14. In fact, Andrew Fenniman, the theater’s executive director, announced just prior to the beginning of the Talking Art in Maine: Intimate Conversations event, hosted by Newcastle artist Jane Dahmen, that he had to turn people away. “We hit the fire limit,” he said.

The evening’s attraction was world-renowned artist William Wegman, a summer resident of the Rangeley area who is perhaps best known for his creative, entertaining photographs involving Weimaraners doing such things as sitting in a chair, standing on a pedestal, doing a handstand, and posing in an overcoat or a fancy thrift-store dress. Wegman is also a video artist, photographer, painter, and prolific creator of such books as “Dogs on Rocks,” “Funney/Strange,” and “William Wegman’s Mother Goose.” 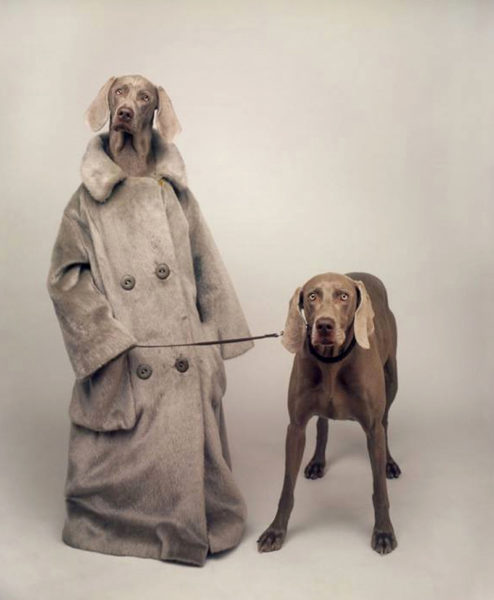 William Wegman’s Weimaraners Topper and Flo in “Walking the Dog.”

“Everybody knows some print of yours, some dog,” Dahmen said to Wegman as a slideshow of Wegman’s iconic Weimaraner photographs slowly played on the large screen behind where Wegman and Dahmen were seated onstage.

Dahmen mentioned Wegman’s photographic murals of his Weimaraners located at the busy rest stops on I-95 in Kennebunk.

“I get very upset when I see people stop to get coffee and urinate, and not look at the murals. Nobody ever does,” said a deadpan Wegman.

It was the first indication of how the night would go – full of tongue-in-cheek remarks and audience chuckles, and many representations of Wegman’s delightful artwork, including his trademark wacky short videos. Adding to the evening’s whimsical feeling was the fact that Wegman had brought along two of his dogs, Topper and Flo.

Dahmen praised Wegman for being one of the first artists to make videos as art, back in the early 1970s, videos that Wegman playfully said were the “first to be used by art historians for ‘recess,’ for a bit of fun at the end” of a presentation.

Likewise, his initial foray into photography was groundbreaking.

“I was throwing things off buildings, throwing things down rivers … I made photos of that,” said Wegman, emphasizing that he could have done such activities solely as performance art, but chose to document them as photographs.

At one point in the slideshow, Wegman paused on an image of a hand picking up a slice of cotto salami from a plate containing five slices.

He then told the story of how he was at a gathering and, inspired, “stole five or six pieces” of the salami from a plate of food and “rushed back to my studio and made a photograph.”

Wegman, who currently owns four Weimaraners, talked about and showed images of the numerous Weimaraners he has had and photographed over the years, starting with the oft-photographed Man Ray, whom he acquired in 1970 as a puppy when he lived in Los Angeles. 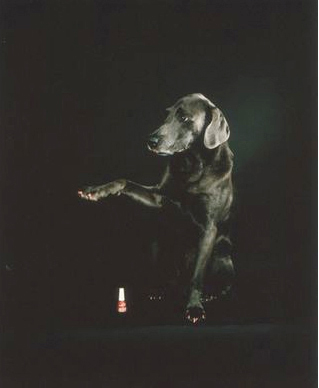 Wegman spoke of his transition from using only black-and-white photography to color photography via Man Ray as a subject.

“Here is my first color photo of Man Ray,” he said, pointing to the photo “Fey Ray,” from 1979, featuring Man Ray wearing red nail polish. It was made with a new-at-the-time Polaroid large-format camera.

Creating that photograph “kind of had the effect of breaking my manifesto of not using color,” said Wegman. It also enamored him of large-format photography, something he had not wanted to engage in before.

When a photo of one of his dog subjects wearing a large elephant trunk and tusks appeared on the screen, Dahmen noted that “everything has a funny undertone to it,” and complimented Wegman for the artistry of his Polaroid photographs.

“They’re beautiful,” Wegman said, “but I had nothing to do with it. They’re Polaroids – they just come out of the back of the camera.”

After showing a number of photo portraits of Fay Ray, the cinnamon-gray Weimaraner who stepped into Man Ray’s shoes after he died, Wegman came to Batty, who was pictured in one photo posing in a chair like a luxurious movie starlet and in another wearing a tousled curly brown wig.

“This is the funniest dog I ever had,” he said of Batty. “She was completely narcoleptic. She would fall asleep on the set.”

Toward the end of the evening, Wegman discussed the painting work he is currently engaged in – imaginative landscape paintings that incorporate collages of scenic postcards as a jumping-off point. One, 2012’s “Artists Including Me,” features postcards of the works of numerous famous artists, including Vincent Van Gogh, Frida Kahlo, Jackson Pollock – and Wegman.

“How many postcards do you have, Bill? Are you a collector?” said Dahmen.

“I have over 10,” Wegman said, to loud laughter from the audience.

Audience members were able to ask Wegman questions during a short question-and-answer period at the end of the event.

One person wanted to know how many shots Wegman takes before coming up with a final photograph of one of his dogs.

“The dogs are never up (on a pedestal or the like) for more than 30 seconds,” he said.

Another person asked, “Who sleeps with whom at night?”

“Four dogs are in bed with us,” Wegman said, of the sleeping situation with his wife and their dogs.

One last questioner asked a more academic question: “Can you talk a little bit about the use of text in art?”

“That’s too difficult a question for the summer,” he said, “but if you write to me in the fall … ”

Wegman’s interview was the final interview in this season’s Talking Art in Maine series.