A longtime summer resident of South Bristol and her sculptor neighbor have created a unique memorial to her late husband. 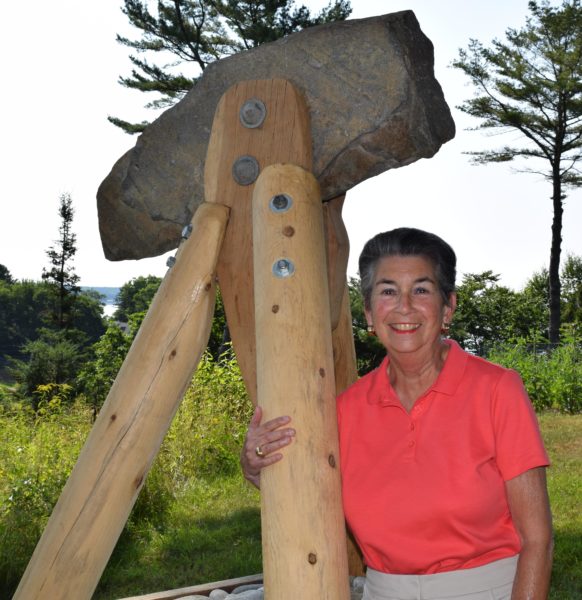 Penny Mardoian with “Art’s Rig,” a memorial to her husband of 51 years. (J.W. Oliver photo)

Penny Mardoian, of New Canaan, Conn. and South Bristol, has come to a home overlooking McFarland’s Cove for 62 summers – first to her parents’ cottage and then to a home she built with her husband, Arthur R. Mardoian.

A 1952 graduate of Rensselaer Polytechnic Institute in Troy, N.Y. with a bachelor’s degree in chemical engineering, he worked for Mobil Corp. – now Exxon Mobil Corp. – from 1954-1987.

The engineer and executive led a task force that built the first commercial “zeolitic catalyst” plant in the world and set up an emergency response system to react within minutes to a spill anywhere in the U.S.

When Arthur Mardoian died May 22, 2014, Penny Mardoian wanted to find a way to honor the memory of her husband of 51 years.

“I wanted something different,” she said. She had an idea for a memorial that would represent his career, and she brought her vision to a friend and neighbor, Peter Aalberg.

Aalberg, of Lutz, Fla., has come to South Bristol for 69 summers. A retired art teacher and sculptor, he has a number of large pieces to his credit, including a 12-foot movable lobster carving, which, he said, was once on the front page of The Lincoln County News.

After discussing the project with Penny Mardoian, he sketched a design and built a model last summer, then researched how to implement the design throughout the winter. This summer, he worked on the piece for a month straight. 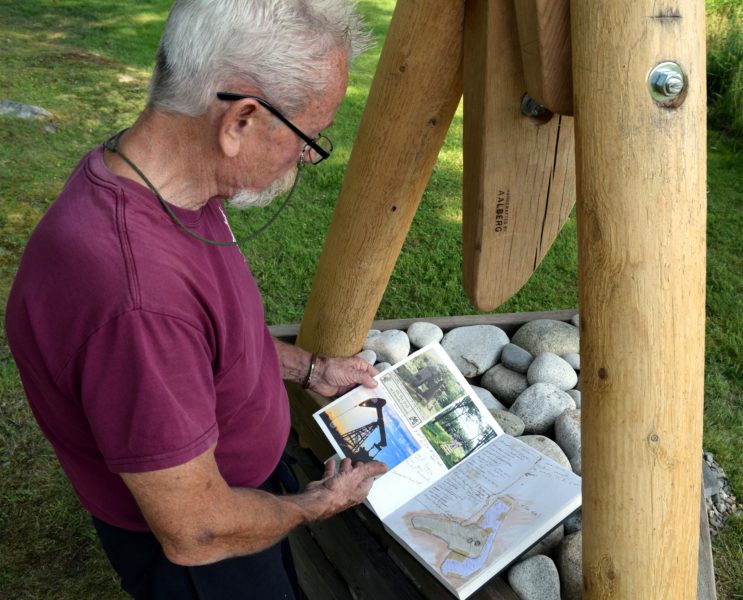 South Bristol summer resident Peter Aalberg points out a photo of an oil derrick in his sketchbook, which also contains drawings and plans for “Art’s Rig.” (J.W. Oliver photo)

The design of “Art’s Rig” draws on an oil rig for inspiration, with a “derrick” of wood and stone and a much larger stone as the “pump jack.”

Nearly all the materials in the sculpture have some personal significance, local connection, or both.

The rocks at the base of the sculpture are from a quarry in Walpole. Above these are smooth stones from local beaches the Mardoians would visit, at McFarland’s Cove and another cove nearby, and at Pumpkin Cove on Pemaquid Point. There are also stones from each of the other longtime homeowners in the neighborhood.

The red oak beams were cut in the area, and the bolts that connect the beams to the large stone at the top of the sculpture are from Gamage Shipyard.

Finally, the “pump jack” – the large stone at the top of the sculpture – comes from the Granite Hill Quarry in Bristol. “I looked at every rock in that quarry, I think,” Aalberg said.

South Bristol contractor Toby Plummer, whose Plummer Excavation operates the quarry, estimated the weight of the stone at 300 pounds, although Aalberg said it could easily be 500.

Scaffolding was erected around the sculpture for the installation of the stone. On July 13, Aalberg and four friends hung the stone in place. 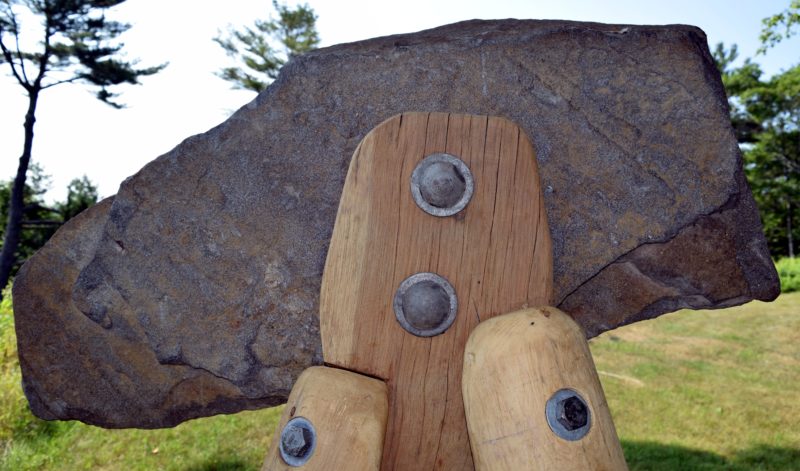 The stone at the top of “Art’s Rig” weighs several hundred pounds. The heavy bolts that hold the stone in place came from Gamage Shipyard in South Bristol. (J.W. Oliver photo)

Penny Mardoian and Aalberg had help from friends and local contractors throughout the process. “It was a real endeavor of a lot of people who cared,” Penny Mardoian said.

Aalberg still comes by almost every day to fuss over his work and make little adjustments, but only one small job remains before it’s complete. Penny Mardoian plans to add a plaque, which will read “Art’s Rig, dedicated July 22, 2016, in loving memory of Arthur R. Mardoian.” 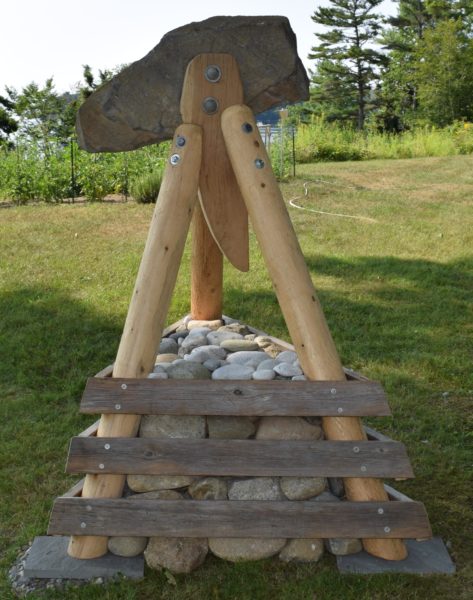