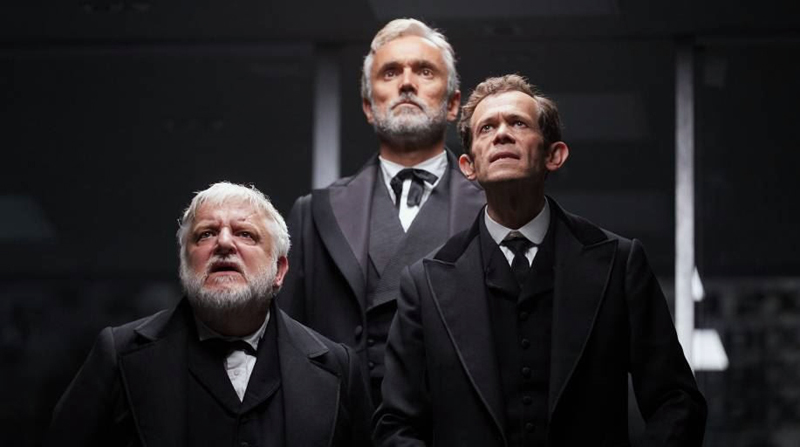 We are excited to have another weekend of classic songs by Rodgers and Hammerstein on our Lincoln Theater stage. Our Y-Arts camp friends return for their final musical for the summer, a highly acclaimed performance from the National Theatre in London is broadcast, as is one of the greatest concert films of all time. Exciting times ahead.

A Celebration of Rodger’s & Hammerstein’

Taste and imagination, the two key ingredients for a first-rate revue, abound in this fresh take on the Rodgers and Hammerstein canon presented by LCCT, the resident theater company of Lincoln Theater. This fully staged production, complete with orchestra and cast of more than 20 performers, is being created with direction and choreography by Emily Mirabile and music direction by John Mulcahy. This Rodgers and Hammerstein musical revue opened the 1994 Broadway season with flair and distinction, garnering wildly enthusiastic notices as well as earning two Tony nominations, including Best Musical.

The Rodgers and Hammerstein founding fathers probably never imagined “Shall We Dance?” as a comic pas de deux for a towering beauty and her diminutive admirer, nor did they suspect that one day a lovelorn young lad might pose the musical question “How do you solve a problem like Maria?” But that’s precisely the kind of invention lavished upon this revue, with innovative musical arrangements including a sultry Andrews Sisters-esque “I’m Gonna Wash That Man Right Out-a My Hair,” a swingin’ “Honeybun” worthy of the Modernaires, and a jazzy “Kansas City,” which leaves no question about how terrifically up-to-date the remarkable songs of Rodgers and Hammerstein remain.

Tap your toes and sing along in this splashy adaptation of the world’s most celebrated movie musical. “Singin’ in the Rain Jr.!” has all the makings of a Tinseltown tabloid headline — the starlet, the leading man, and a love affair that could change lives and make or break careers! In silent movies, Don Lockwood and Lina Lamont are a hot item, but behind the scenes, things aren’t always as they appear on the big screen. Meanwhile, Lina’s squeaky voice might be the end of her career in “talking pictures” without the help of a talented young actress to do the talking and singing for her.

Y-Arts Theater Music Camp is for grades one through nine. Campers immerse themselves in the art of musical theater during this two-week day camp, which focuses is on all areas of the dramatic arts and culminates on a junior Broadway musical. Come see and support the stars of the future. Performances: Wednesday, Aug. 21 at noon and 4 p.m. Tickets: $5 at the door.

“Stop Making Sense,” considered one of the best concert films ever created, was the first feature-length documentary effort of filmmaker Jonathan Demme. The director’s subject is the Talking Heads, a new-wave/pop-rock group comprising David Byrne, Chris Franz, Tina Weymouth, and Jerry Harrison. The film was made in 1984 during a three-day concert gig at the Pantages Theater in Hollywood. What emerges on screen says as much about director Demme’s taste and sensitivity as it does about the group and its visionary leader Byrne.

Written by Stefano Massini, adapted by Ben Power, and directed by Academy Award-winner Sam Mendes (“Skyfall,” “The Ferryman”), “The Lehman Trilogy” is the story of a family and a company that changed the world, told in three parts on a single evening and starring Simon Russell Beale, Adam Godley, and Ben Miles, who play the Lehman brothers, their sons, and grandsons.

On a cold September morning in 1844, a young man from Bavaria stands on a New York dockside dreaming of a new life in the new world. He is joined by his two brothers and an American epic begins. One hundred and sixty-three years later, the firm they establish – Lehman Brothers – spectacularly collapses into bankruptcy and triggers the largest financial crisis in history.

Movie tickets prices are $8 and $6. Event ticket prices vary. For more information, go to lcct.org, call the box office at 563-3424, drop by the theater at 2 Theater St., or email info@lcct.org. Theater office hours during the summer vary. Like Lincoln Theater on Facebook. Go to lcct.org to sign up for Lincoln Theater’s weekly e-blast. Follow the theater on Facebook, Twitter, and Instagram. Curtain going up!