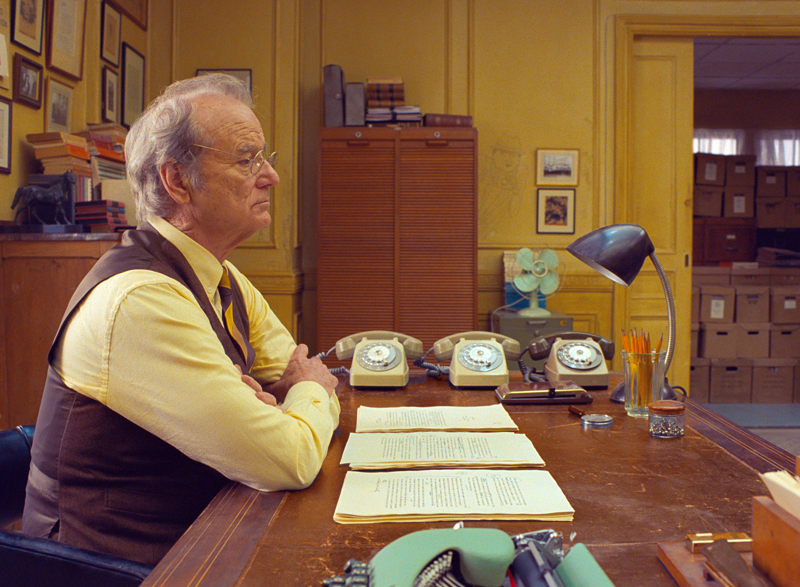 Bill Murray in a still from “The French Dispatch.” (Courtesy image)

“The French Dispatch,” opening Friday, Dec. 10, is the latest film from acclaimed director Wes Anderson. In this comedic fantasy, based on the history of The New Yorker magazine, writers are sent out in search of stories, only to return with a world of trouble. With a script co-written by Anderson, Roman Coppola, Hugo Guinness, and Jason Schwartzman, “The French Dispatch” is being considered by film critics as perhaps Anderson’s best film to date, and one that audiences will want to see more than once to be sure and catch all of his exquisite details.

The marriage of Princess Diana and Prince Charles has long since grown cold. Though rumors of affairs and a divorce abound, peace is ordained for the Christmas festivities at the queen’s Sandringham Estate. There’s eating and drinking, shooting and hunting. Diana knows the game. But this year, things will be profoundly different. “Spencer” is an imagining of what might have happened during those few fateful days.

‘The Danish Collector – Delacroix to Gauguin’

For many years no one was interested in the art of the Impressionists. Artists like Monet, Degas and Renoir were vilified, attacked, and left penniless as a result. Then, something remarkable happened. A new breed of collectors emerged and, before long, they were battling to acquire any work by these new, radical artists that they could find. Amongst them was the visionary Danish businessman Wilhelm Hansen. Exhibition on Screen tells his fascinating story and, with exclusive access to a sell- out exhibition at London’s Royal Academy, brings the extraordinary collection to the big-screen in glorious high-definition.

See the film that received a nine-minute standing ovation at the Cannes Film Festival. A love letter to journalists set in an outpost of an American newspaper in a fictional 20th-century French city that brings to life a collection of stories published in “The French Dispatch Magazine.” From writer and director Wes Anderson with an all-star cast featuring Benicio Del Toro, Adrien Brody, Tilda Swinton, Léa Seydoux, Frances McDormand, Timothée Chalamet, Bill Murray, Owen Wilson, and more.

The Met’s first-ever Live in HD transmission, the abridged, English-language version of Mozart’s “The Magic Flute,” returns to cinemas this holiday season. Tony Award–winner Julie Taymor conjures a spellbinding staging, replete with a kaleidoscope of color and parades of puppetry in this delightful production from 2006, featuring a stellar cast of Met stars including tenor Matthew Polenzani, baritone Nathan Gunn, and bass René Pape.

Tickets available at the door starting 30 minutes before showtime or online in advance at lincolntheater.net. Movie ticket prices are $8 and $6. Event ticket prices vary. For more information, go to lincolntheater.net, call the box office at 563-3424, or drop by the theater at 2 Theater St. in Damariscotta. Follow Lincoln Theater on Facebook, Twitter, and Instagram. Curtain going up!