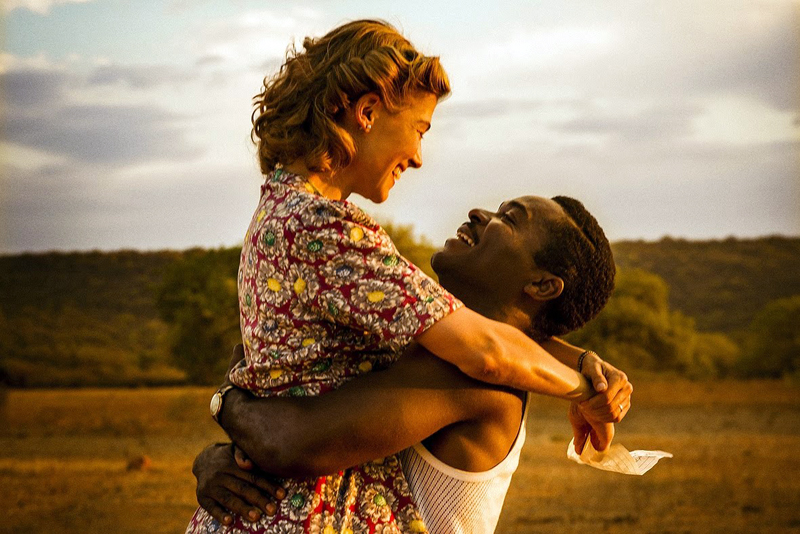 Rosamund Pike and David Oyelowo star in “A United Kingdom.”

We’ve decided to just set up a cot in the lobby and move into the theater this week.

Mia (Emma Stone), an aspiring actress, serves lattes to movie stars in between auditions and Sebastian (Ryan Gosling), a jazz musician, scrapes by playing cocktail party gigs in dingy bars, but as success mounts, they are faced with decisions that begin to fray the fragile fabric of their love affair, and the dreams they worked so hard to maintain in each other threaten to rip them apart. Final screening Thursday, March 30 at 2 p.m.

Based on extraordinary true events. In 1947, Seretse Khama, the King of Botswana, met Ruth Williams, a London office worker. They were a perfect match, yet their proposed marriage was challenged not only by their families but by the British and South African governments. Starring David Oyelowo, Rosamund Pike, and Jack Davenport. Playing at 2 and 7 p.m., Friday, March 31; 7 p.m., Saturday, April 1; 2 p.m., Sunday, April 2; and 2 and 7 p.m., Wednesday, April 5.

The Bolshoi takes on a new challenge in a triptych of works by three masters of modern choreography. The company performs “The Cage” by legendary choreographer Jerome Robbins, a master of visualizing and translating music to movement. Together with Harald Lander’s homage to classical ballet in “Etudes” and Alexei Ratmansky’s colorful folklore-inspired “Russian Seasons,” “A Contemporary Evening” brings some of the best dancers together with masters of contemporary choreography. Playing Sunday, April 2 at 7 p.m.

The Red Sox will host their 117th opening day against the Pittsburgh Pirates. Beer will be available to purchase courtesy of our partners at King Eider’s Pub. Come catch it, free, on the big screen at Lincoln Theater on Monday, April 3. Pre-game activities begin broadcasting at 1 p.m. Game begins at 2:05 p.m.

‘The Poets and the Assassin’ (live)

Presented by students of Bates College and under the direction of Kati Vecsey, Reza Jalali’s play offers a historic and contemporary insight into the plight of women in Iran, a society shrouded in mystery, by challenging our assumption about a land that was once home to the powerful Persian Empire, and its women. Live on stage, Monday, April 3 at 7:30 p.m.

Lincoln Theater will screen “1984” (R), starring the late John Hurt, as part of a day of showings of the film around the nation. Given today’s polarizing political environment, we are screening the film as an invitation to explore our community and how we and our neighbors think and understand the world. In Orwell’s cautionary novel, Winston Smith, a bureaucratic flunky living in a totalitarian state, breaks the law by falling in love with Julia. Attempting to escape, Winston and Julia are tracked down by the Thought Police and “re-educated” into loving the State. There will be a facilitated conversation after the movie. We hope you’ll join us Tuesday, April 4 at 7 p.m.

Tamsin Greig is Malvolia in a new twist on Shakespeare’s classic comedy of mistaken identity. A ship is wrecked on the rocks. Viola is washed ashore but her twin brother, Sebastian, is lost. Determined to survive on her own, she steps out to explore a new land. So begins a whirlwind of mistaken identity and unrequited love. Where music is the food of love, and nobody is quite what they seem, anything proves possible. Playing Thursday, April 6 at 2 p.m. (live from London) and 7 p.m. (rebroadcast).

Daniel Radcliffe live from London in “Rosencrantz & Guildenstern are Dead” on Thursday, April 20.