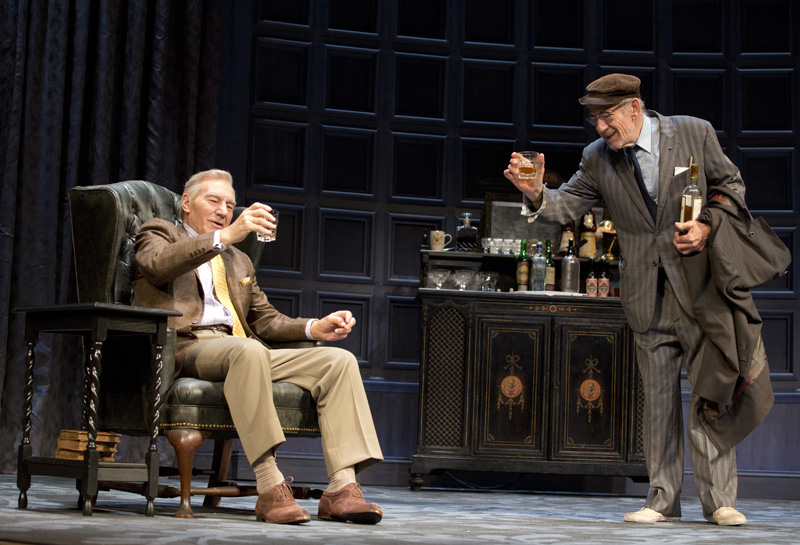 Patrick Stewart (left) and Ian McKellen in “No Man’s Land.”

This week is special. Not only do we have an encore broadcast of a play from London, we have an afternoon live concert — with the shades up and hopefully the sun streaming in. Follow this up with a romantic comedy, this time in Hebrew. Why not?

One summer’s evening, two aging writers, Hirst and Spooner, meet in a Hampstead pub and continue their drinking into the night at Hirst’s stately house nearby. As the pair become increasingly inebriated, and their stories increasingly unbelievable, the lively conversation soon turns into a revealing power game, further complicated by the return home of two sinister younger men. Stars Ian McKellen and Patrick Stewart, “No Man’s Land” was captured live on Dec. 15, 2016. Plays at 2 and 7 p.m., Thursday, July 13.

VentiCordi’s evocative opening program invites the audience into the world of a composer’s inspiration. Be it a place, a poem, or another composer’s work, there is always a seed that sparks the imagination. The program includes Gian Francesco Malipiero’s “Epodi e Giambi” for violin, oboe, viola, and bassoon; Hillary Tann’s “The Walls of Morlais Castle” for oboe, viola, and cello; Karl Stamitz’s Quartet for bassoon, violin, viola, and cello; J.S. Bach/Mozart’s Prelude and Fugue No. 4 in F major for violin, viola, and cello; and Arnold Bax’s Quintet for oboe and strings. Tann took her inspiration from a Scottish castle, Malipiero from poetic form, and Mozart took his cue from Bach. Features Kathleen McNerney, oboe; Wren Saunders, bassoon; Dean Stein, violin; Robert Lehmann, violin and viola; Kimberly Lehmann, viola; and Ashima Scripp, cello. Performance at 4 p.m., Friday, July 14.

At 32, Michal (played by Noa Kooler), an Orthodox Jewish woman, is finally looking forward to the comfort and security of marriage, when she is blindsided by her fiance’s decision to call off the wedding with only a month’s notice. Unwilling to return to lonely single life, Michal decides to put her trust in fate and continue with her wedding plans, believing Mr. Right will appear by her chosen date. Confident she will find a match made in heaven, she books a venue, sends out invitations, and buys a wedding dress, as her skeptical mother and sister look on with trepidation. During Michal’s month-long search for a spouse, she enlists the help of two different matchmakers, goes on a series of disastrous blind dates, and finds an unexpected connection with a charming but utterly unsuitable pop star (Oz Zehavi) – all while dismissing pleas by concerned friends and family members that she reconsider her risky plan. As the day of the ceremony grows closer and no suitor appears, Michal puts everything on the line to find happiness. In Hebrew with English subtitles. Plays at 7 p.m., Friday, July 14; and at 2 and 7 p.m., Saturday and Sunday, July 15 and 16, and Wednesday, July 19.

America in the mid-1980s. In the midst of the AIDS crisis and a conservative Reagan administration, New Yorkers grapple with life and death, love and sex, and heaven and hell. Andrew Garfield (“Silence,” “Hacksaw Ridge”) plays Prior Walter along with a cast including Denise Gough, Nathan Lane, James McArdle, and Russell Tovey. This new staging of Tony Kushner’s multi-award-winning two-part play, “Angels in America: A Gay Fantasia on National Themes,” is directed by Olivier and Tony award-winning director Marianne Elliott. Broadcast live from London at 2 p.m. on Thursday, July 20 and rebroadcast at 7 p.m. “Angels in America: Part II, Perestroika,” broadcasts live the following week.