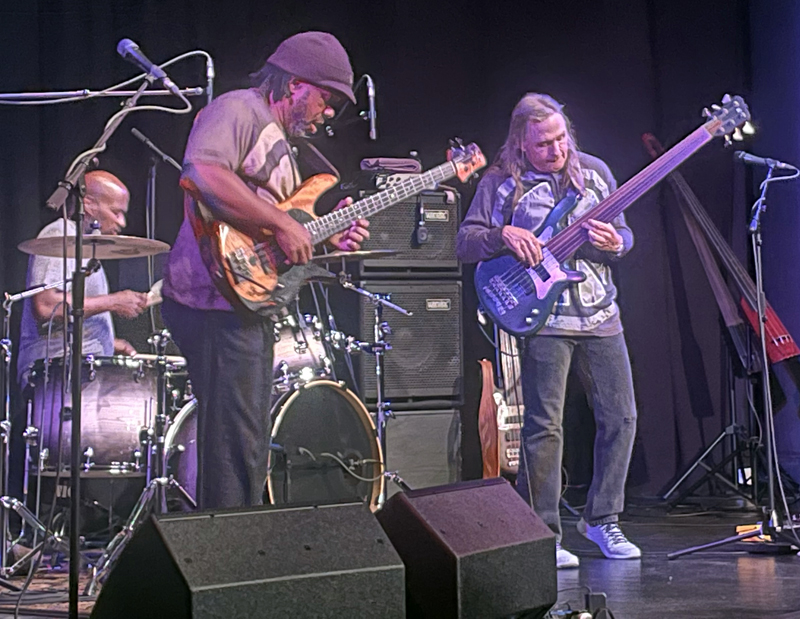 Accompanied by drummer Derico Watson, the trio burned through a set of new and old material spanning the band’s three-decade tenure. Taking the stage shortly after 8 p.m. the band burned three song tracks including new tunes “Home Bass,” “The Chrome Addict,” and the older “Not at 3,” off their 1998 release “Cookbook,” before Wooten and Watson left the stage for an extended solo by Bailey.

During his extended spot, Bailey quoted a selection of Beatles tunes, at least one jazz standard, and “Stairway to Heaven.”

In the dazzling tune “Patchwork,” Bailey and Wooten exchanged rhythm and melody parts measure by measure.

Wooten closed the show with an extended solo, later joined by Watson in jam, changing time signatures on the fly. The band closed the set with the moody “S’Low Down,” the title track from their current CD, before coming out for an encore, using instruments loaned earlier that evening by Nobleboro-based NS Design. Wooten played the electric cello while Bailey played an electric upright bass.

The concert was sponsored in part in the Midcoast Music Academy, a community music school based in Rockland serving students ranging in age from 8 to 76. According to Jen Feldman, Midcoast Music Academy executive director, the band came prepared to assist the house, bringing three subwoofers with them from Boston. After the show, Bailey and Wooten both praised the sound in the theater.

Before the concert, the trio conducted a free master class open to anyone in the community. Ninety-seven people attended the workshop according to Keri Lupien, president of The Waldo Theatre Board of Directors. 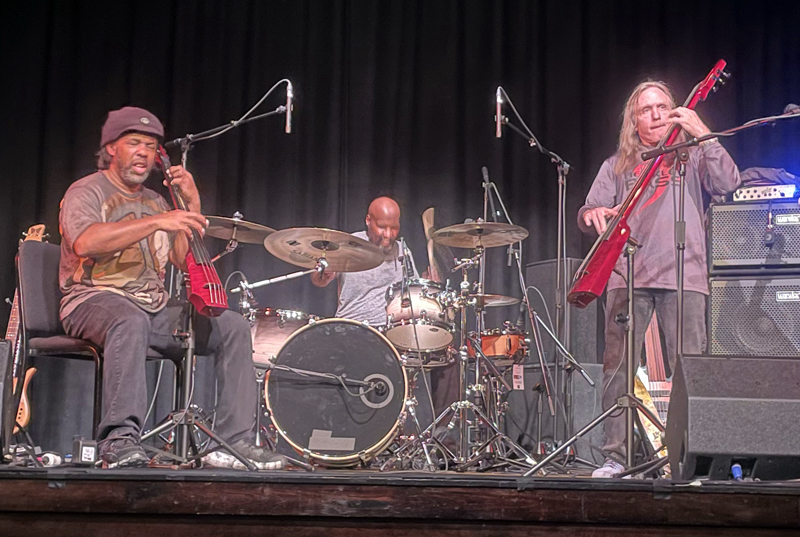 During the workshop, Wooten, Bailey, and Watson shared their philosophies on music, practice, playing with ensembles, and avoiding discouragement.

“In your head you’re making it hard,” Wooten said. “The instrument doesn’t determine what the style is. The musician does. It’s like saying, ‘my mouth won’t speak German. It’s not a German mouth.’”

Wooten also stressed the point that music is not a competitive pursuit. It’s collaborative.

“Nobody can express you better than you, so at that point, you’re the best,” he said. “Willie Nelson may not be the best guitarist, but he is the best Willie Nelson, and he knows that. So what happens is we love Willie Nelson.”

Although only scheduled from 5:30-6:30 p.m., Wooten insisted on taking every question, extending the session until after 7 p.m.

After the show, Wooten and Bailey met fans at the merchandise table in the theater’s lobby. Their post-show appearance felt more like a meet-and-greet than an autograph session. The two took pains to give dedicated time and attention to every individual in line, happily dispensing autographs, posing for pictures, and offering words of encouragement.

Later, both men said they enjoyed their brief visit to Waldoboro.

“This theater is nice,” Wooten said. “I love these small theaters. Even though it is dark during the show, we saw the theater earlier. It’s nice and small. You feel connected to everybody here. I had a really good time.”

“Creative booking agents find venues outside our normal,” Bailey said. “There are these places where we usually go but almost every run, there’s like a couple places, just like here – great people and great food.”

Bass Extremes has been a touring unit for 30 years. Wooten is a five-time Grammy Award winner and a founding member of the supergroup Béla Fleck and the Flecktones. He has been called the most influential bassist of the last two decades and was listed as one of the top 10 bassists of all time by Rolling Stone magazine.

Bailey is a pioneer of the six string fretless bass whose techniques are studied around the world. Bailey currently chairs the bass department at the Berklee College of Music in Boston, where Wooten is currently teaching as a scholar in residence.

For more information about Bass Extremes, go to bassextremes.com.

To learn more about The Waldo Theatre, go to thewaldotheatre.org.