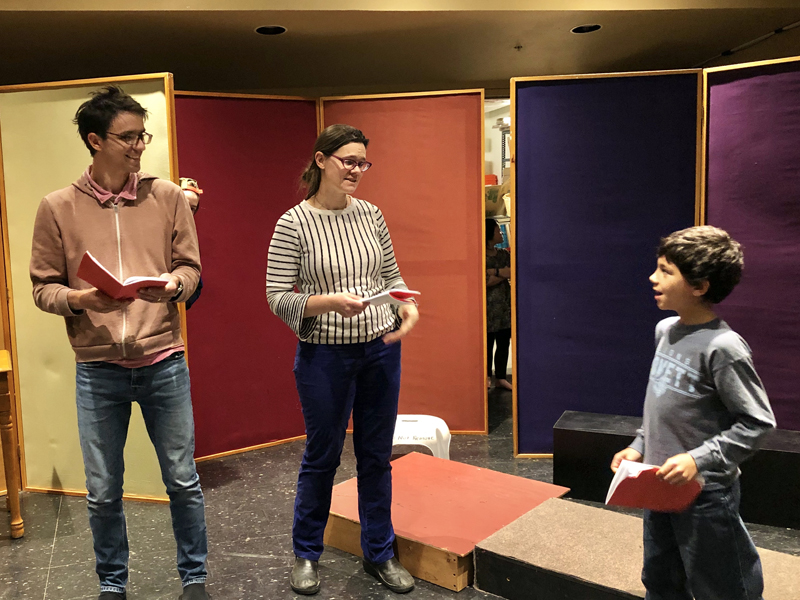 Allison Eddyblouin and Mike Lee laugh with Davis Awamleh in a scene from the The Best Christmas Pageant Ever.

River Company’s production of “The Best Christmas Pageant Ever,” written by Barbara Robinson, based on her book of the same name, can be seen for one weekend only: Dec. 6 and 7 at 7 p.m. and Dec. 8 at 3 p.m.

River Company Board member Allison Eddyblouin is the director of the show and also plays the role of Mother. The character of Mother, or Grace Bradley as she is known, becomes the default pageant director of the church Christmas pageant when no one else wants to do it.

The role of Father, Bob Bradley, will be played by Mike Lee. The children of Grace and Bob are Beth and Charlie, played by Lila Neptune-Benner and Davis Awamleh, respectively. Beth serves as the narrator of the play, helping to reveal exactly what it means when the local family of troublemakers, the Herdmans, join the church pageant in order to get free food.

Lilly Mae Awamleh stars as Imogene Herdman, who fights for the role of Mary in the pageant and signs up her brother Ralph, played by Eli Jones, to play Joseph.

Mothers of children in the show also play mothers within the show: Mrs. McCarthy is played by Kerry Stapp, Mrs. Slocum is played by Cassandra Neptune-Benner, Mrs. Clausing played by Elisabeth Awamleh, and Mrs. Clark by Mallory Adams.

The rest of the cast is rounded out by Cynthia Seigars as Mrs. Armstrong, Sumner Richards as the Rev. Hopkins, and Mert Apinwall as the fireman.

All performances are in Porter Meeting Hall at Skidompha Library, located at 184 Main St., Damariscotta, via the Elm Street entrance. Ticket sales from all performances will go to benefit local food-for-scholars programs in the Central Lincoln County School System, AOS 93. Tickets will be sold at the door a half-hour before showtime or can be reserved in advance by calling 522-2797, or to purchase online, go to rivercompany.ticketspice.com/the-best-christmas-pageant-ever.

River Company’s mission is to provide a local arena for artists to gain theatrical experience that fosters artistic growth. River Company’s work reflects and entertains its community through its creativity, flexibility, and versatility.