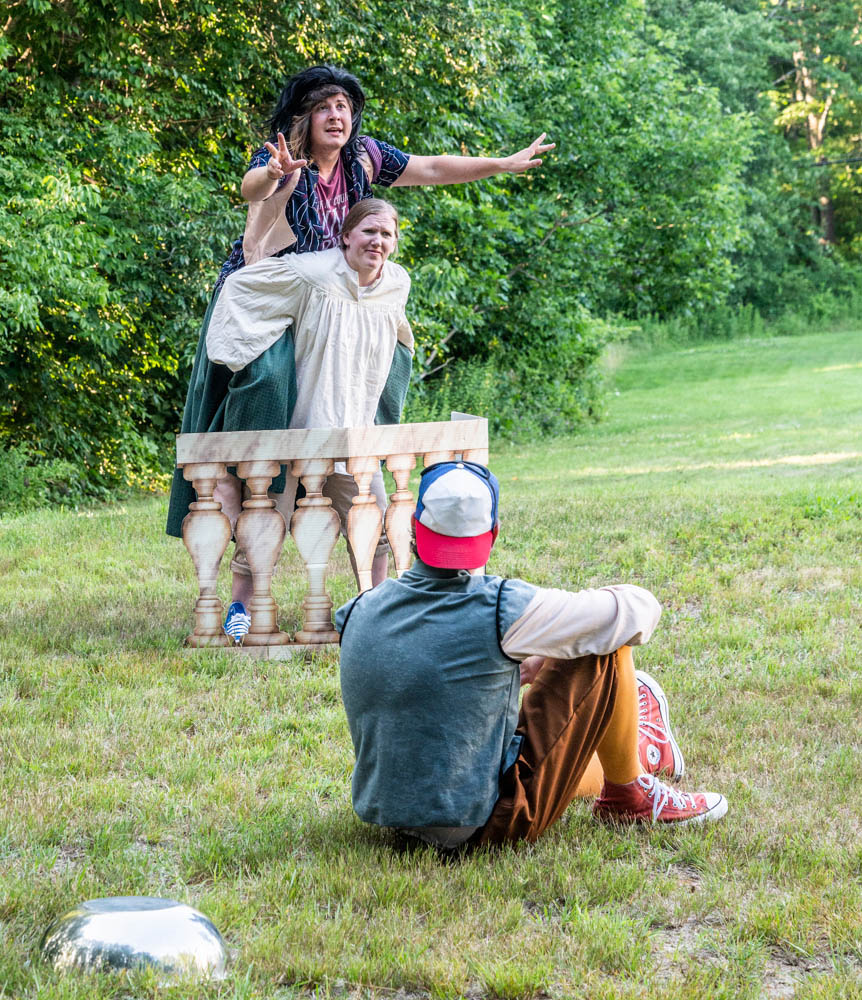 Emily Sue Barker (center) supports Roosevelt Bishop as he plays Juliet to Soren Barker’s Romeo during a rehearsal for “The Complete Works of Shakespeare (abridged)” at the Edgecomb Community Church labyrinth on July 11. Bishop said they could have had Barker play all the female roles “but where’s the fun in that?” (Bisi Cameron Yee photo)

For two weekends in mid-summer three actors will walk into a labyrinth and hilarity will ensue. River Company is bringing its second Shakespeare-based production to the circle of stones at the Edgecomb Community Church, but this is no typical rendition of a traditional Shakespeare play.

The Boothbay-based actors are the catalyst behind the piece, bringing the idea of performing the three-person show to director Nick Azzaretti who in turn recommended the play be River Company’s summer offering.

Emily Sue Barker, who plays the preeminent Shakespeare scholar in the play, said River Company’s production of “The Complete Works of Shakespeare (abridged)” is “an absolutely ridiculous romp of hilarity and literary humor. It’s smart but absolutely insanely funny. It does a good job of mixing farce with wit.”

Roosevelt “Robo” Bishop, who provides much of the comic relief and plays almost all of the female roles in the play, called it “Chaos incarnate. Equal measures of ad lib and actual Shakespeare text.”  He said that for those who are intimidated by Shakespeare and the sort of “hoity-toity” associations with the Bard, “this play certainly illustrates how irreverent Shakespeare can be.”

According to an alliteration-loving Soren Barker, who fills the on-stage role of the troupe leader, the production is “a riotous romp through Shakespeare; a wild and wacky weird show.”

Soren Barker and Bishop have known each other since they began acting as kids with the Y-Arts program in Boothbay. Soren Barker called them “the OG generation for Y-Arts back when it started.”

Soren Barker reconnected with Bishop during a performance of “South Pacific” at the since-closed Boothbay Playhouse. Emily Sue Barker also performed in the show.

The three soon became fast friends thanks to a mutual love of theater and all things nerdy, including “The Lord of the Rings” and “Star Wars.” The Barkers introduced Bishop to Dungeons and Dragons and the trio began to stretch their already formidable talents by playing long-form role-playing games several nights a week.

The games had a big impact on their theatrical relationship. “There’s a lot of improv in character that happens during D&D,” Emily Sue Barker said.

The Barkers were already familiar with “The Complete Works of Shakespeare (abridged)” and along with Bishop they brought the idea of performing the piece to Azzaretti who embraced the idea enthusiastically.

Azzaretti said the production is a natural extension of the relationship between the three actors. He saw his role as “a shaping hand and responsive observer,” their first audience, albeit a critical one.

While the show is a loosely formed improvisational comedy, Azzaretti said the actors still draw on their acting chops. He said that while Bishop’s character starts out dismissive of Shakespeare “it’s as if the language ropes him in and he can’t help but commit to the drama of the moment as an actor.” In those moments both character and actor are moved, and in turn move the audience.

Azzaretti said he has never been a very authoritative director. During rehearsals he suggested ways to make gestures broader to help a joke land, ways to use their life experiences to inform performances, but he credits the actors with the meat of their performances.

“I feel honored to have their trust,” he said. “And I’m having fun.”

While the play is completely irreverent, it’s clear that Shakespeare himself is revered by all the participants and they are eager to share their appreciation of the Bard with an audience.

Bishop came to his love of Shakespeare through a production of “Peter Pan” he performed in at the age of 10. The play included a bit that referenced “Hamlet” and Bishop didn’t get the joke. He asked his father to explain it and instead his father gave him a compilation of all Shakespeare’s plays and said they should read through it together.

“He gave me such a gift by introducing me to literature in such an involved and passionate way,” Bishop said of his father.

Emily Sue Barker wants people to see more Shakespeare performed as opposed to reading it. “It’s easy to get really bogged down in the language but an actor can give those words the meaning,” she said.

Soren Barker said many of Shakespeare’s works were not original stories – many of them already existed. “(Shakespeare) said ‘I bet I could tell that better’ and he did,” he said. “That’s why his version of the story has lasted 400 plus years.”

“Shakespeare is quite rude and crude,” Emily Sue Barker said. “He has an image of being super intelligent, super intellectual and philosophical which he is that too, but he was also trying to entertain peasants who paid two pennies for a seat.”

The groundlings were those members of Shakespeare’s audience that couldn’t afford seats. According to Soren Barker, they were regular folks out for a good time who liked blood and guts, bawdy humor, action, ghosts, murder, bloodshed – “all the stuff we see in pop culture.”

River Company was welcomed back to the labyrinth at the Edgecomb Community Church after performing “A Midsummer Night’s Dream” there in August of 2021. Pastor Kate Pinkham had a mission to open up the space to the community and hosting Community Theater was one way to do so.

“When you remove that structure of the theater you have to use your imagination more.  It blows the boundaries off of the rectangle that is the theater, the TV screen or your phone and makes it more boundless and limitless. It makes it freer and more alive,” Soren Barker said.

Bishop praised “the freedom of a stage that goes on and on and on. Without constraints expression has no limits and that’s what the labyrinth has provided for us,” he said.

Emily Sue Barker likes how it ties into the Shakespeare in the Park idea which started at Central Park in New York City in the 1950s and has since expanded to include any open-air Shakespeare performance by an acting troupe.

“You don’t really need a set – it’s just a silly show … we adapt, weave around the people wherever they happen to be. We’ll be darting between people if we have to,” she said.

“The Complete Works of William Shakespeare (abridged)” was originally written by Adam Long, Daniel Singer, and Jess Winfield, former founding members of the Reduced Shakespeare Co., an American touring troupe that specialized in humorous abridgements of exhaustive works or topics.

The play was first performed in the early 1980s, but it was written to be altered to be updated at each performance. That makes it easy for experienced improvisational players like Bishop and the Barkers.

“Ad lib is as much a part of it as anything else. It is very easy to sometimes drop a line or lose a cue … the line between farce and mistake is a very, very thin one,” Bishop said.

“The more the audience engages with us the more fun we’re going to have,” Emily Sue Barker said. “We’ll riff off the audience for sure.”

“The past couple of years have been heavy, we’re still dealing with tough stuff, the echo and hangover of the pandemic,” Soren Barker said.  That’s why he finds it “so glorious to come together to make a community in a safe space … We need this perfect blend of heightened, beautiful, complex literature and an examination of the human condition. And at the same time a good laugh.”

Azzaretti said that live theater will be around “as long as people have a need to perform” something he believes is a part of human DNA.

“Theater is never about the final product, it’s about the process of what you do as a community bringing it together,” he said. “Why would people do something like this voluntarily unless they were doing it for love? Love of each other, and love of the community.”

Performances of “The Complete Works of William Shakespeare (abridged)” will be outside at the Edgecomb Community Church labyrinth at 15 Cross Point Road in Edgecomb. Audience members are encouraged to bring picnic blankets or chairs for seating.

Productions canceled or postponed due to inclement weather will be rescheduled or refunded. To reserve tickets, call 449-2943 or go to rivercompany.org.