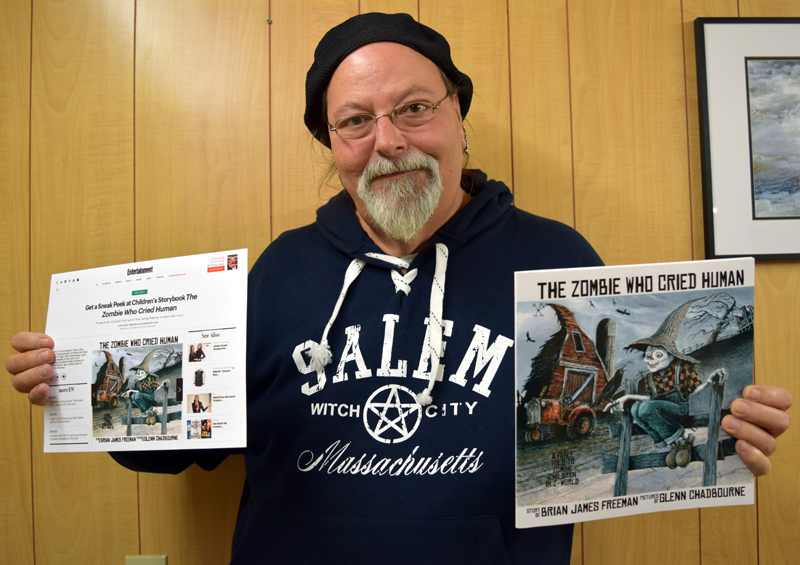 Newcastle artist Glenn Chadbourne holds a print-out of an Entertainment Weekly post about his forthcoming book (left) and an advance copy of the book, “The Zombie Who Cried Human.”

A “sneak peek” of a forthcoming children’s book illustrated by Glenn Chadbourne, of Newcastle, is available on Entertainment Weekly’s website.

The book, “The Zombie Who Cried Human,” is the first of three in the “Little Gruesome” book series by Brian James Freeman, with illustrations by Chadbourne.

The series is the brainchild of Freeman, a friend of Chadbourne’s. Freeman works at Cemetery Dance Publications, the publisher of many Chadbourne works.

Freeman asked Chadbourne if he would be interested in collaborating on “a creepy children’s book,” Chadbourne said. “I said, ‘That sounds right down my alley,’ so he sent me the text and I went to work.”

The books are essentially Aesop’s Fables with zombies. “The Zombie Who Cried Human” is a play on “The Boy Who Cried Wolf.”

In the book, a family of zombies leaves their young son home alone. Responsible for the family’s human farm, he decides to play a prank on residents of the nearby town and raise the alarm of wild humans come to free the humans in captivity at the farm.

Chadbourne worked on the illustrations for almost a year.

“I’m very proud of it,” he said. “It’s something completely different for me.”

While the book stars zombies who farm humans for zombie consumption, Chadbourne deems it child-appropriate. “I would rate it G, definitely,” he said.

“There aren’t any brains popping out or worms or anything like that,” he said, and like the original fable, the book contains a moral. “The moral is, always be honest.”

Cemetery Dance Publications will publish the book in April 2018.

The Entertainment Weekly website published a sneak peek at the book for Halloween.

“To scare or not to scare?” a post on the website reads. “That is the question most parents of little kids face this time of year. With Halloween upon us, EW presents a first look at an upcoming storybook that answers in the affirmative: yes, a little scare is good for the soul.”

The post includes a gallery of seven of Chadbourne’s illustrations from the book. The sneak peek is available at ew.com/books/the-zombie-who-cried-human-sneak-peek.

The book has also been featured on the website bloody-disgusting.com, which Chadbourne called “the biggest horror site in the galaxy.”

“Everybody seems to like it, which thrills me,” Chadbourne said.

Chadbourne expects to start work soon on the illustrations for the next entry in the series, “The Fast Zombie and the Slow Zombie,” an adaptation of “The Tortoise and the Hare.”

Other ongoing projects include illustrations for a series of three books by the British horror writer Ramsey Campbell and a novella about a haunted lighthouse by Richard Chizmar, founder of Cemetery Dance Publications.

Horror fans around the world know Chadbourne for his collaborations with Stephen King, while locals know him as a 1978 graduate of Lincoln Academy, the editorial cartoonist of The Lincoln County News, and a painter of pumpkin monsters.

“The Zombie Who Cried Human” is available for preorder at cemeterydance.com. A trade hardcover edition costs $19, while a special edition goes for $65.

“I was a kid who loved creepy stuff and here I am because of it, so hopefully kiddies out there will enjoy it and adults as well,” Chadbourne said.