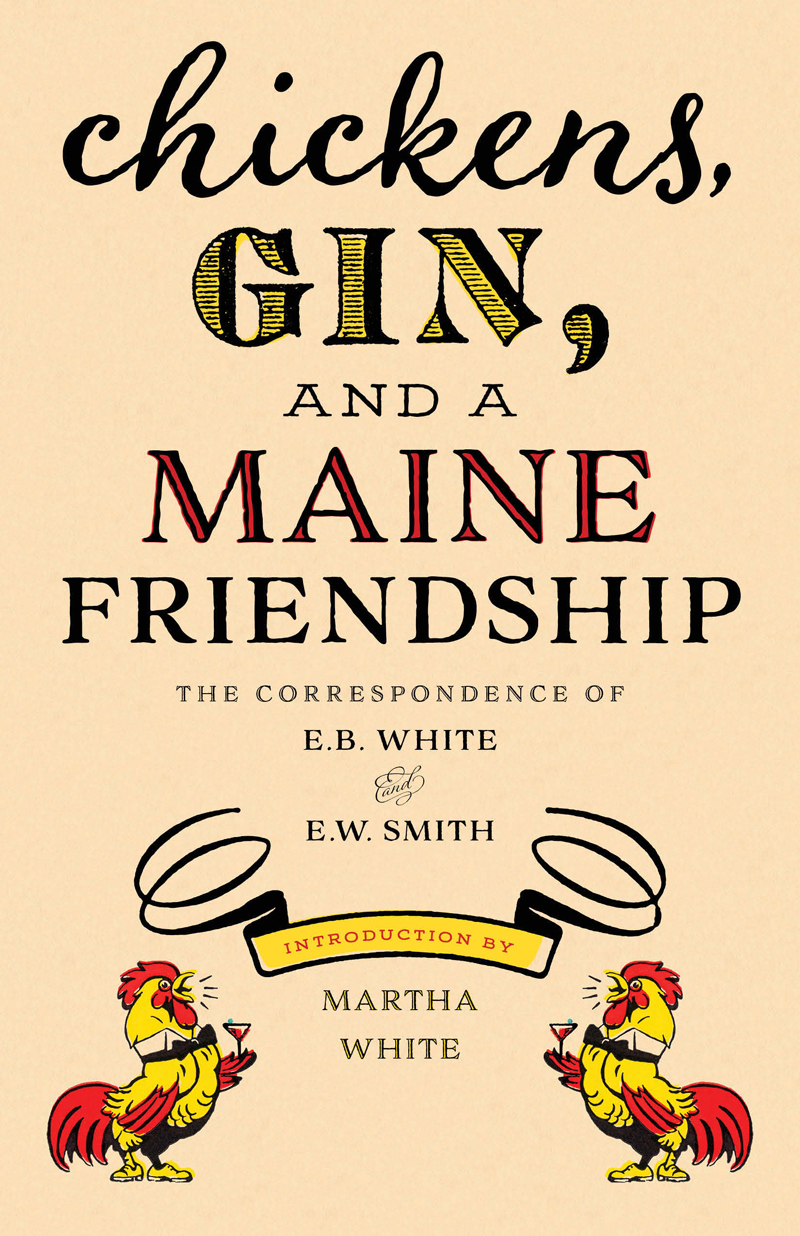 The cover of “Chickens, Gin, and a Maine Friendship: The Correspondence of E.B. White and E.W. Smith.”

The book world rarely sees a new book with such an unusual history as “Chickens, Gin, and a Maine Friendship: The Correspondence of E.B. White and E.W. Smith,” published by Down East Books in 2020.

New work by a famous, long-deceased writer is always big news. But two such writers in the same book? This book comprises correspondence between White and Edmund Ware Smith during the 1950s and 1960s, when both had residences in their beloved Maine. The letters lay forgotten in a Damariscotta bank vault for nearly four decades and were discovered by a staff member at Skidompha Public Library, who realized immediately that they should be published.

E.B. White (1899–1985) was an enormously popular writer and author, a longtime contributor to The New Yorker and other publications, perhaps best known to the public for his children’s book “Charlotte’s Web.”

Edmund Ware Smith (1900–1967) was an avid outdoorsman, famous for his raucously funny, fictionalized accounts of his adventures in the North Woods. The two met when White wrote essays for The Ford Times, a publication of Ford Motor Co. edited by Smith.

When the letters were exchanged, White and his wife, Katharine, lived in Brooklin; Smith and his wife, Mary, had a place in Damariscotta.

The two men shared, besides their appreciation for each other’s wit and good writing, a love of Maine and the outdoors, especially songbirds; a passion for (as the book title suggests) raising chickens; and the habit of enjoying an adult beverage at the end of a busy day.

The letters addressed to “Whitey” (or sometimes “Andy,” White’s nickname) and “Smitty” abound with humor, incisive and insightful writing, details of their lives, good-natured ribbing, and much commentary, with some friendly rivalry about how to raise chickens. White, who had begun raising chickens as a child, was proud of his efficient chicken house and equipment, which he had designed and built. He offered detailed henhouse-building advice to Smith, a newcomer to the art, and also made some equipment for him. They exchanged chicken stories.

In one letter, White wrote, “The deluxe non-fouling non-frost-proof waterer that I built for you last fall from almost-clear pine still awaits delivery. … I will build you a Sensible Feeder and you can substitute it for the thing I presume you now have in there, from which the Wirthmore mash sifts steadily out onto the floor under the ceaseless billing of the birds.”

Smith responded, referring to the awaited Sensible Feeder, “(We) are now using one of those metal things — a trough — and the girls whip their mash all over hell. … The Flock consults the White Non-Self-Refilling Shell & Grit Feeder from time to time and they occasionally leave droppings in it which we carefully pluck out for our fertilizer pile, following our theory that one good turd deserves another.”

But it’s not all about chickens. They exchange views on travel, the business of writing, the use of Gulf Pride oil cans for sap buckets, health challenges, summer visitors, gardens, stuck zippers, favorite books, and much more.

The correspondence begins in 1956 and ends with Smith’s death in 1967. Smith had saved White’s letters, as well as copies of his own. When Smith’s wife, Mary, died in 1980, the correspondence was donated to Skidompha Library, with White’s permission. Not sure what to do with the letters, but aware of their importance, the library’s board tucked them into an archive-quality box and placed them in a vault at a local bank. Over time, the correspondence was forgotten.

Nearly 40 years later, in 2016, the bank asked the library to remove its several boxes of old files from the vault. At the library, a staff member discovered the letters and realized their significance. Library staff and volunteers transcribed and edited the letters, with guidance from Martha White, E. B. White’s granddaughter, who wrote an introduction for the book. Besides the correspondence, the book reprints four essays by the two writers, including “The Hen: An Appreciation” by White, and “The Outermost Henhouse” by Smith.

Down East Books was chosen to publish “Chickens, Gin, and a Maine Friendship.” Sales of the book benefit the Skidompha Public Library in Damariscotta.

“Chickens, Gin, and a Maine Friendship” is available at bookstores and online.

More about the authors

Elwyn Brooks White was an American writer and contributor to The New Yorker magazine. His books include “Essays of E.B. White,” “One Man’s Meat,” and “Here Is New York.” He was co-author of the language-usage and style guide “The Elements of Style.” In addition, he wrote the children’s books “Stuart Little,” “Charlotte’s Web,” and “The Trumpet of the Swan.” In a 2012 survey of School Library Journal readers, “Charlotte’s Web” was voted the top children’s novel.

Edmund Ware Smith wrote more than 600 short stories and essays, some published in Field & Stream and many gathered into a total of nine books about the Maine woods and its characters. Some of his books include “Upriver and Down,” “The One-Eyed Poacher,” “A Treasury of the Maine Woods,” “Rider in the Sun,” and more. He lived in Damariscotta.

Martha White, the granddaughter of E.B. White and manager of his literary estate, is a writer and editor who lives on the coast of Maine. A longtime contributing editor to Yankee Publishing and The Old Farmer’s Almanac, her work has been published in The New York Times, The Boston Globe, Christian Science Monitor, Early American Life, Country Journal, Down East, and numerous other national magazines and small presses. She edited “E.B. White on Democracy,” “E. B. White on Dogs,” “In the Words of E.B. White,” and a revised edition of “Letters of E.B. White.”