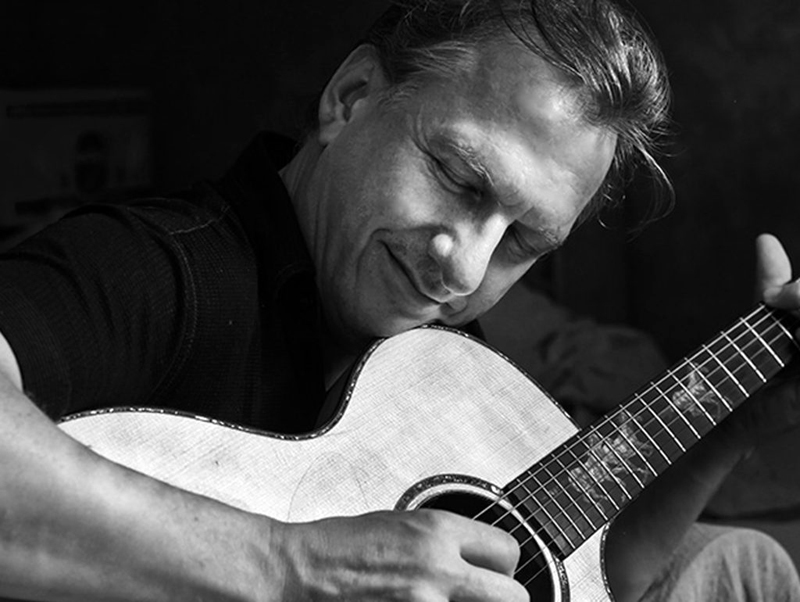 Though some may refer to Ellis Paul as a folksinger, he is more a singular storyteller, a musician whose words reach out from inside and yet also express the feelings, thoughts, and sensibilities that most people can relate to in one way or another, regardless of age or upbringing.

Paul spent part of his award-laden career living in the Boothbay region, and on Saturday, June 9 he returns to the Opera House at Boothbay Harbor for a solo performance for old friends and new acquaintances.

Paul has headlined stages near and far for more than a quarter century and has produced 19 albums and received numerous critical kudos.

While he now tours the globe, Paul’s geographical origins couldn’t have been farther from the world at large. He was born in the dead of winter in Fort Kent, Maine, a place nestled right up next to the Canadian border. Paul came from humble origins, a family of potato farmers who could count among their forebears a veteran of the Battle of Gettysburg, whose heroism on that field of honor earned him the 140 acres of Maine farmland that his descendants would continue to sow. It was the place that taught Paul the meaning of hard work and self-reliance, and the values that accompany as much drive and determination any individual could muster.

As a boy, Paul found his escape in athletics, working out as a runner and testing his mettle in the open spaces near his home. He became a star competitor, and enjoyed the advantage of traveling throughout the nation after being given opportunities to compete. Along the way, Paul saw more of the country than most people do in a lifetime.

“I was lucky to be able to travel for competitions all over the U.S. and to see places I once could only dream of,” he said. “The Olympic Stadium in Los Angeles, the endless plains of Texas, the Kansas prairie, the Rocky Mountains in Wyoming. Every trip was funded by a hat the town passed around on my behalf, and it never came back empty.”

When Paul finished second in a nationwide track competition, he was met at the airport by the high school marching band and a fire engine with spinning lights that drove him in triumph through town. In an expression of hometown pride, the mayor handed Paul the key to the city.

No one ever told Paul he had to follow in his family’s tradition. He was a dreamer after all, and he had seen enough of America to know there was more out there than his town could ever offer. Consequently, his ambitions were never destined to stay bottled up for long. Paul would write, paint, play trumpet, and sing in the school choir. “I never had anyone tell me I had to be a farmer,” Paul said. “I had plenty of people telling me how my hard work and talent could take me places. That’s enough to get you dreaming, and enough to make you believe those dreams are within reach.”

Paul has a sense of roots, of connectedness to the whole history of folk music; he sees the thread that runs through all the generations of this music.”

Paul became infatuated with the music of Woody Guthrie, drawn to Guthrie’s social consciousness and the humanitarian streak that ran through his work. His commitment to Guthrie’s legacy eventually led to his inclusion in a 10-day celebration of Guthrie’s work held at the Rock and Roll Hall of Fame in September 1996, an event that included such notables as Bruce Springsteen, Billy Bragg, the Indigo Girls, and Ani DiFranco, and which was presided over by Guthrie’s daughter, Nora. Later, when Guthrie’s hometown of Okemah, Okla. hosted the first Woody Guthrie Folk Festival in July 1998, Paul was tapped as one of the headliners.

Paul has become a staple at the Newport Folk Festival, and played Carnegie Hall and venues from Alaska to Miami, Paris, and London. In addition to his 19 albums, Paul’s music has appeared on dozens of distinguished compilations. He has also released a pair of children’s albums, earning him honors from the Parent’s Choice Foundation for both.

Special discounted tickets for Paul’s June 9 concert are currently on sale through the opera house box office at 86 Townsend Ave., Boothbay Harbor, or by calling 633-5159. Advance discounted tickets are $20. Doors for seating open at 7 p.m., Paul goes on stage at 7:30 p.m. Tickets and information for all opera house concerts and events are also available online at boothbayoperahouse.com.