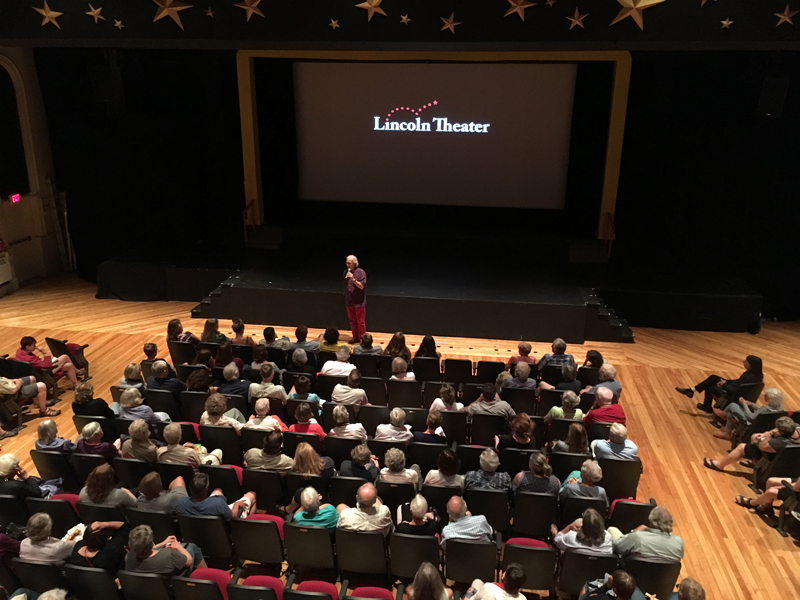 On Friday, July 27, I had the opportunity to be a part of history. I went to Lincoln Theater in Damariscotta to enjoy a documentary on the life of Mr. Fred Rogers, and apparently I was one of many around the world, as the film, “Won’t You Be My Neighbor?,” has grossed more than any other documentary film ever, anywhere. According to “The Hollywood Reporter,”  it is about to pass (or may have passed by the time this goes to press) the 20 million-dollar mark. However, this was not the only part of history I got to be a part of while I was there.

On hand for opening evening was Eliot Daley, a colleague and friend of Rogers. Not only was Daley donating his own time for this event, he was also utilizing the evening as a fundraiser for Hearty Roots. Hearty Roots, a program run by the enthusiastic and welcoming Haley Bezon, is a program for young people designed to help build self-esteem through outdoor adventures.

I was fortunate enough to sit down with Daley for a few minutes, and realized right away why Rogers considered him a friend. Daley’s kindness and calm demeanor were exactly the sort of qualities I saw on “Mister Rogers’ Neighborhood” every afternoon while I was growing up. Daley spoke passionately about his friend and about the show in general.

Not only is Daley humble and kind, he’s a resident of Lincoln County for at least part of the year. Daley calls Waldoboro home in the summer and during the major late-year holidays. In the few pleasant minutes I had with him, Daley let me into the world behind “Mister Rogers’ Neighborhood.” He told me that the show’s production staff made no attempt to reach anyone other than preschoolers, and they were lucky enough to have the one of the world’s leading child development experts, Margaret McFarland, on hand for reference.

When I asked him whether or not the show was “scripted” – a term I used reluctantly, as the show always had a sort of natural feel to it — Daley empathically stated that entire 28 minutes and 38 seconds was in fact scripted as an “illustrated telephone conversation between Fred and the child” so that the child felt he or she had a personal connection with Mr. Rogers.

Judging by the reaction of the 174 other people in the theater, I would say Rogers reached his audience. Although there were some younger attendees, the majority of the audience was over 30. Never have I sat in a theater and heard absolutely no sound except when appropriate. We laughed when it was funny, we tutted when we felt he’d been wronged, we were preternaturally still when something sad was occurring on screen. I heard more than one sniff and saw more than one tear — and shed a few tears myself.

Today’s world has a proliferation of sadness, cruelty, and violence. Daley believes (and I suspect many others would agree) that the resurgence of Rogers’ popularity is due to the need for kindness and the need to be accepted just the way we are, without the need for retweets and “likes” to affirm our identities.

It seems only right, then, that the fundraising efforts of Daley should be geared toward a program designed to help “tweenagers,” as Bezon described them, find themselves, make new friends, and achieve personal growth along the way. In an email from Bezon, she told me that the evening had raised $227 from concessions and $382 in donations. Aside from the monetary donations, the awareness raised on this evening will have far-reaching benefits. Those wishing to learn more about Hearty Roots can go to heartyroots.org.

The power of Fred Rogers in today’s world to bring us together for a common good, or just to feel good about ourselves, sends an enduring message that cannot be dampened by time, or even the passing of Rogers: we need to believe in ourselves and remember to ask others to be our neighbors.

(Sarah Caton writes the “Paws for Thought” in The Lincoln County News.)