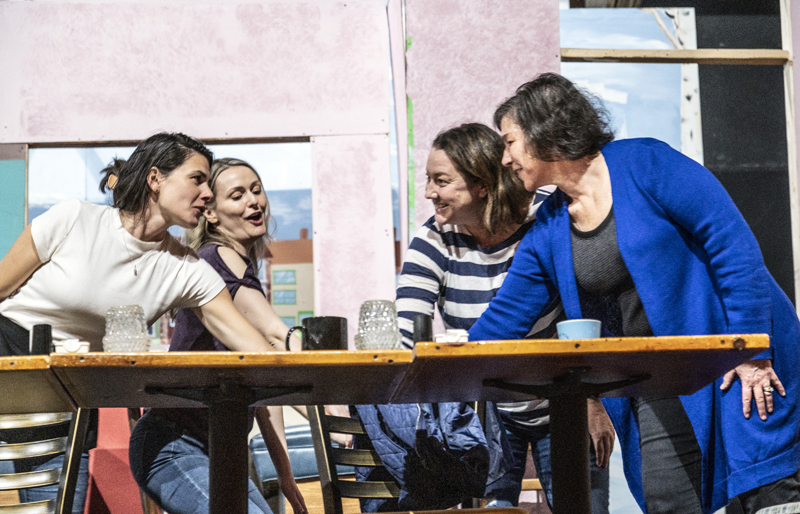 From left: Mallory Adams, as Janine; Nanette Fraser, as Rita; Jennifer True, as Mary Ellen; and Carole Florman, as Vi; are all in on friendship during a dress rehearsal for Halfway There at Lincoln Theater in Damariscotta on Tuesday, Nov. 8. (Bisi Cameron Yee photo)

Before rehearsals began, director John Mulcahy knew the characters inhabiting the play “Halfway There” better than any of the actors. By opening night he said the actors will know them better than he ever could.

All five cast members of the Lincoln County Community Theater production have spent almost two months inventing the backstories and plumbing the emotional depths of four tight-knit friends and the handsome doctor who disrupts their comfortable small-town routine.

Casting the play was a challenge, something Mulcahy said is not unusual in Midcoast Maine. While the talent pool in Lincoln County is rich, it’s not large. Finding the right actor who can commit to both the role and the rehearsal schedule can be difficult.

Mulcahy held a general call for auditions before he even had a play to perform. He held table reads for a number of plays until he came across Norm Foster’s light-hearted 2016 comedy. Foster, who is not widely known in the states, is a prolific playwright with more than 60 plays to his name. Mulcahy called him “the Neil Simon of Canada.”

“We’re in a time of great division,” Mulcahy said. For him “Halfway There” is a play that reminds the audience of the value of lifelong friends and the possibilities inherent in welcoming someone new.

“You get invested in the journey,” Mulcahy said. “It starts off as a sort of sitcom but the layers peel away and it’s more than expected.”

Rehearsals started in late September. Cast members met three times weekly to learn the script and build their chemistry. Their first rehearsal in the theater wasn’t until November.

Mallory Adams, who plays Janine, may not have any formal theatrical training, but she has a long history with theater, starting with community Christmas productions as a young child in Pennsylvania and continuing through high school.

“I’ve loved it from an early age and hope to do it forever if I’m able,” she said.

After being a stay-at-home mom while her daughter was young and moving to Maine, she wanted to do something for herself; she wanted to meet people. So she auditioned for a role in the Lincoln County Community Theater production of “Harvey.”

“I’m so thankful I went to that audition. I’ve made incredible friends, incredible connections,” she said.

Since then she’s continued to act at Lincoln Theater, The Waldo Theatre, and with River Company. She’s served on Lincoln Theater’s board, including three years as president, “just from going to that one audition and doing that first play,” Adams said.

“I really like Janine,” she said. “I think she’s a very likable, admirable character.”

Adams wrote lists of key words as she developed the role, including capable, kind, observant, and hardworking.

“I felt like she’s a real salt of the earth person,” Adams said. “She knows what she thinks.”

Adams said the biggest development for Janine in the play is a moment of indecisiveness. It all kind of takes her by surprise, Adams said, but her friends help her take the leap of faith that will change her life.

Nanette Hennig Fraser is from the Chicagoland area and earned a bachelor’s degree in fine arts from the University of Illinois Urbana-Champaign. She has acted professionally in both Chicago and Los Angeles and she owns her own digital marketing company, which allows her the flexibility to pursue acting both professionally and in community theater.

Fraser plays Rita, a character she describes as “a little more outgoing than I am, more aggressive than I am.”

“I wasn’t sure I liked her,” she said. “But she’s actually really layered and her journey is written really well in the script.”

Fraser said she worked a lot with Mulcahy on Rita’s movement and how she presents herself physically.

Fraser loves the process of rehearsals, perhaps even more than performing. For her it’s the challenge of exploring someone else’s mind.

“You don’t always agree with their thought process and that’s hard,” she said. “You don’t always love the characters you play. You really search to find them, to put that aside, your own personal judgments.”

Fraser thinks the playwright did justice to Rita’s journey, particularly during a powerful monologue in the second act.

“Even in front of her best friends it’s hard for her to express who she really is. She’s really protecting herself,” Fraser said.

Jennifer True has been a part of Lincoln County Community Theater for over a decade. She minored in theater in college, and community theater has allowed her to keep acting in her life. She typically performs in the theater’s fall play and stage manages the spring musical.

“I can carry a tune but not very far,” she said.

She described her character Mary Ellen as mousy and a little shy, and said she found the role challenging to play because the character’s approach to life is very different from her own.

“She’s a housewife. She goes home and makes dinner for the family. That’s not me,” True said.

Still, True calls Mary Ellen “very loving, a loyal friend … the peacekeeper of the group,” and describes the play overall as light and fun.

“I think it’s perfect for us,” she said of the female-centric play. “It fits the age group (of the actors) and their strengths.”

True also thinks audience members will recognize themselves within the characters, adding to the humor.

We’ve been laughing every rehearsal,” she said.

Carole Florman is new to Lincoln Theater though she has a strong theater background. After college she honed her skills at the American Academy of Dramatic Arts before heading to New York City to try her hand as a stage actress. She lasted six months.

Instead, Florman pursued a career in public policy and has only recently returned to the theater.

Florman spent some time building the backstory of her character, Vi.

“I have concluded she went away to college … came back and really made a conscious choice that this is the life that she wanted,” she said.

Florman then worked on her character with Mulcahy during rehearsals and via email. She said the director would sometimes send her two-word questions regarding a line that would spark her thinking and the two would go back and forth sharing thoughts on Vi’s development.

Florman said she loves the relationships between the women as characters and as actors.

“I think that (we) have a terrific rapport and respect for each other both as performers and as people and it’s been a tremendous amount of fun to … develop the relationships amongst the four of us on stage,” Florman said.

Soren Barker has also been acting from an early age and is an alumnus of Boothbay’s Y-Arts program, which offers theatrical and musical opportunities to young people in conjunction with the Boothbay Region YMCA. He’s been involved in local theater ever since, most recently performing in River Company’s “The Complete Works of Shakespeare (abridged),” which extended to performances at The Waldo and on the stage of Lincoln Theater.

“The key to any character building is finding things you can relate to and empathize with so you can make them real,” Barker said, adding he found that to be an easy journey with Sean. “He’s funny and quirky and has a love of life and I can say I get that.”

Barker, who is not originally from Maine, also found some common ground around being an outsider in a small community.

Sean, a doctor filling in temporarily at a small clinic, is thrown into “a whirlwind of a place,” according to Barker.

“When he gets there this community of people greet him, welcome him, and reveal all their deepest darkest secrets – a little more than he bargained for,” Barker said.

Barker described Sean as “buried under a mudslide of hurt” in his old life. He didn’t have that sense of community and “he’s kind of swept away by it and falls in love with the connection of friends … It’s a little overwhelming at first and then as he warms up to it he realizes that this is what’s been missing in his life.”

That concept rang true to Barker, who considers that sense of belonging one of the beauties of small town rural living.

“Halfway there” was originally set in Nova Scotia, but Mulcahy wrote Foster and asked if he could shift the action to another small town. Foster readily agreed and the Lincoln Theater version of the play is set in nearby Rangeley.

Barker thinks the move will make the play resonate even more with Lincoln Theater audiences. “We don’t have geographic context for Canada,” he said.

Fraser called the change “the icing on the cake” that makes the play even more humorous and relatable to a Maine audience.

While “Halfway There” has its emotional moments, ultimately it’s about entertainment.

“When you’re faced with so much drama and trauma, this cloud of anxiety that we’ve all been under, it’s good to have a little laugh, a little tear-up,” Mulcahy said. “Hopefully we can lose ourselves for two hours.”

“Halfway There” will play at Lincoln Theater Nov. 17-19 and Nov 25-26. For more information or to purchase tickets, go to lincolntheater.net.