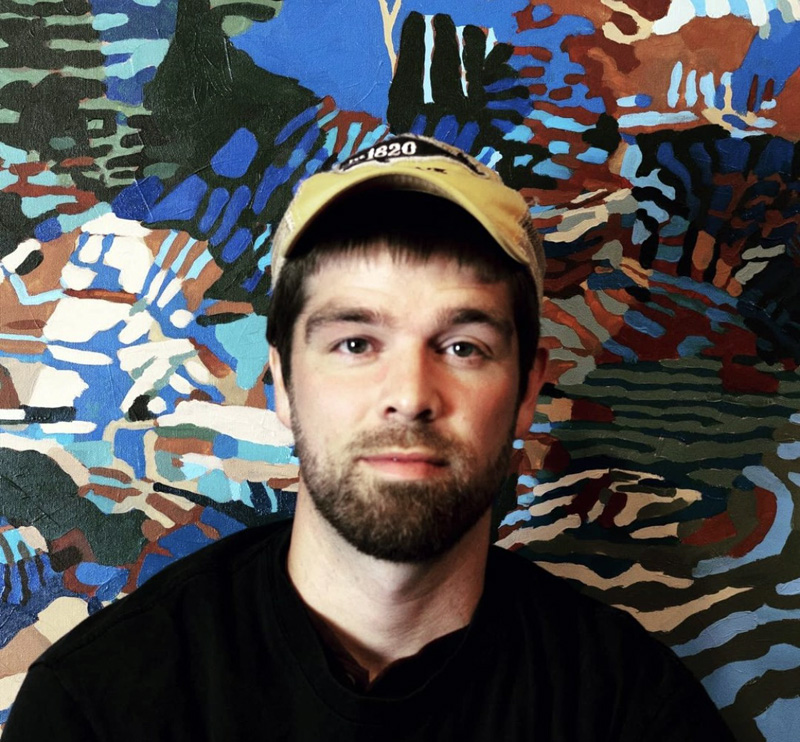 Alna artist Graham Walton stands in front of a painting at the Salt Pond Studio in Friendship in May 2021. Walton works mostly with acrylic paint to create vivid and vibrantly-colored paintings of Maine’s landscape with his own unique twist. (Photo courtesy Graham Walton)

After a lifetime of painting and playing music, Alna artist Graham Walton is now following his passions and working at making a living by doing both.

Music and art have always been a big part of Walton’s life.

“From a very young age, my mom realized that if she gave me markers or crayons, I was like boom, in the zone,” Walton said during an interview on Friday, Jan. 6.

However, he didn’t decide to really go for it as a career until 2016, when he was commissioned by longtime friend and owner of the Shuck Station, Brendan Parsons, to design the logo for the restaurant that opened in Newcastle the following summer.

Prior to this, Walton had been taking a long break from art and music, working at Exact Dispensing Systems in Newcastle as a machinist and welder.

Walton said the iconic oyster shell in the shape of the state of Maine was Parsons’ idea and he commissioned Walton to create it.

“It got a lot of attention and feedback,” Walton said. “It was fun and exciting.”

He then started working on graphic design projects, creating the “sandwich man” logo for S. Fernald’s Country Store and Round Pond Lobster Co.’s logo before hanging that venture up to focus on painting and music.

The Gainers are on a little bit of a break, but plan to record an extended play album this winter, Walton said. The band already has an album, “Live at Schooner Landing,” and an EP available on Spotify.

Walton grew up in Newcastle, living at the Riverside Boatyard with his stepdad, owner Paul Bryant.

At Great Salt Bay Community School, Walton said he learned a lot from art teacher Karen Hight, who recently was among the 10 inaugural winners of the Prang Art Teacher of the Year Award.

“She was very nurturing and supportive. She kept it fun while teaching you things,” Walton said.

Walton followed his passion for painting at the University of Massachusetts Amherst.

He said his brain “was exploding with all these new ideas” and he was “so inspired” at the school, but after two and a half years, he was ready to move back to Maine.

The summer Walton came back home, he studied with Keith Rendall, who is a printmaker in Wiscasset.

“I learned a lot from him,” Walton said.

He learned how to make wood-cut prints, which inspired his current painting style that has its roots in the line-based and pattern-focused style of wood-cuts.

He attended the Maine College of Art & Design in Portland, but the art classes really didn’t jive with him like they did at Amherst.

Walton then decided to attend Southern Maine Community College for the welding program, so he could get a job making decent money. He then took a long break from art and music, just focusing on being a career man at Exact Dispensing Systems until leaving in fall 2020 to shift to his art career. 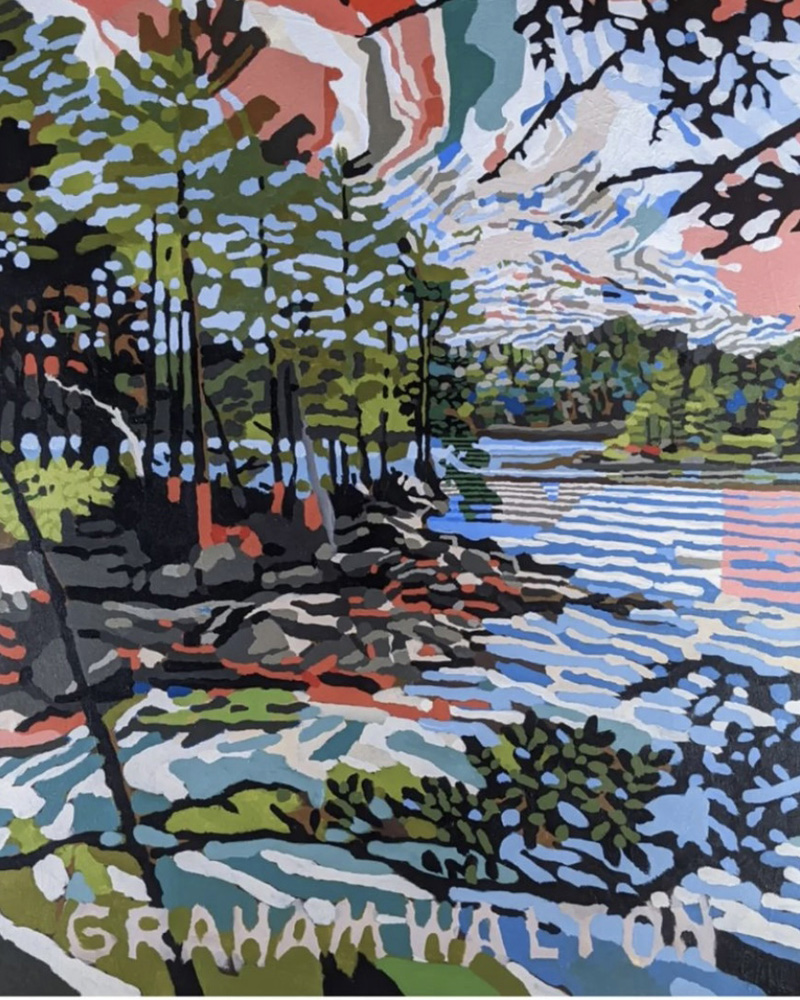 An acrylic on canvas painting, “Plummer Point Reconnoissance,” by Alna artist Graham Walton is listed for sale on his Instagram page, @grahamwalton.art. Walton has shown his work at the Salt Pond Studio in Friendship for the past three summers. (Photo courtesy Graham Walton)

After taking a step back from his graphic design business in 2019, Walton committed himself to relearn painting and “after many frustrating nights” he was able to develop his current style using acrylic paints.

“I had a vision of how I wanted a style of a painting to look and I wasn’t quite sure how to do that,” Walton said.

Walton said 90% of his paintings are of Maine landscapes, which he puts his own unique twist on.

“Now what I’m really working on and inspired by is more modernism,” Walton said. “Using the landscape as a template to create a type of pattern and composition that has a certain feeling to it, a certain vibe.”

According to his artist statement, in Maine, Walton is “surrounded by powerful landscapes that are too rich and alive for me to capture with traditional realism.”

“I worship the Maine landscape,” Walton said. “I feel like it’s futile for me to try to accurately reproduce how magical it is.”

“I simplify my compositions and reduce them to evenly spaced patterns to convey my belief that everything is interwoven and homogeneous,” the statement reads. “I strive to communicate the energy and unity that I sense living in the ancestral Abenaki land of Midcoast Maine.”

Walton’s first art show was in July 2020 at the Salt Pond Studio in Friendship, owned by Pam Cabanas. When the two first met, Cabanas needed some carpentry help in fixing up her studio and the two came to an agreement for Walton to show his work.

“The studio was new and Pam really and faith in me. She was looking out for me,” Walton said.

The next summer, in 2021, Walton hosted a show, the theme of which was a portrait of a person inside a house with a landscape painting behind them.

“I like the idea of a painting of a painting,” Walton said. “It’s showing you how dope your life is when you have a landscape painting in your house.”

Walton has also been playing guitar since he was in sixth grade, but didn’t really begin to focus on singing and songwriting until about seven years ago, when he had a place to himself in Nobleboro and he could “sing really loud and not be embarrassed.”

After forcing himself to get up and play and sing some cover songs on acoustic guitar at open mic night at Schooner Landing in Damariscotta, Walton put together a band, The Gainers.

Before the band was formed, the first song, “Coastal Route,” came to him while driving home one day.

“I was like, ‘I need to start a band with this vibe,’” Walton said.

He said the original songs were inspired by his love of Creedence Clearwater Revival and his desire to create a type of Maine roots music in that vein.

Walton’s goal is to continue playing music and to have at least one art show in the summer each year, while spending winters mostly painting. Some of his work is currently featured at Salt + Pepper Social in Newcastle.