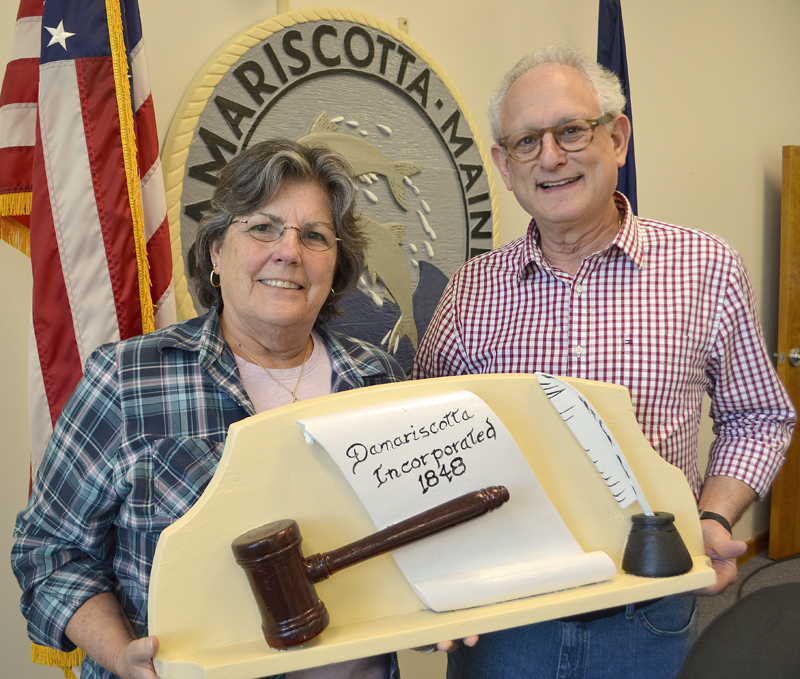 Damariscotta Board of Selectmen Chair Robin Mayer and Vice Chair Ronn Orenstein hold a 1959 wood carving by the late Damariscotta artist Maurice “Jake” Day. The carving, along with the town seal behind Mayer and Orenstein, were both carved by Jake Day in 1959 and restored by his grandson Dan Day. (Maia Zewert photo)

Day’s grandson, Dan Day, of Damariscotta, restored the carving, which depicts a gavel, a quill pen in a bottle of ink, and a white scroll that includes the town’s name and year of incorporation, 1848.

Both carvings, along with a third depicting symbols of the fire service, used to hang outside the old Damariscotta town office and fire and police station at 27 Church St., now home to Cherry Gallery.

The carvings were exposed to the elements and the seal eventually broke into four pieces. Dan Day’s father, the late Dr. McClure Day, attempted to restore the seal in the mid-1990s, but again, the seal suffered damage as a result of exposure.

Dan Day restored the seal in 2014. Since then, it has hung on the wall at the front of the meeting room.

The carving of the fire service is on display at the Damariscotta Fire Department. The other carving had been stored in the Damariscotta Historical Society room in the town office until recently, when Lutkus asked Dan Day if he would be willing to restore it.

Day recently completed the restoration and delivered the carving to the town office, Lutkus said.

“Dan restored both pieces out of love for his grandfather and a deep respect for Damariscotta, where he and many generations of Days were born and raised,” Sandi Day said in her email. “We are pleased that both pieces of Damariscotta history will be displayed inside, hopefully extending the longevity of both.”

Maurice “Jake” Day, an animator, cartoonist, illustrator, painter, photographer, and wood carver, was known for his work on “Bambi,” as well as his dioramas and watercolors of animals of the Maine woods dancing and singing, playing sports, and otherwise engaging in human pursuits.