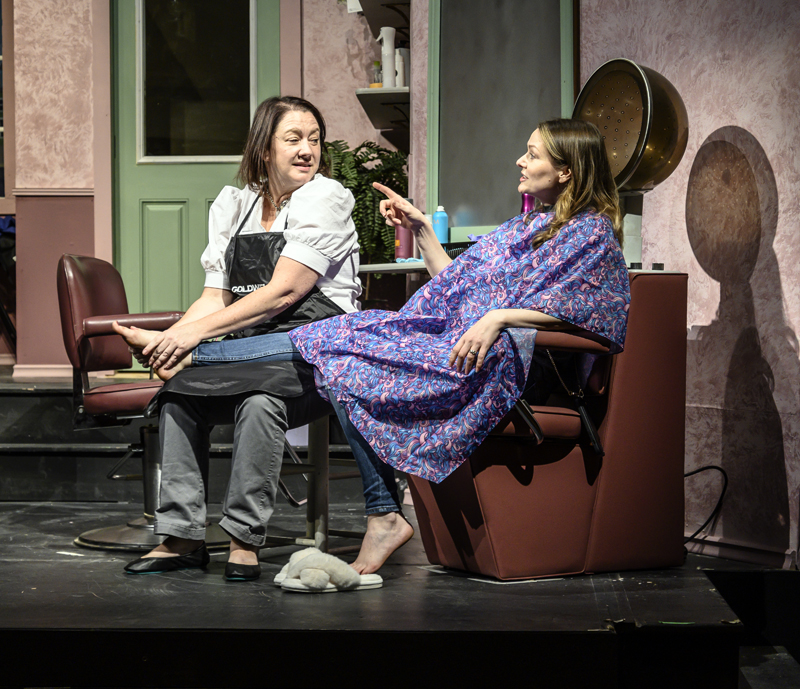 Jennifer True as Tina Harvey rubs the foot of her celebrity client Toryn Bennoch played by Nanette Fraser during a rehearsal for Hair Frenzy at the Lincoln Theater in Damariscotta on Nov. 8. (Bisi Cameron Yee photo)

The decision to stay home or join the ranks of those “from away,” especially in Maine, is a difficult one, and it is a dilemma explored with a great deal of humor in Lincoln County Community Theater’s newest production of “Hair Frenzy,” premiering Friday, Nov. 12.

Written by Maine playwright Travis G. Baker, “Hair Frenzy” is a comedy that explores the meaning of “home” in a fictional salon in a Maine town.

The story centers on Tina, a single mother and business owner, who struggles with the frustrations of daily life as she balances her various roles.

When her childhood best friend, who left Maine for success in Hollywood, returns to town asking for Tina’s help following an accident, Tina is faced with a life-changing decision.

“The play is really about home, and what that means, and what it means to go away and to come back to the people that stay and never go away,” Director John Mulcahy said at a dress rehearsal on Nov. 8.

Mulcahy, LCCT’s production supervisor since 2009, has been a conductor and director on and off Broadway. He was resident music director at Maine State Music Theater for five seasons in the 1980s. Stepping away from that professional background, Mulcahy found a new passion for theater and music working with LCCT.

“When you’re not doing it for a living, you can pick and choose what you want to do, which is freeing, and we’re very lucky to have very talented people, so this does feel like a luxury to me,” he said.

The production features an eight-person ensemble cast, including Jennifer True, Nanette Fraser, Christina Belknap, Tom Handel, Nina Tilander, River Carlyle, Stephen Wallace and Emerson Harris. Cast members range in experience with the company from one show under their belt to nearly a decade of experience performing in the Lincoln Theater.

Nanette Fraser plays Toryn, the Maine native who makes a name for herself as an actress in Hollywood. Fraser herself pursued a BFA in acting from the University of Illinois and worked in Los Angeles for a time, so she has some reference for fleshing out her character.

“She’s a very large character, which is fun to play, but I like finding, with a large character like that, where they really are deep inside… so that she doesn’t just seem like just your stereotypical movie star,” she said.

Fraser works full-time as a digital marketing consultant and raises two children. She described working with LCCT and other local theater companies as a creative, if not labor intensive, outlet.

Jennifer True plays Tina, the owner of the eponymous “Hair Frenzy” salon in the fictional town of Clara, Maine. In her own life, True is a teacher at Oceanside High School and has been performing with LCCT for 10 years.

True said that one of the challenges she has had to work through with this production is finding the places of commonality between herself and Tina that she can latch onto in her performance.

“One of my favorite things about acting is that little pieces of yourself show up in a character, and you can bring your personality, your life, to the character,” she said.

True said that trusting Mulcahy and his direction has been integral to figuring out how to play Tina. Doing so will be all the more important as she will have some particularly discerning audience members for this production; namely, her students, a number of whom have already said that they will be coming to see the show.

“I like sharing my life with my kids and to have them see that this is something in my life; I go to their basketball games, you know,” she said.

LCCT’s production of “Hair Frenzy” will mark the first time that the play has been performed since it was staged by the Penobscot Theater Company in Bangor. It also marks the first time in years that LCCT will put on a fully staged production.

Many of LCCT’s performers have families and full-time jobs, and developing a character while memorizing lines and blocking can often be too much of a challenge. As such, most of the company’s past shows featured sets that move around the performers while they themselves remain rooted in place and on-book.

However, this time the company decided to take a risk and go for a full-on production, rehearsing for about seven weeks, two or three days a week, depending on the commitments of cast members.

“It does make a difference when they’re off-book and their whole body can participate in the play,” Mulcahy said.

Rehearsing in the Lincoln Theater was a challenge for the company, as their one-to-three man stage crew had to set up the stage for rehearsals and quickly take it down in preparation for movie screenings and other events at the theater.

Performers also have to make adjustments between smaller rehearsal spaces and the Lincoln’s considerably larger interior, as they relearn how to perform to the far reaches of the house.

“You still have to be honest to the character, but you’ve got to project, not just physically, but the whole character has to project to the back row,” Mulcahy said.

“Hair Frenzy” will run for two weekends, opening Friday, Nov. 12, and running through Saturday, Nov. 20. Tickets are $15 for adults, $13 for Lincoln Theater members, and $5 for youth ages 18 and under, available in advance or at the door beginning 30 minutes before show time.

Following the matinee performance on Sunday, Nov. 14, Baker will be in attendance for a special talk-back for audience members who wish to stick around and engage with the playwright in some “dramaturgical inquiry,” as Mulcahy called it.

Baker is known for his theatrical success with the 2014 play “One Blue Tarp,” and the upcoming “Hockey Mom” at Penobscot Theater Company, according to a news release. Born in Boston, Baker moved to Houston at age 5, later attending the University of Houston where he worked with actor Jim Parsons (“The Big Bang Theory”), and studied under playwright Edward Albee.

In 1994, Baker relocated to New York City, where he had the opportunity to work with playwrights Arthur Miller, John Guare, Sam Sheppard, Adrienne Kennedy, María Irene Fornés, and Horton Foote who Baker credits for having taught him a lot about place and community, leading Baker to eventually find his fictional town of Clara, Maine.

The characters in his plays are inspired directly from those he interacts with in real life. “I draw much of the details of the characters from those closest to me,” he said, in a news release.

“Hair Frenzy” takes place in the Hair Frenzy salon inspired by an actual salon in Old Town that went out of business a number of years before Baker wrote the play.

When asked about what inspired the writing of “Hair Frenzy,” Baker said, “I wanted to explore how the town worked and who worked in the town. What are the small business struggles and rewards?”

Ultimately, according to Baker, “’Hair Frenzy’ is about big dreams, small towns, and bad hair. Sometimes we don’t perceive our own value to a community, a family, ourselves. Conversely, sometimes, as a community, we don’t value, as much as we should, those people and places that truly make a town viable.”

For more information, go to lincolntheater.net.