A huge hit when it premiered at Maine International Film Festival last July, “Lives Well Lived”is a documentary by Sky Bergman that celebrates the incredible wit, wisdom, and experiences of adults age 75 to 100 years old. Through their intimate memories and inspiring personal histories encompassing over 3,000 years of experience, 40 people reveal their secrets and insights into living a meaningful life. Sharing family histories, personal triumph and tragedies, loves, and losses, these men and women prove that aging is something to cherish, retirement doesn’t mean you retire from life, and growing old doesn’t mean growing silent. Their stories will make you laugh, perhaps cry, but mostly will inspire.

The film won Best of Festival at the 2017 Nevada City Film Festival.

“A fine way to both celebrate the seasoned among us as well as the human spirit that continues to goad us on even in the darkest of times,” said Eric Altoff, of the Washington Times. Peter Rainer, of NPR, called it “a lovely film.” 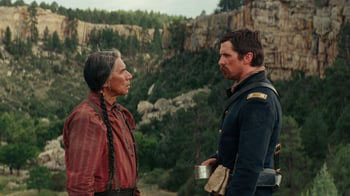 From left: Wes Studi and Christian Bale in “Hostiles.”

In 1892, legendary U.S. Army Capt. Joseph Blocker (played by Christian Bale) reluctantly agrees to escort a dying Cheyenne war chief and his family back to their tribal land. Embarking on a harrowing and perilous journey from Fort Berringer, N.M., to the grasslands of Montana, they soon encounter a young widow (Rosamund Pike) whose family was killed on the plains. The travelers must now band together to survive a punishing landscape that’s crawling with hostile Comanches and vicious outliers.

For more information, go to boothbaycinema.org or facebook.com/harbortheatre, or call 633-0438. Harbor Theater is a nonprofit cinema located at 185 Townsend Ave., at the junction of Routes 27 and 96, in Boothbay Harbor, across from Hannaford Supermarket.