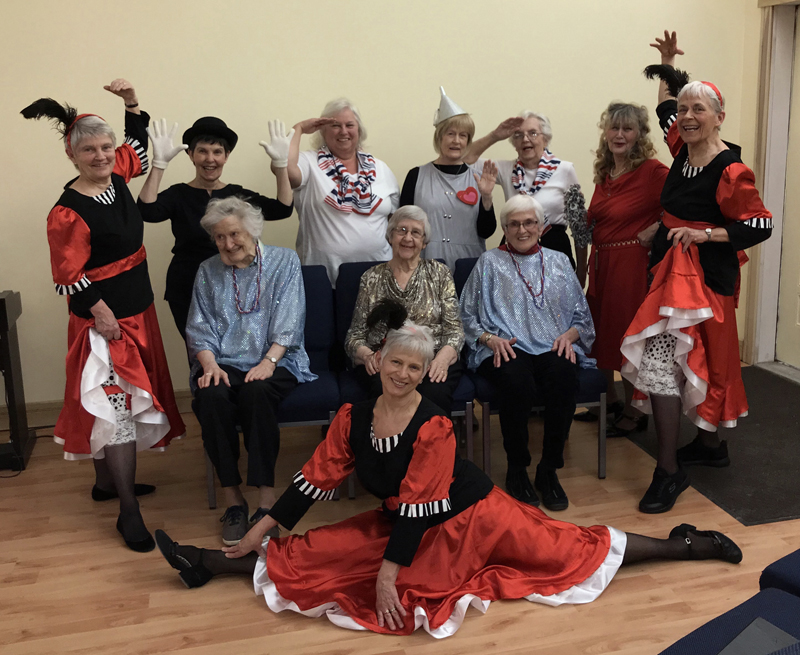 Hearts Ever Young members prepare to dance their way on stage for their special 10th anniversary production of “A Decade of Razzle-Dazzle.” (Photo courtesy Susan Day)

Besides the full chorus under the music direction of Sean Fleming, annual Hearts Ever Young performances include a variety of dance. This unique troupe of local members of the community has adopted the philosophy that age doesn’t matter and proves it every year, especially when it comes to dancing.

In celebration of the 10th year of entertaining, Hearts Ever Young will perform both new and favorite routines from previous years by its most senior members, including the snazzy tap dance to “Steam Heat” and the specialty jazz number “A Couple of Swells.”

Not to be missed is the patriotic jazz-tap marching dance in tribute to the United States and armed forces veterans.

Another new clog-tap routine and the fast-paced can-can (yes — Hearts Ever Young can can-can!) are sure to have audiences dancing in their seats.

The Hearts Ever Young dancers will kick up their heels in “A Decade of Razzle Dazzle” at Lincoln Theater, 2 Theater St., Damariscotta for one matinee at 2 p.m., Monday, May 20 and two evenings at 6:30 p.m. Tuesday, May 21 and Tuesday, May 28. One should come early to claim a seat. A $10 suggested donation at the door will be gratefully accepted.