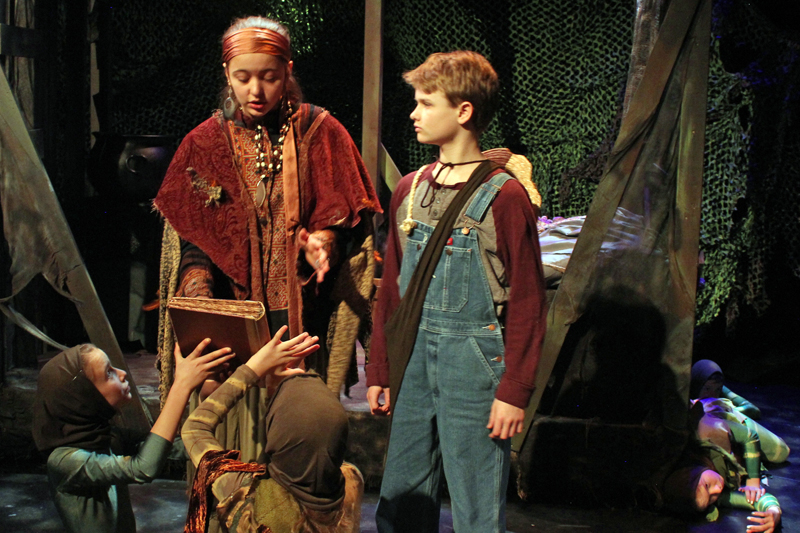 Iris Pope as Mammy and Andrew Lyndaker as Wiley in “Wiley and the Hairy Man.”

More than 30 third- through eighth-grade students from 10 Midcoast schools and home-schools, are spending their January afternoons rehearsing in the Parker B. Poe Theater at Lincoln Academy, in Heartwood Regional Theater Company’s fifth annual winter middle school production, “Wiley and the Hairy Man.”

For these young thespians, this is an intensive, rewarding and joyful time of shared learning and skill-building with friends they’ve made from other schools over the past several years, during this midwinter drama adventure. Some students act. Some play musical instruments. Some run the light board and sound cues. All are part of the teamwork and ensemble environment, led by Heartwood Artistic Director Griff Braley, and longtime assistant director for this program, Heidi Kopishke.

Due to the large number of students wanting to participate, this has become an auditioned program. Many students are returning for their third, fourth, or even fifth midwinter production at Heartwood — and they arrive prepared.

Written by Suzan Zeder, “Wiley and the Hairy Man” is adapted from a traditional African-American children’s story about a young boy who must overcome his fear of a tricky “hairy man” who lives in the dark shadows of the swamp.

Set deep in the mysterious Tombigbee Swamp, the spine-tingling tale unfolds, of a young boy, Wiley, facing his worst fear, the Hairy Man, who haunts Wiley’s days and dreams, with the help (or not) of his conjure-woman mother, Mammy, and his faithful dog, Dawg. In an exciting duel of wits, Wiley learns to rely upon his own resources and conquers two villains: the Hairy Man and his own fear.

This energetic, fun show is filled with foot-stomping music, rhythm, rhyme, and clever lines. With the help of the swamp creature chorus and the on-stage student band (think Louisiana Bayou music), the story evolves with constant movement and sound.

Three daytime performances will be filled with 450 students and teachers from seven Midcoast schools on Thursday and Friday, Feb. 1 and 2. “Bringing in student audiences during the school day is integral to the design of this program,” said Heartwood Executive Director Joy Braley. “Hundreds of students come into the Poe Theater at Lincoln Academy, where most of them will attend high school. They’ll support classmates who are on stage, pushing personal boundaries. They’ll share that special thrill that permeates the theater, when the lights go down and magic begins. They’ll learn a little bit of theater audience protocol. And maybe — you never know when it might happen — the dream to perform will be born in a young mind and heart.”

The work of these 36 students will culminate with three public performances on Feb. 2 at 7 p.m. and Feb. 3 at 2 and 7 p.m. Tickets are $5 for students and $10 for adults. Reservations are strongly suggested by contacting Heartwood: 563-1373 info@heartwoodtheater.org, or heartwoodtheater.org.

This program is made possible, in part, by Heartwood’s season sponsor, Bath Savings Institution, and its season youth sponsor, Damariscotta Hardware.