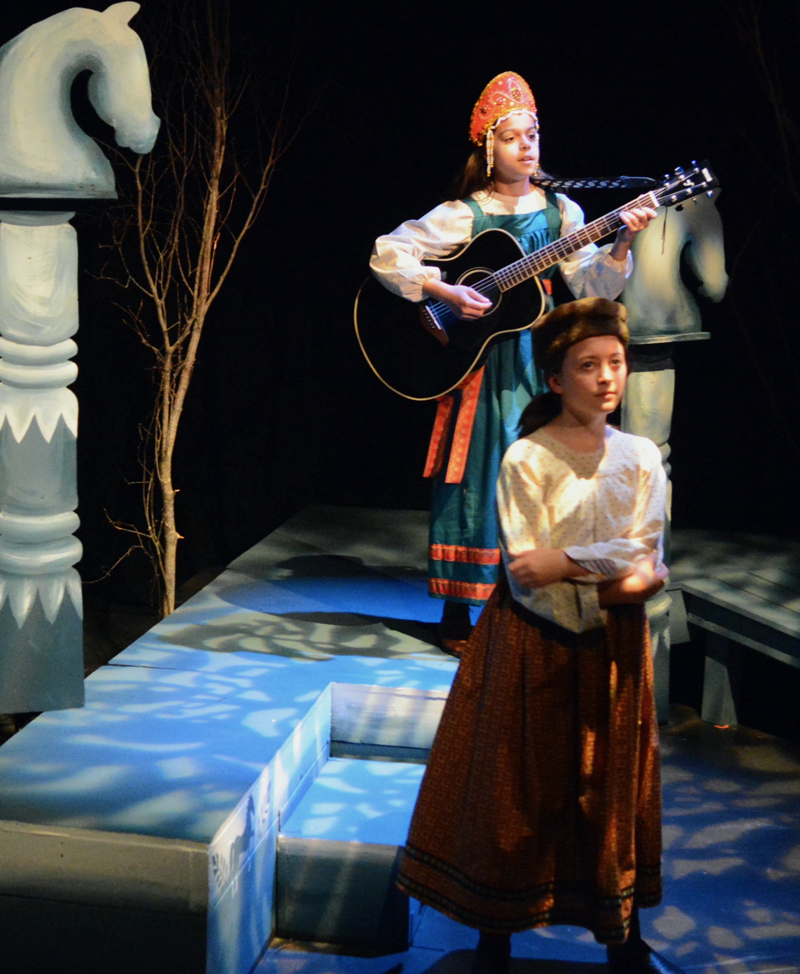 This great ensemble of hard-working and committed students auditioned and were cast into roles in early December. As the new year dawned, they returned and memorized for four weeks of high-energy, focused, and intensive rehearsals, culminating in three school-day peer performances to be seen by 450 Midcoast students and three open public performances.

“The Snow Maiden” is a very old tale with roots in Russian and Asian culture. Under other titles, such as “The Snow Child” and “Snegorka,” the basic story lives on in the story of “Frosty the Snowman” and provides a basis for opera and ballet versions and adolescent novels.

Nearly all students help narrate and have broadened their learning and skills to include dance and movement, puppetry, and song. Student technicians will be running light and sound under the mentorship of high school students who are a few steps beyond these youngsters.

This is the third original adaptation by Heartwood’s artistic director, Griff Braley, having produced two prior versions in 1993 and 2006. Braley is excited to be working with a fine artistic team, helping students to bring this magical piece to life.

Figures of Speech Theater Company’s Ian Bannon worked in residence for several days, first demonstrating and then helping build student-designed Bunraku puppets. These pieces come from an ancient Japanese tradition and are startling in their simplistic beauty.

Heidi Kopishke, a key player in this annual middle-school theatrical event, has delivered a fantastic array of costumes, built on research of the Russian period adaptations of the piece. Guy Scott, of Boothbay, provides original songs and tracks for several key moments in the show, setting the mood from the outset. Mary Boothby worked with Braley to design and create an intriguingly simple, yet elegant, set.

Braley, also directing Lincoln Academy’s competitive one-act piece (also being performed this winter), decided to try something new — simultaneously producing two slightly different original adaptations with both groups of students. The benefits of this overlap have been invaluable. While devising their own version of “The Snow Maiden,” numerous LA students have worked on the production side of the show to teach, create, support, and mentor the middle school students.

Three daytime performances will be filled with 450 students and teachers from seven Midcoast schools on Thursday, Jan. 31 and Friday, Feb. 1. “Bringing in student audiences during the school day is integral to this winter program,” said Heartwood’s executive director, Joy Braley. “Hundreds of students come into the Poe Theater at Lincoln Academy, where most of them will attend high school. They’re excited to support classmates involved in this show, but beyond this, they’ll share the special thrill that permeates the theater, when the lights go down and the magic begins. For many students, this will be their first time in a real theater. And each year, returning students can be heard excitedly exclaiming as they find their seats, ‘I remember last year when …’”

Three public performances are scheduled in the Parker B. Poe Theater at Lincoln Academy: Friday, Feb. 1 at 7 p.m. and Saturday, Feb. 2 at 3 and 7 p.m. Tickets are $5 for students and $10 for adults. Reservations are strongly suggested; contact Heartwood at 563-1373, info@heartwoodtheater.org, or heartwoodtheater.org.

This program is made possible, in part, by Heartwood’s season sponsors, Bath Savings Institution and Granite Hill Estates, and the season youth sponsor, Damariscotta Hardware.