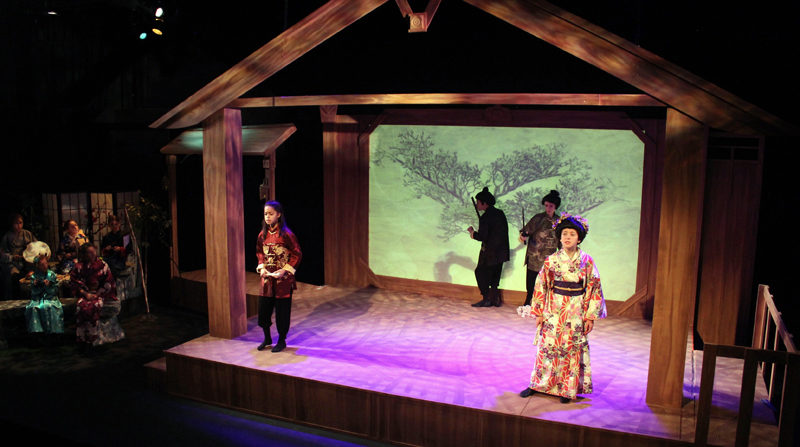 This weekend in the Parker B. Poe Theater, a month of rehearsals will culminate with three public performances as 25 students in grades three through eight, present their work in Heartwood Regional Theater Company’s seventh annual winter drama adventure. 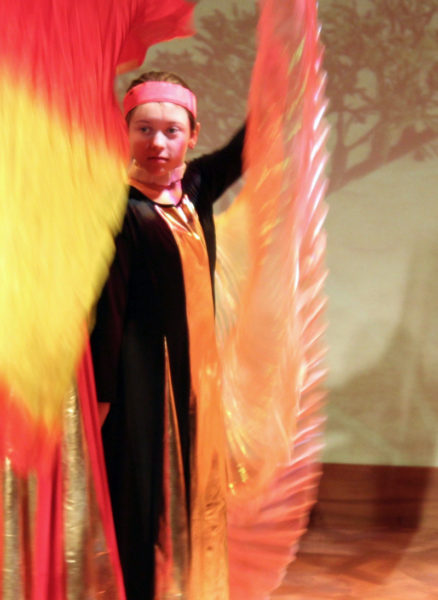 Three plays – “Firebird,” the longest, and two shorts, “Kantan” and “The Damask Drum” — will be performed, combining elements of Japanese theater styles: Kabuki, Kyogen, and Noh.

These styles make use of movement, masks, narrators to help tell the story, musicians who play throughout, and lots of very colorful costumes, wigs, and hand props. Plays of this style and period were written in poetic form, much of which has been kept for this production.

The Noh theater was built almost entirely of fine wood, including a raised platform, a roof, and a long walkway for actors to enter the stage. These traditions have been preserved in this production, and the Parker B. Poe Theater stage has been designed for this purpose, in a unique way.

These young actors have learned a great deal throughout this process. The same “tools” are required to present any style of theater: voice, movement, interpretation, music, etc., but presenting in this very different style has ushered students into an alternate space, beyond their daily norms, where they can more easily focus on the material and presentation.

“Firebird” tells the story of an empress with three sons who are vying for the kingdom. A magical firebird is the key to restoring honor and balance to the kingdom.

In “Kantan,” a young man goes in search of greatness, sleeps on a magic pillow, and sees his whole future in a dream.

“The Damask Drum” tells of a lovely young princess who teases her old gardener, who has been secretly in love with her for many years. She challenges him to sound a drum in a tree by the pond, knowing it will not sound. After running away in grief, the gardener returns years later to prove his devotion and win her heart. 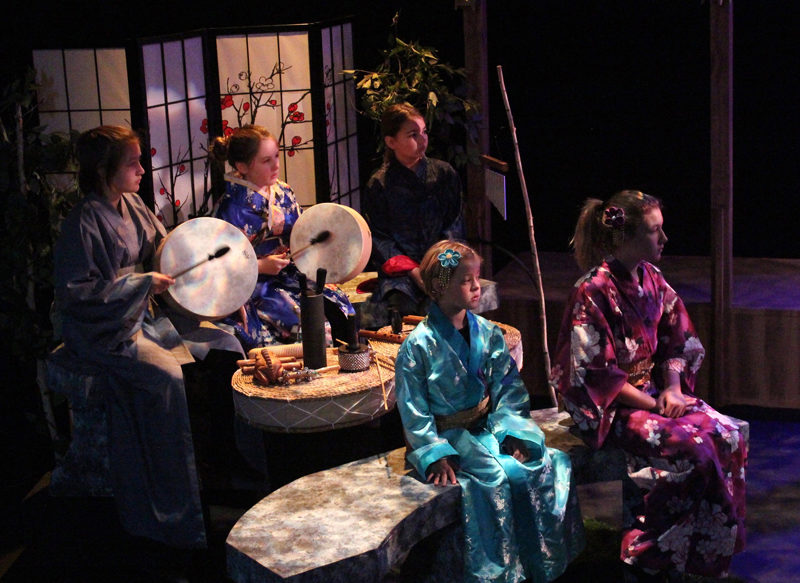 Actors will also enjoy performing for their peers, as students from several Midcoast schools attend three daytime performances in the Parker B. Poe Theater, this week.

Three public performances are scheduled in the Parker B. Poe Theater at Lincoln Academy in Newcastle: Friday, Jan. 31 at 7 p.m. and Saturday, Feb. 1 at 2 and 7 p.m. Tickets are $5 for students and $10 for adults. Reservations are available by contacting Heartwood: 563-1373, info@heartwoodtheater.org, heartwoodtheater.org.

This program is made possible in part by Heartwood’s season sponsors, Bath Savings Institution and Granite Hall Estates, and its season youth sponsors, H.M. Payson and Damariscotta Hardware.