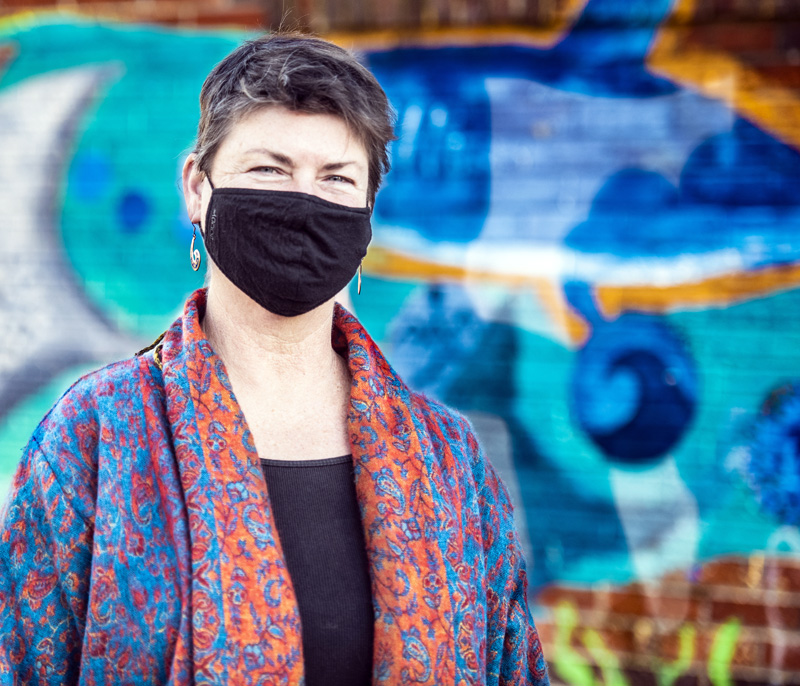 Krisanne Baker stands in front of a mural created by art students at Medomak Valley High School in Waldoboro on Dec. 1. Baker’s own passion for eco-art inspires her students to create art based on ocean life and informed by conversations around climate change. (Bisi Cameron Yee photo)

An undulating wave of clay whales, sea turtles, and sting rays. A sweeping mural of sharks, tuna, and lobsters. A collection of glass transformed into marine creatures, including the occasional blob fish.

Medomak Valley High School artist and teacher Krisanne Baker is transforming bare tile in the cafeteria and brick walls in the recreation area into an immersive underwater experience for students while spurring discussions about conservation and carbon emissions in her classes.

Students in her courses explore various mediums of art, including drawing, clay sculpture, and glass work. During the marine ecology unit, Baker asks students to research a marine creature in the Gulf of Maine, preferably an endangered species.

They start with a scientific illustration of their animal, and slowly work their way toward sculpting or painting the form of the animal for display around the school. Students of all grades and skill levels absorb Baker’s love of marine life, and become aware of how humans impact the ocean’s ecosystem.

Baker grew up on Cape Cod with a mother who was a science teacher and a father who sailed, the perfect recipe for an “ocean-holic,” as Baker refers to herself.

When she first moved to Maine about 30 years ago, her husband was working on Matinicus Island, and she would go to visit and paint on the weekends. She ventured down to South Beach, and found a whale washed up in the waves but had not yet beached.

“I could see ropes around its head going into its mouth,” Baker said. She ran to get help cutting the ropes off of the whale, but ultimately found that the whale was dead. The experience prompted Baker to start researching critically endangered North Atlantic Right Whales, turning her love of the ocean into a passion for art that raised awareness about environmental issues plaguing the area. Or ecological art.

Clay can be a difficult material to work with, and a couple whales had broken tails before they made it to the kiln. But Baker said the students should leave them that way to demonstrate the harm non-breakaway fishing lines do to migrating North Atlantic Right Whales. The National Oceanic and Atmospheric Administration estimates there are fewer than 350 remaining.

Baker won an educator innovation award from the organization Bow Seat Ocean Awareness Programs a few years ago for her innovation with ocean art. Her paintings and sculptures, much like the clay marine animals spiraling on the school’s cafeteria wall, is inspired by artist Robert Smithson’s concept of entropy, or the spiraling process of things falling apart.

A recent science and art collaboration project she completed with research scientist Mike Lomas at the Bigelow Laboratory for Ocean Sciences in East Boothbay depicts mutating phytoplankton in a spiral in the atrium.

Climate change and ocean acidification, in which the ocean absorbs human-made carbon dioxide that causes it to become more acidic, is causing dramatic changes to phytoplankton, according to researchers at the laboratory.

Phytoplankton are microorganisms on the surface of the ocean that make up the base of the marine food chain, but “people don’t normally think about them,” Baker said. Under ocean acidification, some species will die out.

Like the students, Baker began by drawing the phytoplankton while looking at them through a microscope.

“It’s important for students to know what’s going on with climate change,” Baker said. “A lot of families here make their living on the ocean.”

In 2019, Maine’s fishing industry generated $2 billion for the state economy, according to the governor’s office. Lobster harvesters alone generated more than $485 million in 2019, and the industry supports nearly 4,000 jobs from fishing to transportation and marketing annually, according to the Maine Lobstermen’s Community Alliance.

But as ocean water grows more acidic, shellfish such as oysters, lobsters, and clams struggle to form and maintain their protective shells, meaning they are less likely to survive. The U.S. shellfish industry is expected to lose more than $400 million annually due to ocean acidification.

The economic impact would hit coastal Maine communities like those in Lincoln County especially hard, where so many depend on shellfish to make a living.

“It brought home a couple of points in Maine,” Baker said. “My lobstering friends say they have to go out farther and farther as the ocean warms and lobsters seek deeper waters because they are colder.”

Students also discuss sustainability in Baker’s art class, and the importance of reducing plastic consumption to lessen the amount of plastic wrappers and other pollution flowing into the ocean.

After the art projects were completed, Baker said students realized how their actions affected the creatures they were molding and painting in class. But they also realized they could make a difference. Enrollment in the school’s marine biology course doubled after Baker started the marine ecology art unit, she said.

In art class, the students were more engaged because their art had a purpose, Baker added. She is working with the town of Waldoboro to create similar installations in the town office.

The studio is a relaxing environment for most students, despite the weighty topics of climate change and plastic pollution. Through these projects, students are getting involved and “giving ocean-going creatures a voice,” Baker said. However, climate change is “potentially overwhelming,” and hard to talk about.

In class, they watch the film “Racing Extinction,” directed by photographer Louie Psihoyos, known for his contributions to National Geographic. The film exposes illegal wildlife trafficking schemes that contribute to mass extinction of species, but students still come away hopeful.

One of the characters, Shawn Heinrichs, award-winning photographer and cinematographer, tells viewers to start with one thing each day to lessen their carbon footprint. In Baker’s art classes, she encourages students to do the same, including recycling plastic bottles and cutting down on eating meat.

“The movie had me thinking about what I could try to do to help, and I soon realized that one person is not enough to do it – everyone needs to chip in a little,” Kory Donlin, a former student of Baker’s and now a sophomore, wrote in feedback comments on the class.

A long, jagged red line gradually shooting upwards on the mural marine ecology art students painted on a brick wall behind the school maps greenhouse gas emission levels since 1900. The line reaches all the way to the top of the wall, where levels are now, but the graph shows the dip that occurred during the pandemic when people were traveling less, Baker said.

She uses non-toxic mixable oil paints in her own work, and is integrating these materials into the classrooms at Medomak Valley High School, too.

“I’ve always been super conscious about keeping the studio and drawing room as non-toxic as possible,” Baker said.

Beyond raising awareness about climate change and pollution in the ocean, Baker said she wants to teach her students they “can take anything they care about and communicate it to people through art.”

She leads by example, with a new exhibit on the horizon of a wire sculpture of Baker’s body based on a portrait taken of her floating in the ocean water. The sculpture will hang with wire strands of DNA coming out of her feet, and inside of her wire body, glass figures of phytoplankton will be pouring out to symbolize human reliance on these organizations that are not often thought about, but are threatened by climate change.

The show will be in collaboration with artist Elizabeth Moss in Falmouth.

Some of her students completed similar glass works of endangered animals in the ocean, such as Great White sharks.

“Knowing that just creating an endangered ocean species out of clay and displaying it can create awareness and make people really think about extinction makes me want to do it way more,” said Olivia Pelkey, another former student of Baker’s and current sophomore.

She made a clay rendering of a North Atlantic Right Whale for the wall spiral.

“I’m just so proud of them and all the work they’ve done,” Baker said. “Their engagement has been really heartwarming.”