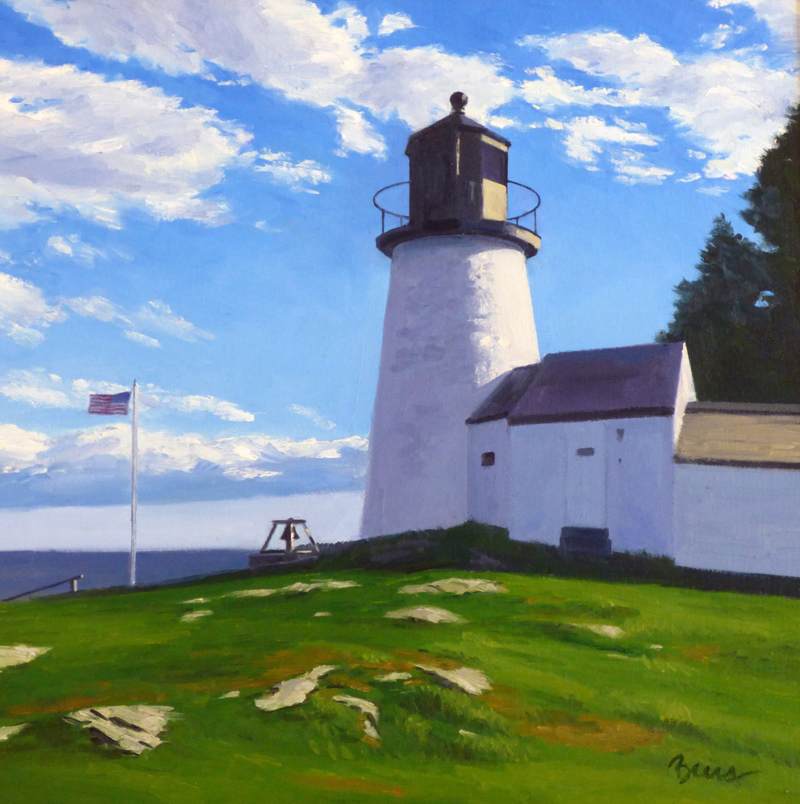 Gleason Fine Art’s July show, “Kevin Beers: Points of Light,” began June 28 and will run through July 31, with a reception for Beers on First Friday, July 6, from 5-7 p.m. As always, the public is invited to stop by the gallery, have a glass of beer or wine, and chat with Beers, one of the gallery’s most engaging artists.

When Beers was in art school, abstraction was all the rage, and although he was clearly in possession of great talent, his professors constantly tried to dissuade him from representational painting. Instead, listening to his own muse, Beers was drawn to the powerful realism of Edward Hopper, Rockwell Kent, and George Bellows, all of whom had fallen in love with the coast of Maine, especially Monhegan Island.

Years later, Beers visited Maine, seeking out the very places painted by Hopper, Bellows, and Kent — craggy islands, dramatic headlands guarded by lighthouses, sun-dazzled white buildings, and intense blue skies and seas. As with so many artists before him, Beers was struck by the quality of light in Maine, by the way it bounced off surfaces everywhere, creating sharp shadows and brilliant colors.

Every summer after, Beers packed up his car and headed to Monhegan Island for the summer months, becoming one of that island’s most recognizable artists. Reluctantly, he always returned to Brooklyn, N.Y. come fall. Three years ago, that all changed. Beers and his wife, Amy, decided to move to Maine, settling in a spacious 19th century sea captain’s house in the Midcoast village of Thomaston.

With the freedom to explore Maine’s coast, Beers soon discovered a veritable treasure trove of spectacular points and lighthouses — Pemaquid, Owls Head, Two Lights, and Boothbay Harbor’s Burnt Island. With “Points of Light,” his new show at Gleason Fine Art, Beers delights viewers with the joy he has found living in Maine, painting the rugged beauty of Maine’s coast and its simple, stark-white buildings.