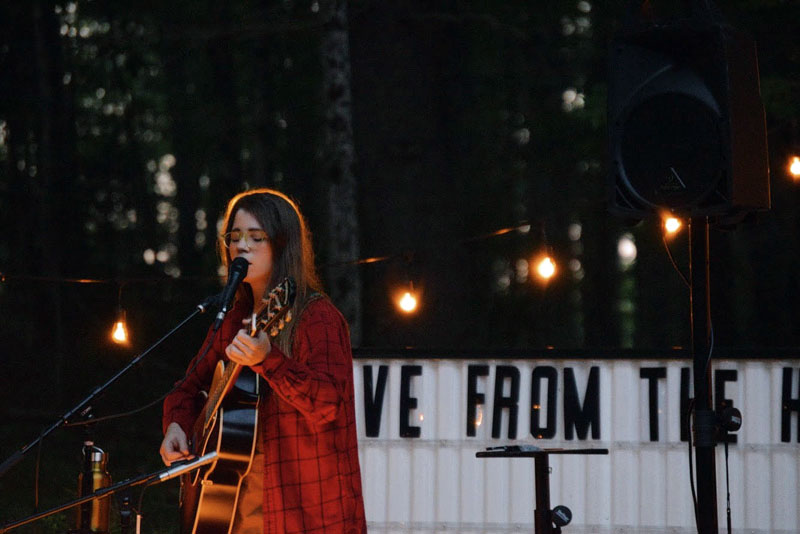 Lady Lamb, aka Aly Spaltro, performs the first show of her “Live From the Hive” series at her home in Edgecomb on Saturday, Aug. 21. (Hailey Bryant photo)

When Aly Spaltro decided to host concerts at her Edgecomb home, she felt like she’d found a loophole to perform live again.

Spaltro, known by her stage name, Lady Lamb, first had the idea to use her property as a concert venue about a month ago.

“I’ve got all this land and it’s sectioned off in really cool ways,” she said. “There’s a campfire section and a picnic area and so much space to roam.” The layout lends itself well to physical distancing, giving attendees multiple spots to gather in small groups.

The concept of an at-home concert series was not new to Spaltro, who did a 50-city tour of living rooms, backyards, and basements after the release of her “Tender Warriors Club” EP in 2016.

The first studio album by Lady Lamb, “Ripley Pine,” was released in 2013, followed by “After” in 2015 and “Even in the Tremor” in 2019. The indie rock artist has toured the country, selling out venues across the U.S. and garnering praise for her music and lyrics from outlets like Pitchfork.

Many of Spaltro’s musician friends have been using their time in quarantine to make new music or livestream concerts on social media, but she put music on hold for a few months, focusing instead on moving all her belongings back to Maine.

“I felt very happy to just have time to be alone because I’m super introverted naturally,” she said. “I wasn’t feeling very creative with writing new music because all my self-expression was going right into the house.”

Spaltro grew up in Brunswick but moved to Brooklyn, N.Y. in 2010, where she lived until this spring. Her family still lives in Maine, mostly in Brunswick and Portland, and when her older sister found out she was pregnant, Spaltro began looking for a house nearby.

She found her dream house in Edgecomb, which her mom nicknamed “The Hive” — Spaltro’s stage name early in her career was Lady Lamb the Beekeeper, before it was shortened — and she got the keys in early March, just before everything shut down due to the pandemic.

Spaltro and her band were on their way to Atlanta for her first tour date on March 13 when they received the news that they had to turn around. She emptied her tour van, filled it with some furniture and decor she had in storage, and drove to Lincoln County.

She told the crowd at her Aug. 22 show that on her first night in Edgecomb, she was shocked by the night sky — after a decade in Brooklyn, she hadn’t seen that many stars in years.

The first “Live From the Hive” show sold out in under a minute, with just 45 tickets available. Spaltro got a lot of messages asking if the website had glitched. She was “blown away” by the response and has scheduled seven more shows so far, all of which sold out in minutes.

Shows are currently planned through Sept. 12, but Spaltro hopes to continue until the weather gets too cold for outdoor concerts.

“I just hope that people will feel a sense of lightness,” Spaltro said. “I myself have felt so much stress from all the uncertainty, the lack of socializing and being able to talk to people and be around people, so I’m hoping that if people have a bit of a heavy heart, it’s lifted a little bit.”

At the first show, it seemed that her hope was fulfilled. “It was honestly one of my favorite concerts, which is strange to say during a pandemic,” said Olivia Ruhlin, who drove almost two hours from Cornish with a group of friends. “Sitting on her lawn, eating popcorn that she had spent four hours making earlier that day, being welcomed into her space — all while following CDC guidelines — made me feel like I was valued and respected as a listener of her music.”

“I am so appreciative of the work she put into ensuring that we could still enjoy a live performance without compromising our health and safety,” Ruhlin said. “It made it that much more special.”

In addition to providing a place for fans to gather and experience live music for the first time since March, Spaltro wanted her ticket sales to benefit Maine organizations.

Twenty percent of ticket and merchandise sales from the Aug. 22 show benefited the Somali Bantu Community Association and its fundraiser to acquire the 107-acre Hilliard Farm in Wales, Maine. The Sept. 4 and 5 shows will benefit the restoration of The Abyssinian Meeting House in Portland, the third-oldest standing African American meetinghouse in the country.

“I did a bunch of research on social justice organizations in the state, as well as those that are in place to support immigrants and Indigenous tribes here,” Spaltro said. “I chose a few that feel important to me and necessary to creating a more diverse and equitable future in Maine.”

For information on future “Live From the Hive” shows, visit @ladylambjams on Instagram and Facebook. Tickets are sold for $25 each at undertowshows.com.