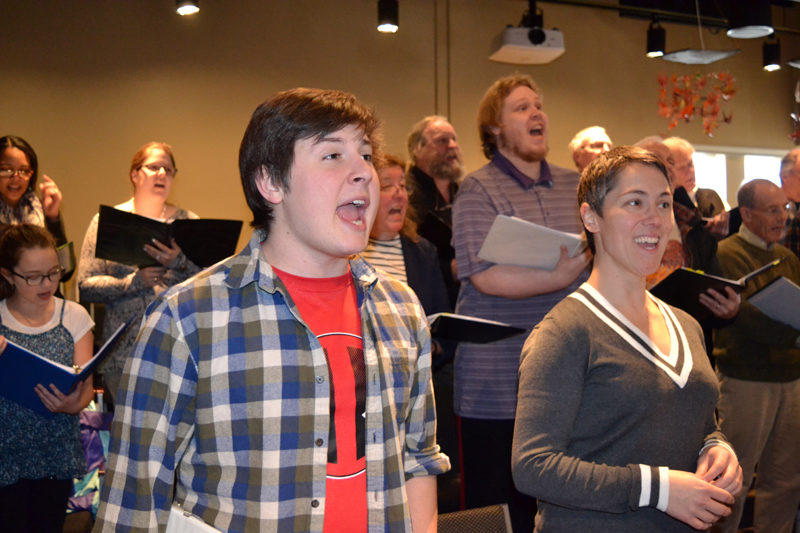 Foreground from left: Roosevelt Bishop, who plays Bert in Lincoln County Community Theater’s upcoming production of “Mary Poppins,” and Victoria Hamilton, who is in the title role, sing at a run-through of the musical on Sunday, March 12. (Christine LaPado-Breglia photo)

The magic of Mary Poppins: The Porter Meeting Hall at Skidompha Public Library in Damariscotta was the scene of a most energetic and entertaining run-through on the afternoon of Sunday, March 12 of Lincoln County Community Theater’s upcoming production of “Mary Poppins – In Concert.”

The LCCT version of the hugely popular 1964 Disney film features Victoria Hamilton in the title role made famous by Julie Andrews and Roosevelt Bishop as Bert the charming chimney sweep, played by Dick Van Dyke in the film. “Mary Poppins – In Concert” will run March 17-19 at Lincoln Theater.

Seated at the piano, the show’s music director, John Mulcahy, led the cast, which includes a sizable chorus called The Spit Spot Singers, through song after familiar song. The group warmed up with a rousing version of “Supercalifragilisticexpialidocious” before running through the production from the top, starting with “Chim Chim Cher-ee,” sung by Bishop as Bert. The 25-year-old Bishop, it must be said, is truly impressive, both as an actor and as a singer; his voice is assertive and excellent.

Zora Margolis as Mrs. Brill, the Cockney housekeeper, promises to be a laugh-inducing delight in the upcoming show if Sunday’s run-through is any indicator. The Edgecomb resident – whose acting resume includes national television commercials and the first feminist musical at the New York Shakespeare Festival – is clearly at home in musical theater. 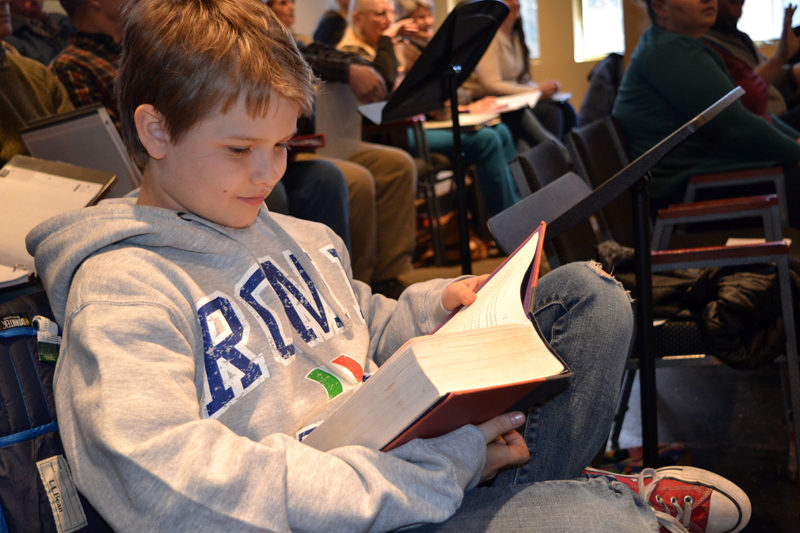 Andrew Lyndaker, who plays Michael Banks in Lincoln County Community Theater’s upcoming production of “Mary Poppins,” buries himself in a book while awaiting his turn to sing. (Christine LaPado-Breglia photo)

Other standouts – besides, of course, Hamilton as Mary Poppins – include Andrew Lyndaker as Michael Banks; Emerson Harris as his sister, Jane Banks; and Ben Proctor, covering more than one role.

I asked Lincoln Theater Executive Director Andrew Fenniman, who is in The Spit Spot Singers chorus, why the show is titled “Mary Poppins – In Concert.” He explained: “While the show is costumed and there is movement, staging, and projections, it is not a fully staged production … thus ‘In Concert.’ And while there is lots of work just like in a full show, a concert version allows us to have singers in the chorus, both young and old, be fully involved without having to worry about being able to memorize all the music, enabling us to be more inclusive of the community.” 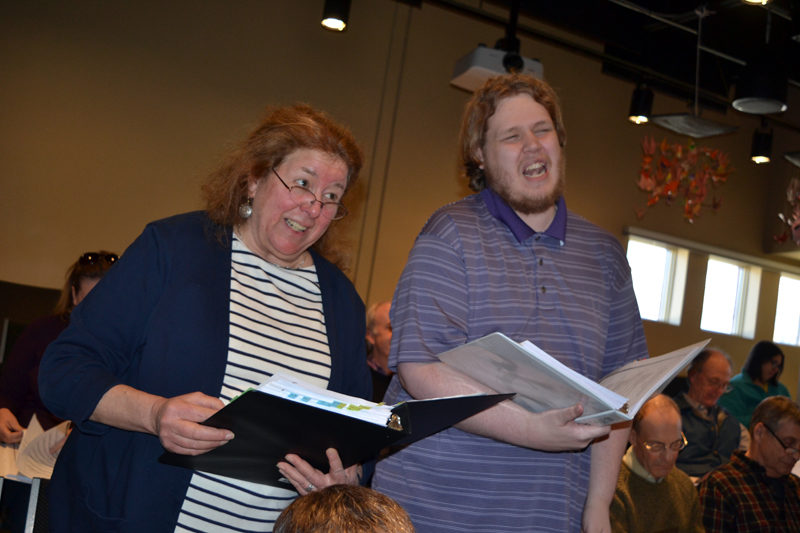 It was evident at the March 12 run-through that Fenniman loves to sing. “For the fifth year in a row, the chorus, dubbed this year The Spit Spot Singers, has been rehearsing every Sunday afternoon since early January,” he said. “One of the joys after putting in all that work is to sing with the accompaniment of a live professional orchestra – something many singers dream of but few have the pleasure of experiencing. There is nothing like the colors and sounds of live instruments to add depth of emotion to the singing.” That orchestra – The Poppins Pops, featuring local keyboardist Sean Fleming, among others – was not part of the recent run-through but will round out the production when it hits the Lincoln Theater stage.

Fenniman spoke for perhaps the entire cast when he said that the LCCT production of “Mary Poppins – In Concert” aims for “a sense of fun that helps create a musical adventure that brings joy to the audience – and to everyone on stage.”

“Go and chase your dreams – you won’t regret it. Anything can happen if you let it.” – Mary Poppins

Email me at clbreglia@lcnme.com or write me a letter care of The Lincoln County News, P.O. Box 36, Damariscotta, ME 04543. I love to hear from readers.