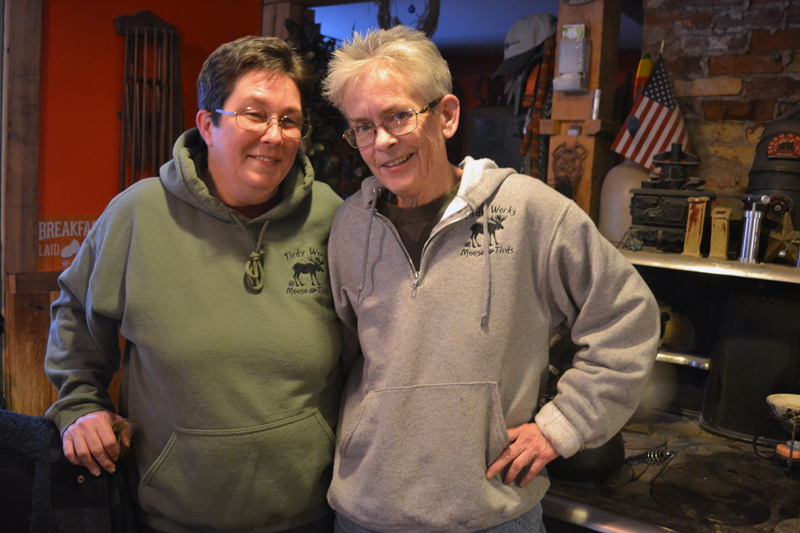 Mary Winchenbach (right) and her wife, Deb Nicholls, the duo behind Tirdy Works, in their Somerville kitchen on Wednesday, Jan. 9. (Christine LaPado-Breglia photo)

Tirdy Works’ wild ride: Hanging out with Mary Winchenbach – Somerville’s now widely famous “moose-poop lady” – is something akin to what I imagine it must have been like to spend time with the late comedian Robin Williams, known for his rapid-fire delivery of ad-libbed comedic lines.

In fact, the hour and a half or so that I spent on Wednesday, Jan. 9 with Winchenbach (pronounced “Winchenbatch”) in the home she shares with her wife and Tirdy Works business partner, Deb Nicholls – and their three adopted kids, seven cats, three dogs, and dozens of chickens, guinea hens, and ducks — left me almost breathless from laughing. It also resulted in a tired right hand from trying to take notes as fast as Winchenbach drily tossed off one-liners – pretty much one after another for the entire time I was there.

“So this here’s a ‘stool sample,’” Winchenbach told me as she picked up a tiny three-legged wooden stool onto which a varnished moose poop was attached. “Because it’s embarrassing to go into the doctor’s office to take your s—. So we’ve got these for taking to the doctor’s.”

Picking up another shiny moose poop, Winchenbach said, “I’m trying to find little boots to put on the turd to make the S—kicker.”

Taking a wooden picture frame onto which numerous moose poops were attached from the top of a pile of picture frames in the to-do pile on her kitchen table, Winchenbach announced that they were intended “for pictures of your favorite s—head. We provide four extra turds with turd-attachment instructions because it’s not good when you crack a turd – it’s not funny.” 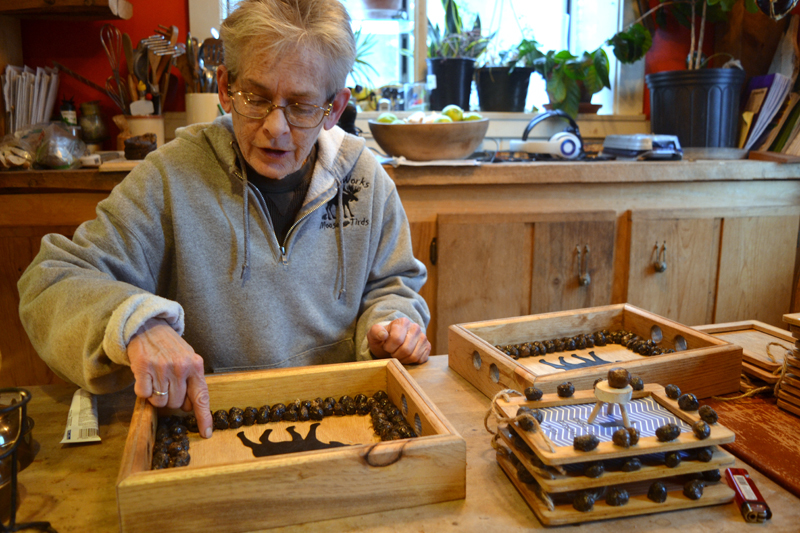 Winchenbach makes many other products with feces-related names like S— on a Half Shell (just what it sounds like: a moose poop with little eyeballs, sitting on a mussel shell), Poo Poo Platters (a play on the Chinese-American pu pu platter), Poo Poo Clocks (the half-hours are “one-turdy, two-turdy,” and so on), S—ty End of the Stick, Dingleberries with Hairy Balls (hanging poops with sheep’s wool attached), Poopsicles, and Tirdy Works’ highly popular Fecal People, cute little dolls made from – what else? – moose poop.

The proverbial s— hit the proverbial fan, as many people know, back in September, when Tirdy Works had a booth at the Common Ground Fair in Unity and a video that someone took of Winchenbach pitching her products went viral. (Go to facebook.com/tirdyworks and scroll down to Sept. 26 to watch the video.)

One thing quickly led to another, and in November, Winchenbach and Nicholls found themselves in Los Angeles filming an interview with funnyman Daniel Tosh for his “Tosh.0” show and in talks with cable network TNT about a reality show.

“They took us out there all expenses paid plus food,” said Winchenbach of the “Tosh.0” interview. “We did a bunch of skits for those guys. And the makeup girl come and they put makeup on me! (The show) is going to be aired in March or April.”

Winchenbach said she and Nicholls were already so well-known at that point that people were coming up to them at LAX saying, “You’re the Maine moose-poop lady!”

Winchenbach said she was recently approached by “Animal Planet” and “North Woods Law.” 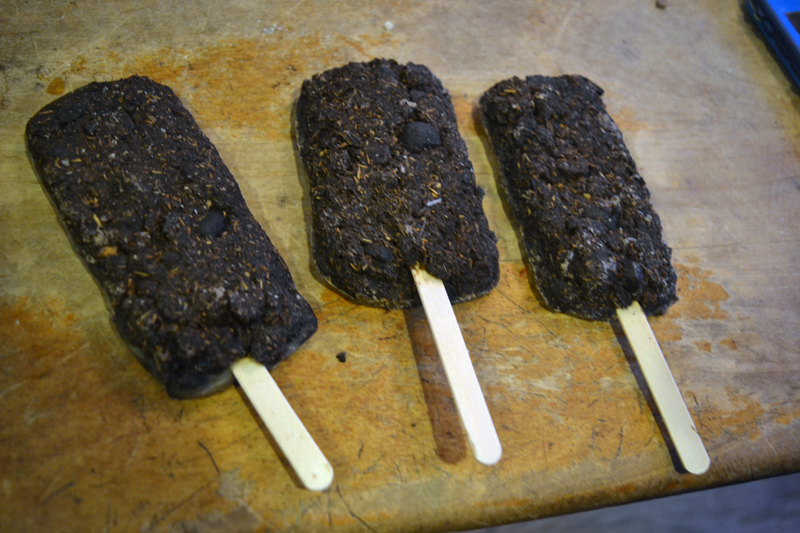 “Jenny (Ramirez, of TNT) told me she’s going to move quickly ‘because you’re in demand,’” she said.

Tirdy Works will be selling items at the craft fair at the Presque Isle Sportmans Show at the University of Maine at Presque Isle on Saturday and Sunday, March 23 and 24.

“We get a free booth up there,” Winchenbach said. “They’re advertising our name to get people up there. I told Jenny and she wants to film us up there.”

Winchenbach’s fame only looks to get more intense as she digs out from under the thousands of orders she received as a result of being at the Common Ground Fair and is contacted by newspapers and television shows around the country and beyond. “I’m working right now on acquiring myself an agent and I’m going to let the agent figure out what’s in my best interest – money, s— like that,” she said. 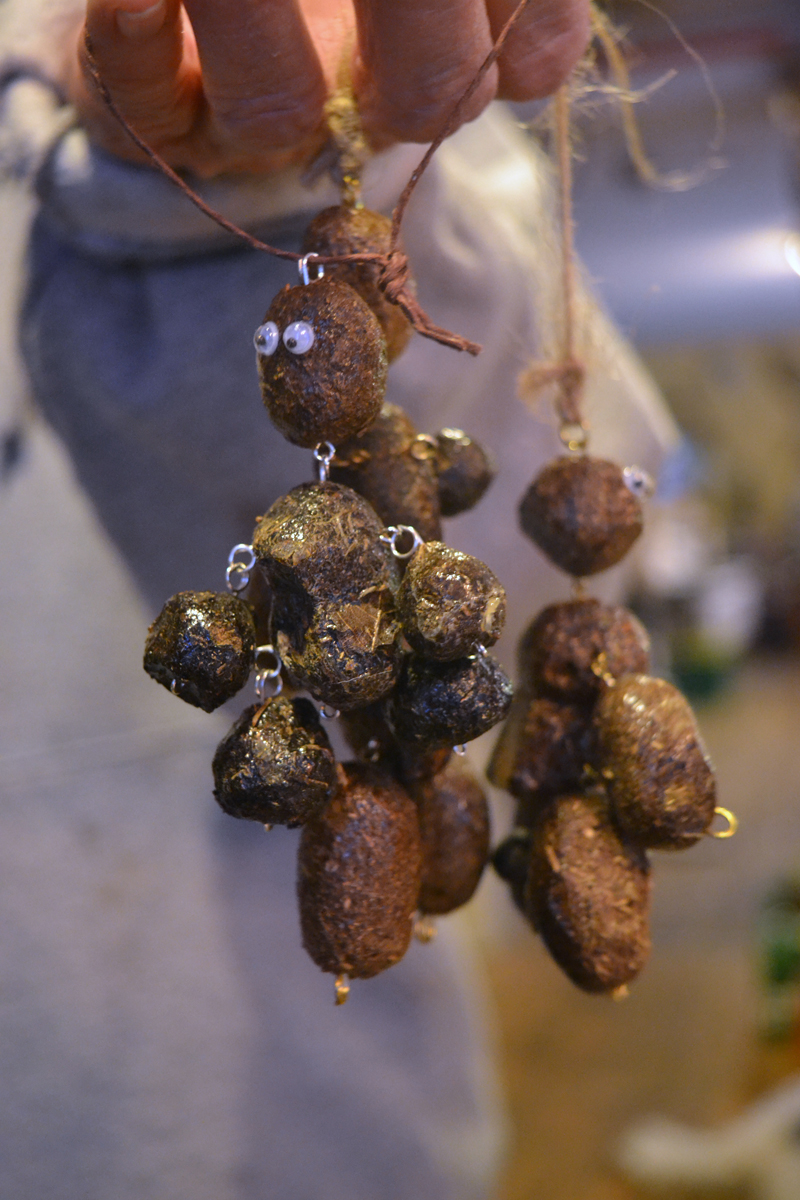 So, OK, some basic Q&A, because everybody wants to know:

How does Tirdy Works process the poop?

“We have like five dehydrators,” said Winchenbach. “First thing you do is put them in the dehydrator, because you don’t want your s— ‘juizzy.’ That’s ‘juizzy’ – j-u-i-z-z-y – not ‘juicy.’”

The poops have to stay in a dehydrator “for at least 48 hours – depends on how juizzy they are.”

Tirdy Works coats the poops with two different types of coating (“trade secret,” said Winchenbach), depending on whether one wants a glistening poop or a more natural-looking one.

Do the treated poops have an odor?No. (I can attest to that.)

Can you eat them?

Not that anyone has eaten or would want to eat poop, but the processed poop was tested at Northeast Laboratory Service in Waterville, Winchenbach said, and it came back with a coliform and an E. coli count of zero. “So basically, it has a lower bacteria count than cooked hamburger,” she said, “so you can eat it, but it tastes like crap.” Zing!

“I think the Webster’s dictionary has it wrong. I’m going to call and tell them they’ve got it wrong,” Winchenbach asserted. “’Tird’ is spelled with an ‘i,’ otherwise ‘bird’ would be spelled ‘burd.’” Enough said.

“I can’t get over it,” Winchenbach said of her newfound fame. “Turds are universal and everyone can relate to a turd. So, I mean, I think that’s why everyone can appreciate them.”

Tirdy Works is always on the lookout for more moose poop, by the way. “I need a 5-gallon bucket of turds,” Winchenbach told me as she assembled a Poo Poo Platter. “I’m not out, but I’m gettin’ nervous.”