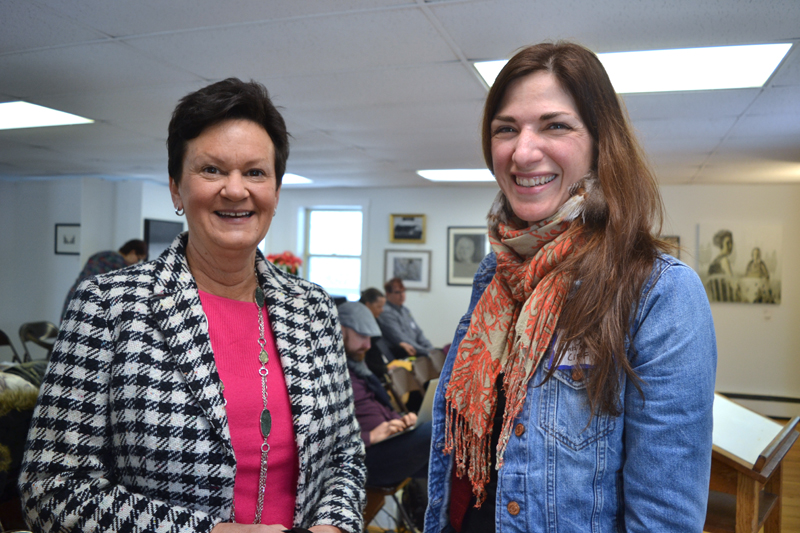 In fact, the elements had been so daunting that Damariscotta’s Iditarod turned out to be the first in the four-town series instead of the third, according to Maine Arts Commission Executive Director Julie Richard. “The first two were snowed out and are rescheduled for the end of February,” Richard told us in her opening remarks.

Among those in attendance were representatives of arts-related organizations, such as Emily Peckham, the executive director of the Points North Institute in Rockland (the organization behind the Camden International Film Festival), and Anna Witholt Abaldo, gallery director and curator at Maine Farmland Trust and co-director of center operations at Joseph A. Fiore Art Center in Jefferson. 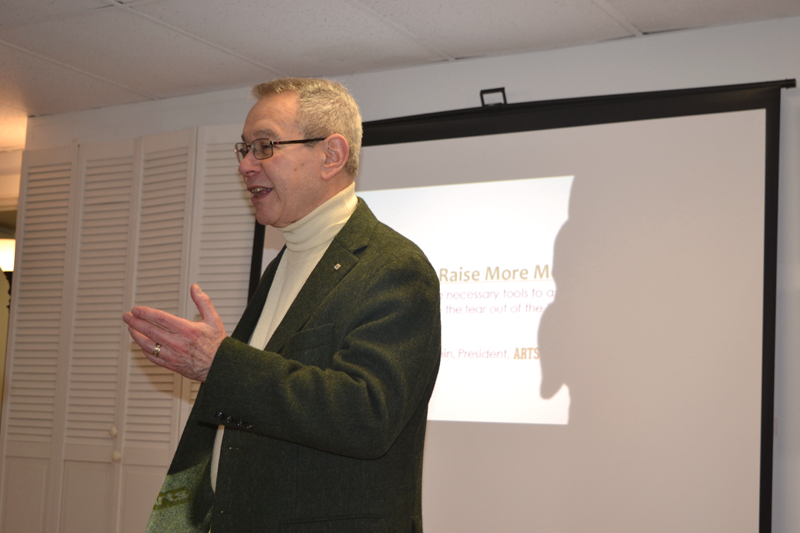 A number of area artists, such as Gerd Koehler, Helen Warner, and Alice de Mauriac, were at the Iditarod. De Mauriac is also one half of the River Arts organizational power duo that includes her husband, Julio Sanchez Banos, whose smiling face could be seen at the afternoon event as well.

Unlike the world-famous Iditarod sled dog race that takes place in Alaska annually, the Maine Arts Iditarod is not a race, there are no sled dogs or sleds, and the event (thankfully) takes place indoors. (There was snow on the ground outside but we weren’t in it.)

The Maine Arts Iditarod is an annual wintertime event focused on sharing information about the nuts and bolts of the arts world in Maine via talks, workshops, and discussions. The event served as an update on the progress of the Maine Arts Commission’s current five-year cultural plan, which runs from 2015-2020. 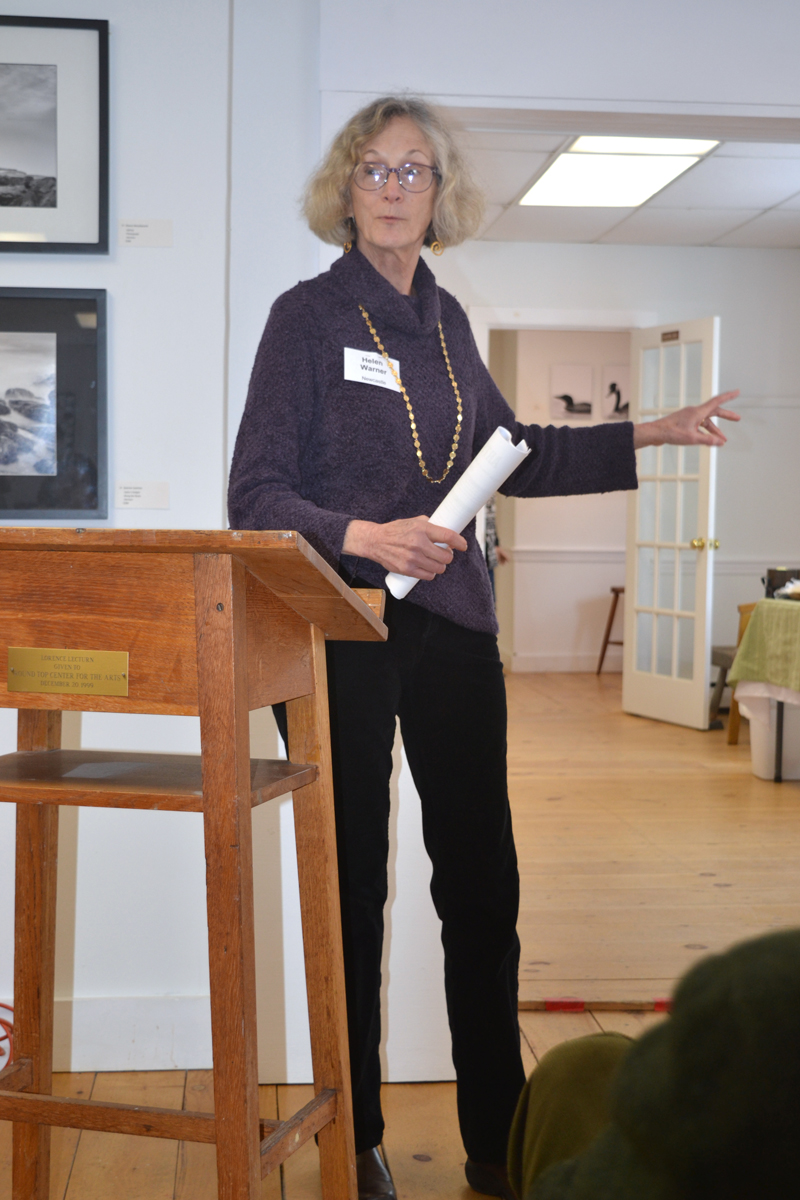 Leading off the day’s agenda was Larry Rubinstein, the president of ArtsEngageME, an advocacy and support organization for the Maine Arts Commission. Rubinstein, who used to be senior vice president of Brandeis University, was there to speak on the topic “How to Raise More Money: A Workshop for Arts Organizations.”

Some of the takeaways from Rubenstein’s engaging talk:

When fundraising, the most important thing is “knowing what you’re raising money for,” Rubenstein said. One must be specific regarding agency needs when approaching potential donors.

Use the internet to research potential donors’ assets, such as property owned, to determine their possible resources.

Extensive information on donors and an engaged, supportive board are very important for any arts organization seeking to raise money.

A “good, functioning annual fund” is crucial for an organization, Rubinstein said. An annual fund must be in place before a capital campaign can occur, in order to “get people used to giving substantial amounts of money.”

A “legacy society” – a program by which an organization receives future gifts from donors, also called a “planned giving society” – is a good thing (especially if it has a meaningful, catchy name that donors will feel particularly drawn to).

The Maine Arts Awards ceremony will take place Sept. 30 in Portland. This will be the event’s second year. Nominations – of any Maine resident, organization, school, business, or community – are open through March 21, in seven categories. Richard said business nominations are especially needed. Go to mainearts.maine.gov to learn more.

Arts + Culture Day will take place at the Maine State House on April 22, when legislators will be able to meet and talk with area artists.

Kerstin Gilg, director of grants and accessibility at the Maine Arts Commission, facilitated a Q&A session on what is working for attendees and what are they most worried about. Baby boomers moving to Maine to retire and enjoy a rich arts community was one of the pluses mentioned, while physical accessibility to buildings used for the arts – old buildings needing ramps, etc. – was named as a problem. 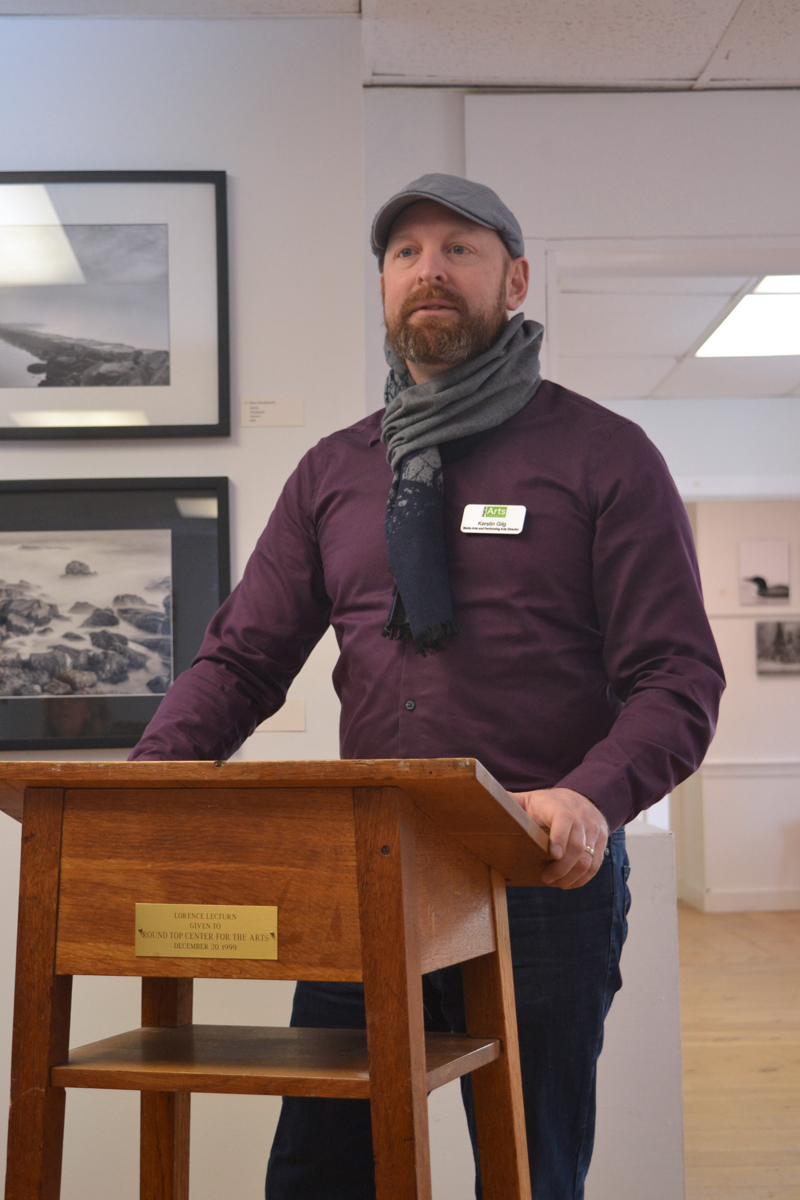 Kerstin Gilg, director of grants and accessibility at the Maine Arts Commission, speaks on the topic of grant funding for artists and art organizations at the 2019 Maine Arts Iditarod in Damariscotta. (Christine LaPado-Breglia photo)

In answer to a question on what attendees saw as being important over the next five years, it was generally agreed that the rural arts movement that began in the Midwest is making inroads into Maine, resulting in an increasing connection between the arts and the natural world.

Richard, a former resident of Arizona, noted at one point that plein air painters come to Maine because of the beauty of its nature and that “kids like arts education that is connected to living in a rural area,” which led to a discussion of how to bring the next generation into involvement with arts organizations.

Gilg announced at one point that the current cycle is open for Maine Arts Commission grants for both organizations and individual artists and that the process of awarding grants involves a public “grants hearing,” during which anyone is able to witness in detail how each grant is awarded.

The town of Freeport recently finished a cultural planning process. “They wanted a performing arts center, but the process revealed a whole bunch of other things” that Freeport wanted to address as well, Richard said.

As for strategic plans, artists and arts organizations should have them, Richard stressed. “I couldn’t imagine doing anything without a strategic plan,” she said.

One should have such a plan when applying for grants, she noted, adding that a strategic plan needs to be kept up to date. “An expired strategic plan is not helpful,” she said before launching into an extensive discussion on how to develop such a plan.

Overall, the Maine Arts Iditarod – which is free to attend for anyone interested — was packed full of information on how to make the arts more vibrant and impactful in one’s life and in the life of a         community.