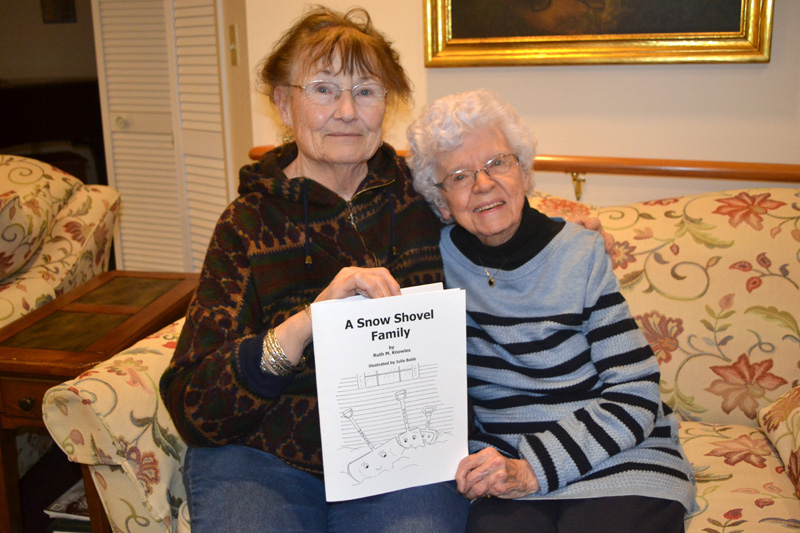 Meeting Ruth Knowles: “There is a wonderful 90-year-old lady named Ruth Knowles who lives at The Lincoln Home and has written a children’s story about a family of snow shovels … intended for 3- to 4-year-olds,” wrote Damariscotta wildlife artist Julie Babb to me in a recent email.

Describing Knowles as “sharp” and “clever,” Babb told me that Knowles would like to get the word out about her recently published book – which has already sold a number of copies at The Lincoln Home – and asked if I might like to interview her.

So, on Thursday, Jan. 24, I met with both Knowles and Babb at The Lincoln Home in Newcastle to talk about Knowles’ book, “A Snow Shovel Family,” a 22-page self-published paperback picture book illustrated with playful black-and-white line drawings by Babb.

“A Snow Shovel Story” is loosely based on a memory that Knowles has of her children “leaving their snow shovels at camp,” she said.

The cute story follows a “family” of three snow shovels from Maine – the parents, George and Clara, and their little son, Tim – as they get left behind in a snowbank when they would rather be put to work. (No spoiler alert here, but the book does have a happy ending.)

Knowles said she wrote the story a couple of years ago when she still lived in Vassalboro. After coming to live at The Lincoln Home just over a year ago, she met Babb during a search for someone to illustrate her book.

“Illustrations are outside my expertise, but it was a lot of fun,” said Babb, who is widely known for her meticulous, beautiful gouache paintings of birds. “I must say, I have never drawn snow shovels with faces before. I had a good time doing it!”

“I’m very happy with the illustrations,” Knowles said with a smile, agreeing with Babb that her book could also be used as a coloring book.

Will Knowles write another children’s book?

For the record, Knowles, a former schoolteacher, is also the co-author of a history book titled “History of St. Albans, Maine” and has written for Discover Maine Magazine and Maine Life Magazine.

To buy a copy of “A Snow Shovel Family,” which costs $6, contact Babb by email at jbabb@tidewater.net. 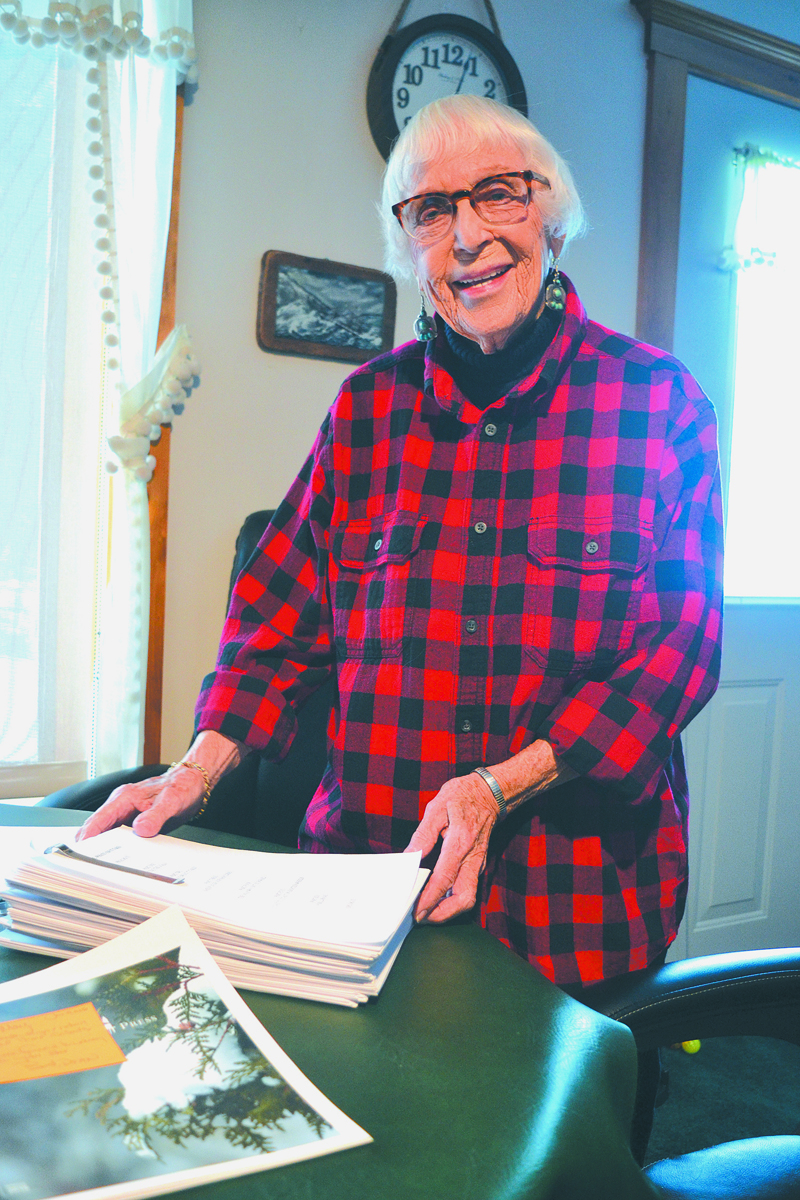 Capturing the beauty of January: Last week, the LCN ran a column, “No Longer Lower Round Pond,” by occasional contributor May B. Davidson, who lives in Whitefield. Tucked into the upper right-hand corner of the church page, page 7B, it was titled “January stars.”

I highly advise those who have not read Davidson’s piece to do so. It is one of the most beautiful pieces of writing I have read in quite some time.

Davidson takes the title of her piece from pianist George Winston’s “January Stars,” a moving solo piece that she rightly says “bring(s) forth a true vision of a star-pierced sky.”

Davidson, in a poetic and succinct column, captures the stark, crystalline beauty of a freezing Maine winter.

“There is that treasured moment before bedtime when stepping into frigid air for a long look at the lanterns of heaven and a moon caught in a pine filtering its shadow tones over the iced silk of snow, silvering the night,” she writes.

She juxtaposes the experience of year-round Mainers with that of those who head south for the winter: “(C)an tropical residents ever feel that escalation of joyful expectation when mud season appears and our vehicles all become the same color for those of us living on a dirt road? Can they feel that rapture of seeing the first brave crocus blooming in the sunny shelter of a granite foundation?”

As a California ex-pat to Maine – and one who embraces the winters here – I have a great appreciation for the distinctly delineated change of seasons here and the expectation that builds for the season following whichever one is the current one.

As Davidson puts it, “The changes in our northern climate are sharp-edged; they make us appreciate their glories when they arrive to reward us.”