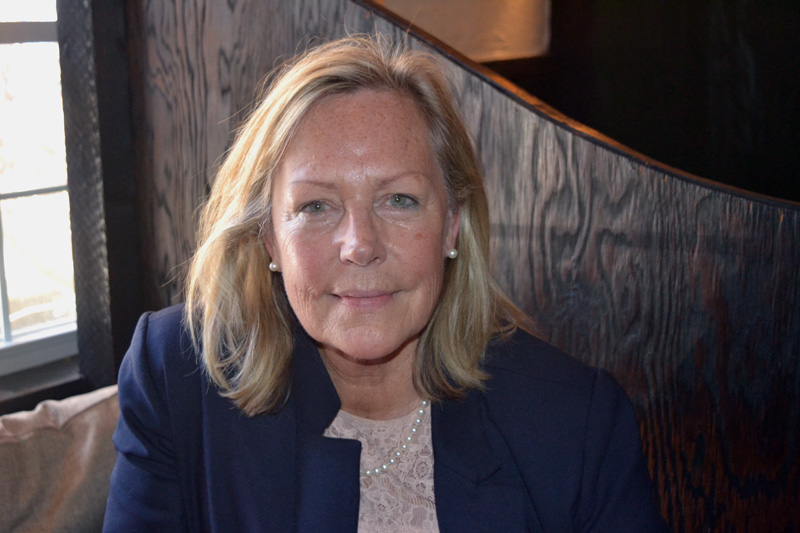 Co-sponsored by the Boothbay Harbor Region Chamber of Commerce and the Boothbay Region Art Foundation, “What’s Nude in Boothbay Harbor?” features more than 40 artists working in various mediums and styles. The show, as a recent press release about it says, features “artistic interpretations of the beauty and shape of the human form.”

The pieces in this year’s show range from the quietly reverent, such as Southport artist Rick Dickinson’s “Golden,” to the humorous work of Boothbay Harbor painter Robert McKay. McKay’s “Size Matters” features three lobstermen holding lobsters in a playful pose. Another McKay painting features a sternwoman on a lobster boat clad only in bright-yellow rubber gloves and boots.

“What’s Nude in Boothbay Harbor?” is the brainchild of Patricia Royall, the chamber’s executive director. I had the pleasure of having lunch with Royall at The Thistle Inn in Boothbay Harbor recently, during which time we talked about the show and how it evolved.

Royall said she first put together a show called simply “What’s Nude?” back in 2001, when she ran a venue called Abracadabra Fine Arts Gallery in Brunswick. That show ran annually for three years.

In 2007, Royall opened Royall Gallery in Richmond and the “What’s Nude?” show found its new home there. She said 300 people turned out for the show’s first opening reception there, so many that the crowd had to spill over from her cozy gallery into artist Edward McKenzie’s neighboring gallery.

Health challenges forced Royall to close her Richmond gallery at the end of 2008.

“I am excited about the diversity of the show,” said Royall. “It’s a fun show. Even though artwork can be serious, it can also be fun. It’s never boring.”

Royall said the fun at last year’s show included the opening reception being “crashed by live ‘nudes’ in costumes that looked like they were nude. These were well-known people in this community,” she said, laughing. “I always feel like we should take advantage of any opportunity we have to smile and laugh and feel joyful.”

“Plus, it’s something to do in the winter,” Royall said of the show that is always held during the winter months.

The “What’s New in Boothbay Harbor?” art show runs through Saturday, Feb. 23 at the Boothbay Region Art Foundation, 1 Townsend Ave., Boothbay Harbor. In addition to the regular show entries, there will be a wall of “small nudes” available for $20 each.

An opening reception will be held on Saturday, Feb. 16 from 5-7 p.m. Contact Royall at the Boothbay Harbor Region Chamber of Commerce at 633-2353 for more information.

Little and very cool: There’s a cool little art show up in the glass case just outside the entrance to the dining commons at Lincoln Academy in Newcastle. And when I say “little,” I mean little. Each of the pieces in LA’s first annual Post-it Show is created using a 3-by-3-inch Post-it note. More than 150 students took part.

The result is a colorful, intriguing mosaic of tiny pieces – some, such as the elaborate pottery-embellished pieces, in 3D. Pieces range from drawings to prints to paintings to collage to the aforementioned ceramic-centric pieces. Some of the Post-its feature top-notch manga-style cartoon drawings. One features a lovely, colorful cut-paper flower in 3D.