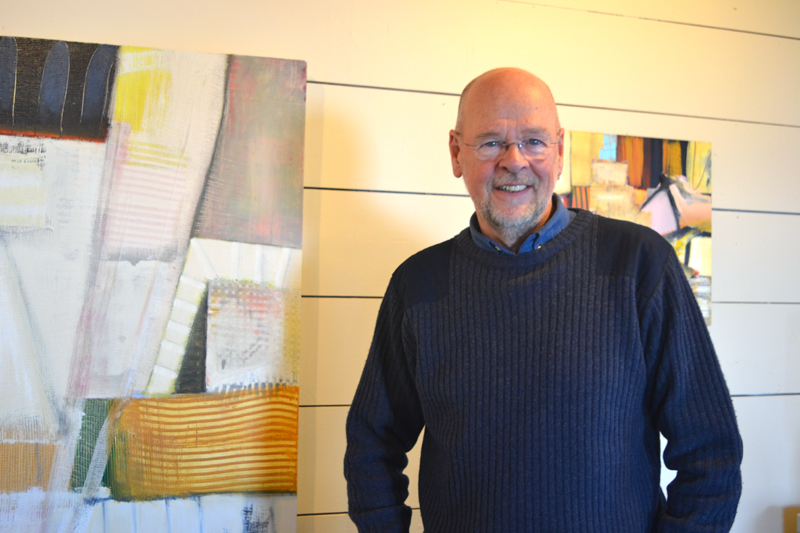 Creativity from coast to coast to coast: Last month, when I went to view the Great Salt Bay Community School art show in the cafe at Rising Tide Co-op in Damariscotta (see “Lincoln County Artsbeat,” Jan. 12), I ran into an abstract painter named Jaap Eduard Helder. Recently relocated to Lincoln County from Belfast, in Waldo County, Helder was having lunch with a woman named Mary Harding, the curator at the George Marshall Store Gallery in York. Helder’s artwork is on exhibit at that gallery.

On Thursday, Feb. 14, I met up with Helder, who lives in Round Pond, at his studio in Damariscotta – a bright, welcoming space above Fisherman’s Catch Seafood Market – to get better acquainted with him and his visually intriguing work.

Helder’s paintings are notable for their ability to create both a sense of depth and of items jutting out at the viewer while using only two dimensions. They also invite one to use one’s imagination in trying to decide just what the imagery represents — a pleasant task.

Helder, who is also a photographer, was born and raised in the Netherlands and lived in Ireland and Israel before moving to Boston and then Maine. “I have lived on the coast all my life,” he said. 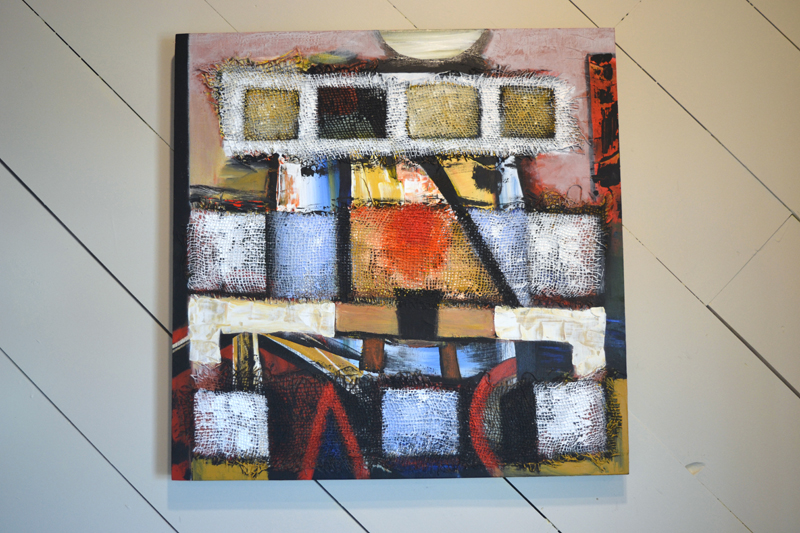 Coastal images – “faded colors, scratched surfaces of fishing boats, oil tankers” – inform Helder’s work, both his paintings and his photographs, which are extreme close-ups of such things as a train car with aging, peeling paint. Helder’s photos look amazingly similar to his paintings, which should come as no surprise, as they are generated by the same eye and hand. Helder calls it “cross-pollination” between the two art forms.

“I love the beauty of decay. I love those faded industrial blues and greens,” Helder said, adding that he grew up “in a small town with a big steel mill,” near the port city of Rotterdam.

A good example of Helder’s industrial-style “abstract” photography can be seen on the album cover of the Tom Luther Quintet’s 2015 CD “Necessity.”

“I’ve always been creatively active, from my teens,” Helder said, who said that, in addition to painting and photography, “restaurants were a creative expression.” A former restaurateur, he used to own a restaurant called The Vinyard in Portland, “Portland’s first restaurant-wine bar,” as Helder described it, and a restaurant featuring organic food called The Pepperclub, named after late jazz saxophonist Art Pepper (Helder is a jazz fan).

After selling The Pepperclub, Helder moved to Jonesboro, in Washington County, because he “wanted a more rural life.” After living in Jonesboro for 10 years, he moved to Belfast, where he lived for about six years and worked as a wine buyer at the Belfast Co-op in addition to being an artist. Helder officially moved to Lincoln County Jan. 1. 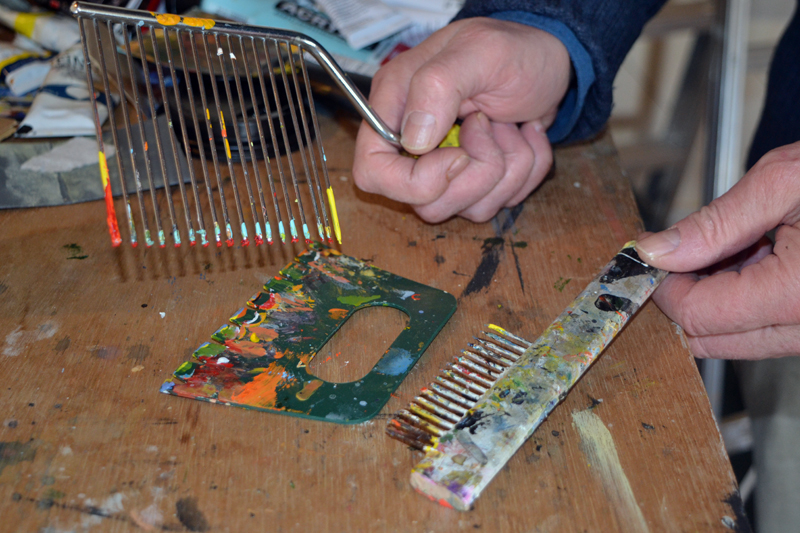 Some of the tools used by Jaap Eduard Helder to achieve the textures he often incorporates into his paintings. (Christine LaPado-Breglia photo)

“I got lucky when I found this studio. The views out all the windows are great,” Helder said. Large windows look out onto Main Street and Damariscotta’s municipal parking lot on the waterfront.

As for how Helder’s paintings – which often take weeks to complete – come about, Helder starts with a square wooden panel (24-by-24-inch panels are his favorite), which he covers with black gesso as a base on which to paint.

“I do not work from any kind of preconceived idea,” he said of his process. “It’s all intuitive … It’s more difficult (than realistic painting) because you have nothing to go by.” 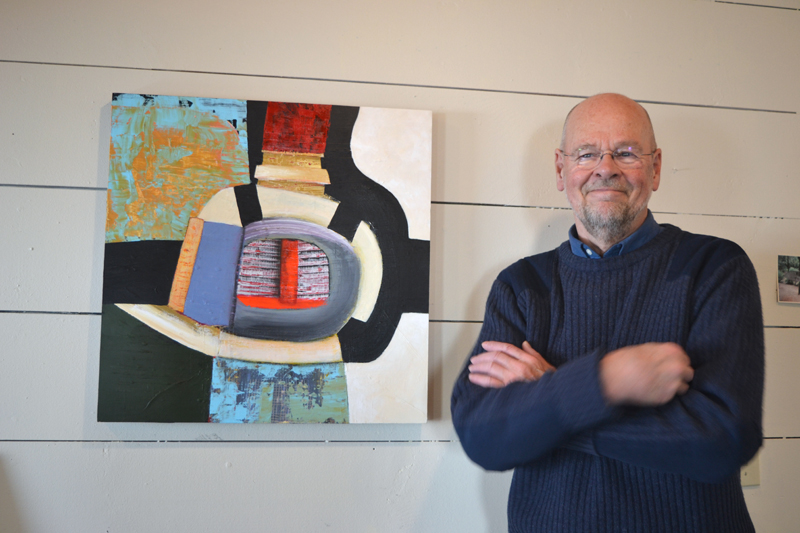 Helder added that he likes “the acrobatics, the hand swoop” of applying paint to board, using tools such as a metal-toothed brush cleaner to add texture to the applied paint. He said he likes the juxtaposition of smooth and rough in the same painting.

“I can be rough on wood,” he said of his technique. “If I had canvas, I’d go right through it.”