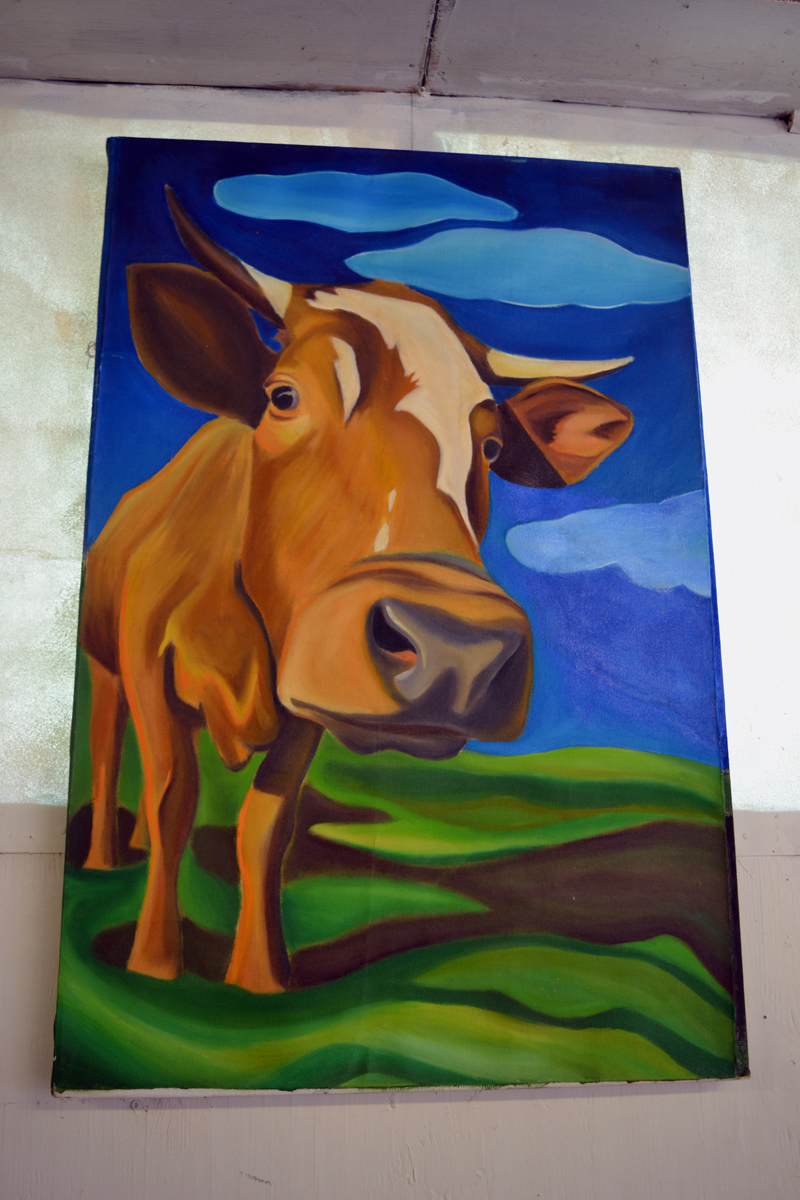 Jessica Speyer’s large, colorful painting of a cow is part of the current employee art show at Sheepscot General in Whitefield, which runs through Tuesday, April 30. (Christine LaPado-Breglia photo)

Art in the country: There’s an art show on the walls of the community room at Sheepscot General – that oasis of goodness smack-dab in the middle of the beautiful rolling farmland of Whitefield – that is really worth spending some time checking out. It’s an exhibit of work – lots of it – by the employees at the rural cafe, store, and farm, and it gives one insight into what makes those nice folks tick.

Sheepscot General baker Liza Gottlieb, for instance, makes some of the best pastries and cakes anywhere (her divine chocolate cakes have become the stuff of legend). She also makes art. Gottlieb has several pieces in the current show at Sheepscot General, including two acrylic self-portraits.

I always find it interesting to see how artists view themselves in creating a self-portrait, what they choose to capture in portraying themselves. In Gottlieb’s case, she nicely captures the calm seriousness in her nature (which is in addition to her friendly, cheerful side, as people who know her can attest to).

Textile artist, printmaker, and self-professed “kitchen witch” Cat Sawyer also weighs in with a self-portrait, a bold black-and-white block-print piece featuring the artist with closely cropped hair and wearing glasses and a scarf. Sawyer includes other striking block-print pieces, including “Venus, No Furs,” a red-and-white piece whose title plays off of the Leopold von Sacher-Masoch novella “Venus in Furs” and whose subject matter closely resembles Sandro Botticelli’s 13th century painting “The Birth of Venus.”

Sawyer’s loom – on which she made several of the woven textile pieces she has also included in the current show – is featured as well. It sits prominently, with a piece in progress on it, on the floor in front of her artwork and bears a small sign advising people that they can ask Sawyer for a demo.

Near Sawyer’s work is that of Jessica Speyer. Her large, colorful, almost cartoon-like painting of a cow is fabulous.

On the other side of the room, Peter Kelley’s contemplative, often abstract work seemingly expresses his interior life. “This is a collection of subconscious texture drawings,” writes Kelley in his short artist statement of some of his work. One of those drawings is “Morpheus,” a minimalist piece centered on a line drawing of an oval and seemingly named after Morpheus, the god of sleep and dreams. Another piece, “Sherman Street Attic Dream,” is a more complex drawing done with charcoal.

Kelley also offers four small, unframed photographs “selected for their light, texture, and composition as images unto themselves,” as he puts it. One appreciates Kelley’s sharing of his inner way of seeing.

Joshua Robbins, who says he is “not an artist” in his artist statement, offers some eye-catching work, including several prints and a fantastic sketched caricature of a janitor at work.

Near Robbins’ work is that of Sheepscot General’s general manager, art show coordinator, and all-around nice person Penny Moshier – a large quilt and a poignant pen-and-ink portrait of a person wrapped in an American flag.

Molly Russell’s inventive collages are cool, as are her drawings, particularly her two-piece study of owls: “Now You See Me” and “Now You Don’t.”

Even Leo Marcus, the very young son of Sheepscot General owners Ben and Taryn Marcus, weighs in. Leo and his mother, along with Jessica Truhaft, Eva Kelley, and Ana Kelley, created a large untitled mixed media piece that hangs between Foley’s and Gottlieb’s work. Fun!

Word to the wise: Check out the show this Friday, April 26, which is Pizza Night at Sheepscot General (from 5-8 p.m.) and get a double dose of goodness – food and art!

Sheepscot General is located at 98 Townhouse Road in Whitefield and is online at sheepscotgeneral.com. Call 549-5185 for more information.