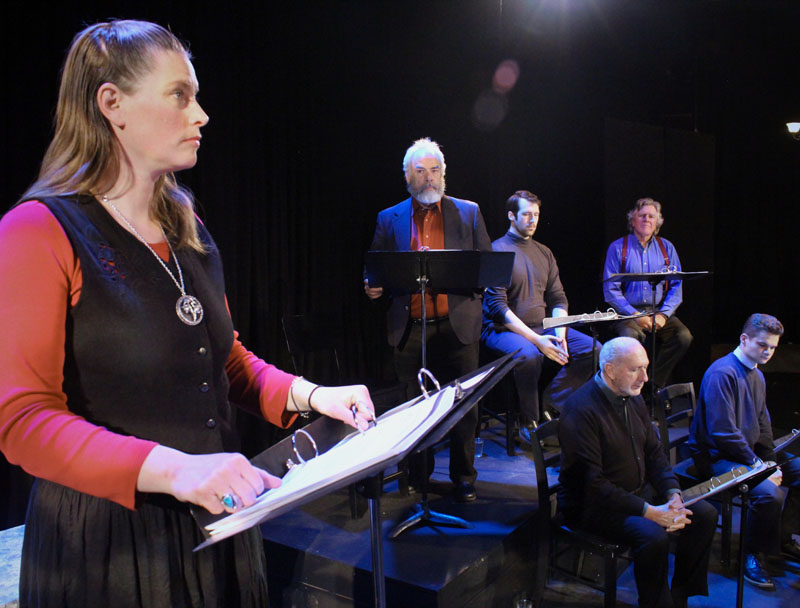 The art of speaking, listening, imagining: “You may choose to listen as opposed to watch.” Those were the words of Griff Braley, Heartwood Regional Theater Company’s artistic director, when he introduced the dramatic staged reading of “Medea” about to begin on the afternoon of Saturday, May 11 in the Parker B. Poe Theater at Lincoln Academy.

It was an intriguing idea, closing one’s eyes at a play, and one which I took Braley up on a number of times during the powerful performance of poet Robinson Jeffers’ adaptation of the classic Greek tragedy “Medea,” written by Euripides.

Starring Whitefield actor Elise Voigt as Medea, the jilted wife of Jason, who was played by local theater gem Joe Lugosch, this staged reading of “Medea” – done without the usual costumes, props, scenery, movement, and gestures one normally associates with theater – relied upon the actors’ voices and the strength and nuances of those voices to deliver thought- and image-provoking lines.

It must be said that all 10 actors in this distinctive production did a fantastic job of conveying meaning and stirring the imaginations of audience members through vocal delivery alone. In addition to Voigt and Lugosch, the cast of “Medea” consisted of Peter Henderson as Creon, Jim Stewart as Aegeus, Millie Gagnon in the role of Nurse, Joseph Cote as Tutor, Lincoln Academy student Jonah Daiute as Slave, and Mary Boothby, Mary Fraser, and Hannah Grady as the Women of Corinth. 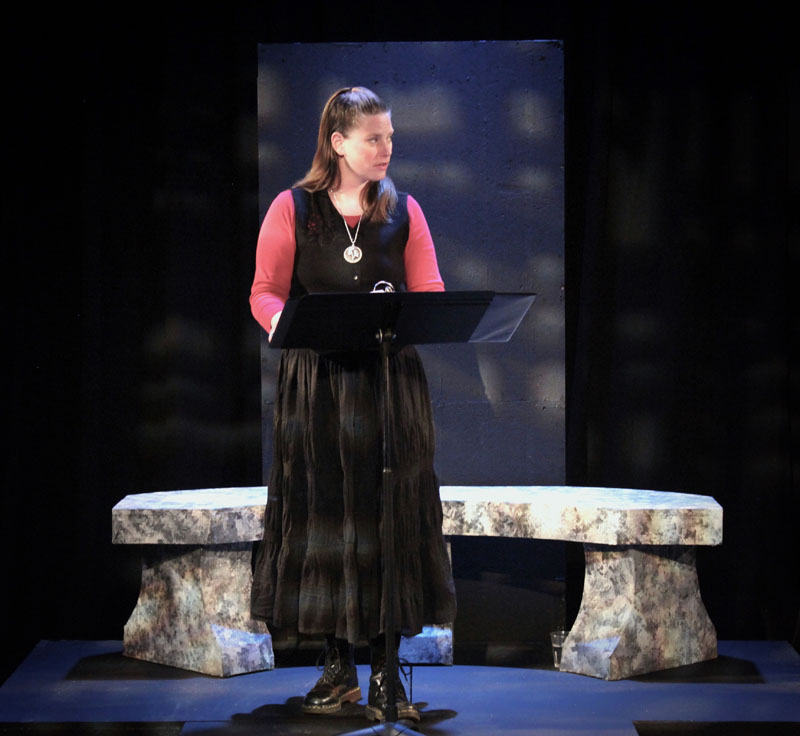 Presenting a play in such a way forces, in a good way, everyone involved to be creative – the actors by using the sheer power, resonance, and artistry of their voices to convey meaning and the audience members to engage their imaginations in picturing the action that the actors describe. Closing one’s eyes adds to the use of one’s imagination, in a similar way that radio shows of old must have done.

The actors in “Medea” obviously had to explore the range of their voices to make decisions ahead of time as to how they would convey certain emotions, thoughts, and images most effectively. Voigt, who has Midcoast-area Shakespearean acting credit under her belt, was particularly effective when she used her voice in a noticeably musical way. Voigt – no surprise – is also an accomplished singer.

Voigt is also a powerhouse when it comes to conveying the negative range of the human experience, including the fringes of madness.

It was really nice to hear the “Medea” actors speak slowly and pronounce their words clearly, a refreshing change from what is often the chaos of bits and pieces of sometimes partly unintelligible sentences and thoughts that get flung at one from various sources on a daily basis. Heartwood’s production of “Medea” revered language as an important tool for communicating effectively – ideas, images, and emotions – and I appreciate that.

This type of theater is intense. It draws one in with a distilled seriousness not often encountered in one’s day-to-day world. Intensely delivered speech about intensely felt human emotions – anger, love, desire for revenge – may not be for kids, but as a society, we should be glad someone is willing to offer such an experience on occasion. It reminds one that life is more than just the latest video game or the next piece of pepperoni pizza and a soda – though it is that, too.

Next up, Heartwood offers Pedro Calderon de la Barca’s “Life Is a Dream,” running June 27-30 in the Parker B. Poe Theater at Lincoln Academy in Newcastle. Learn more at heartwoodtheater.org.