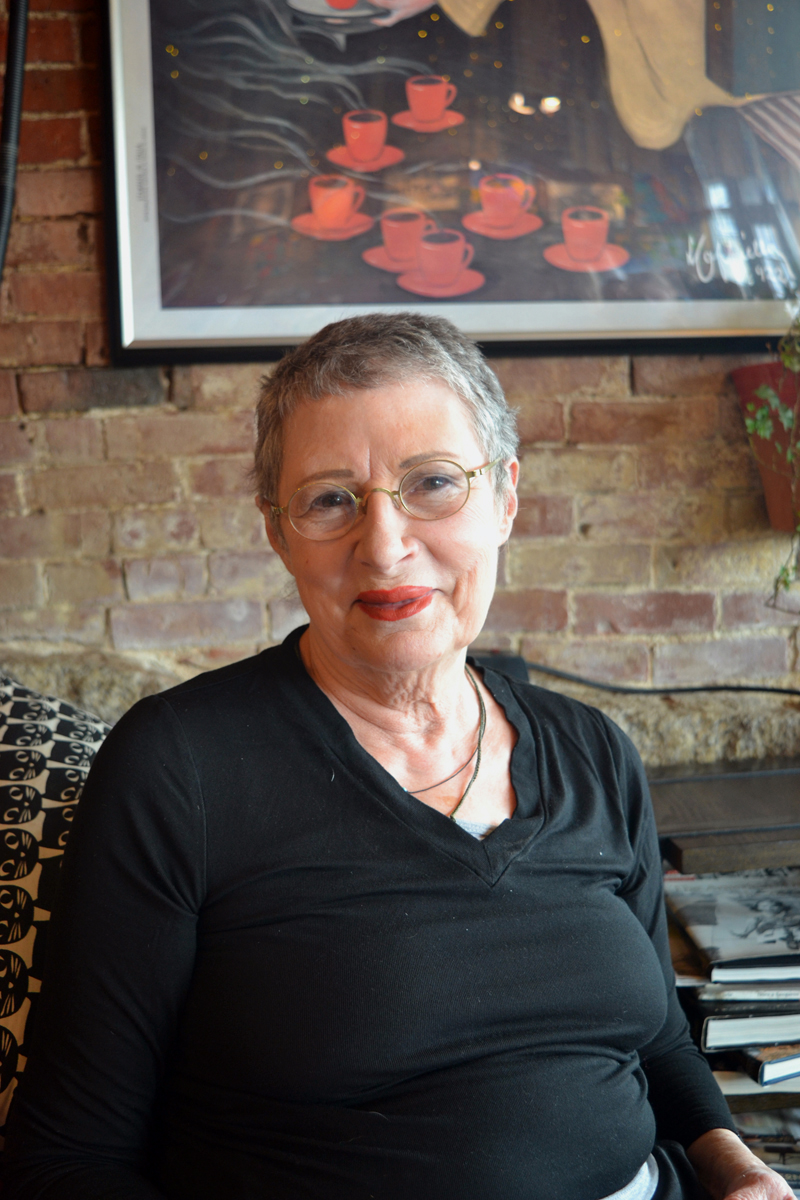 Hangin’ with the Hulk’s mom: Last Friday, May 24, my colleague here at the LCN, Kathy Lizotte, tipped me off to the buzz going around Facebook, namely that abstract painter Marie Rose Ruffalo has an art exhibit on the walls of Red Cup Coffee House in Boothbay Harbor.

That’s a pretty big deal, because in addition to the fact that Ruffalo’s art is nice to look at and it’s hanging at a place that’s nice to hang out at, Ruffalo happens to be the mother of Mark Ruffalo, whose film credit includes being the Hulk in the “Avengers” movies, and roles in many other films, including the cool 2004 movie “Eternal Sunshine of the Spotless Mind,” starring Jim Carrey and Kate Winslet.

So, of course, I hopped in my car and drove to Boothbay Harbor, intending to view Marie Rose Ruffalo’s art and write about it. Little did I know that once I got there, the owners of Red Cup Coffee House, Daniel and Silvia Campbell, would graciously insist on calling her and asking her if she could come down to their cafe to talk with me.

I ended up perusing Ruffalo’s paintings and pen-and-ink pieces, having an awesome sandwich, and chatting with Ruffalo, a very lovely and soft-spoken person, on a comfy cafe couch. Ruffalo oozes genuine kindness and sweetness. So refreshing!

Ruffalo moved to Maine from San Diego six years ago with her husband, Jerry Hull, “so I can paint,” she told me. While Ruffalo has painted “for years,” the former hair designer’s Red Cup show is her first show and her interview with me was her first interview.

“People say ‘Did you move here to retire?’” Ruffalo said. “Well, no, I moved here to work on my art and put it out to the public.

“Everything here is nautical and my art is so different – and I never thought it would go over actually. But it has, and thanks to this wonderful couple that owns this coffee shop. They have been very instrumental in getting me to display my artwork.”

When I commented that my favorite one of her pieces is the one with the lone pink-and-white square “hiding” in an abstract field of loosely formed black squares with traces of white overlay, Ruffalo said, “Oh, its title is ‘La Coeur du Probleme’ (translation: ‘the heart of the problem’), but I call it ‘Hope.’ Everyone says it looks like hope because it’s dark and there’s a nice blob of pink to show that in darkness, and when life can get dark and difficult, it can always get better.”

Ruffalo speaks from hard-earned experience. Her son Scott Ruffalo was murdered in Beverly Hills in 2008.

“I have a lot of it,” said Ruffalo of her artwork. “I have been doing it forever, but also having to work while I was doing it. In 1997 was when I really dug in.”

“One of the things I really like to do is get depth,” Ruffalo said of her varied use of the harlequin pattern. “When I look at it, I want to see depth.”

Besides talking art, we chatted briefly about why we both left the state of California for less-populated and more wild and rugged Maine, agreeing that California is basically “over-everything-ed” – overpopulated, overpolluted, too much crime, too much traffic, too much going on, not all so great.

So, OK, the obvious question: “Has Mark been to Boothbay Harbor?”

“Yes. He likes it. But a lot of people haven’t even heard of him here. A lot of people here don’t watch TV or go to the movies. They read. They check out five books at the library and read them all in a week! People ask me, ‘Well, what was he in??’

“It’s weird having a child doing that kind of work, in a way.”

Learn more about Ruffalo’s prolific output of artwork at marieroseruffalo.com. Ruffalo’s exhibit will be on the walls of Red Cup Coffee House, 29 Commercial St., Boothbay Harbor, through Wednesday, July 31.