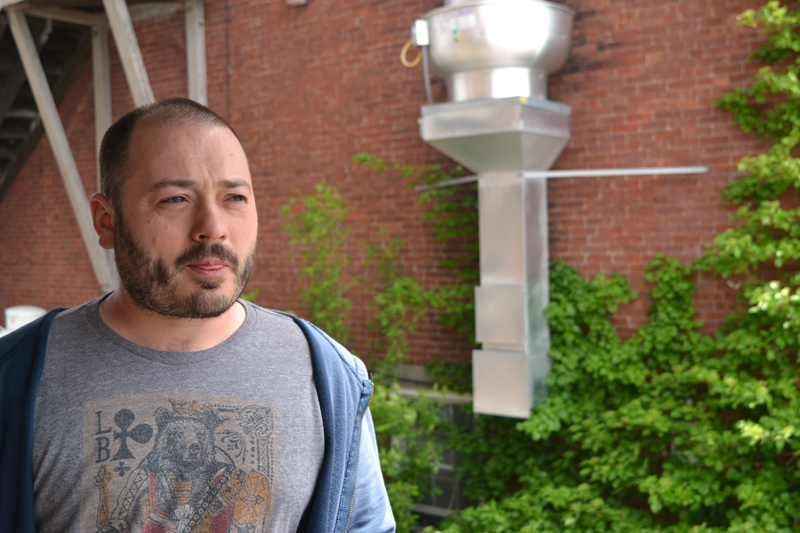 Renaissance man (and fiddle-playing leprechaun): Damon Leibert has been the technical director at Lincoln Theater in Damariscotta since September 2017. As such, he is the go-to man for making sure the nuts and bolts of the building – lights, windows, toilets, and so on – are in order. He is also responsible for such things as creating the beautiful stained glass projections used in LCCT’s recent production of “Sister Act” at the theater. 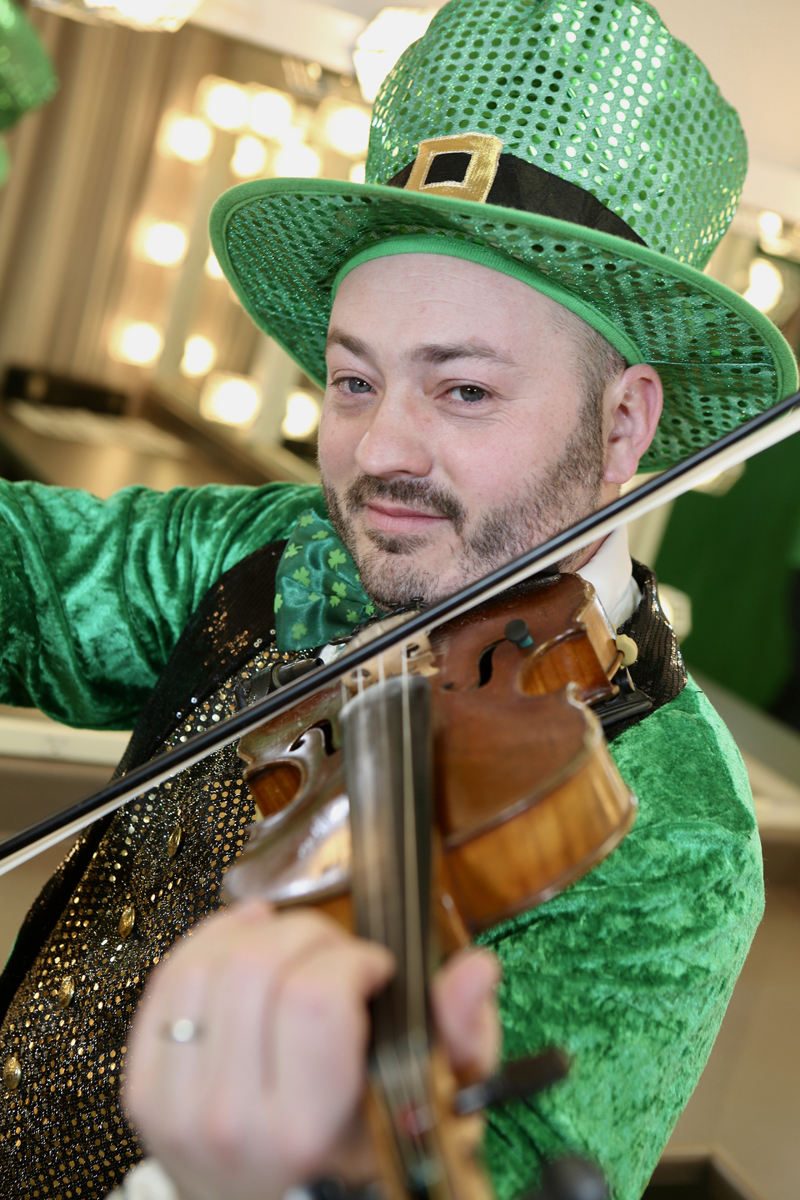 As Andrew Fenniman, the theater’s executive director, put it, “He has a big job. Not only is he responsible for the care and maintenance of the facility, he is in charge of all the technical aspects – lights, sound, sets, etc. – of our live productions. And more.”

Leibert has a lengthy and eclectic resume that also includes being a highly accomplished and successful fiddle playe r in the Boston area and beyond (he has performed with the likes of, among others, the late iconic musician Levon Helm, of The Band fame), heading up an audiovisual business called Live Art Technologies, and serving as the managing director of The Rockwell theater in Somerville, Mass.

Leibert, who was born in Connecticut and raised in a small fishing village in Nova Scotia, has been playing the fiddle since he was a kid. His father, Peter Leibert, plays the button accordion and is known as one of the first traditional English Morris dancers in the U.S.

Leibert, who moved to Boothbay from Massachusetts in 2017 with his wife, painter Madelyn Mann, is also a member, since 2012, of The Irish Comedy Tour, theirishcomedytour.com. It is a nationally touring show “which features music, story, comedy, and is typically set in proscenium theaters,” as Leibert described it when he first introduced himself to me in an email.

And that’s my very long introduction to get to what I want to focus on in this column: Leibert as comedy troupe member – or, rather, as a fiddle-playing leprechaun in a sequined Kelly-green outfit, to be more exact.

“It’s like an Irish pub and a comedy show in a food processor,” Leibert told me of the 60-minute video that features footage from the funny, entertaining live show as well as candid footage of the troupe members – Leibert, Derrick Keane, Mike “The Comedy Barbarian” McCarthy, and Derek Richards – goofing around and chatting backstage and on the road.

Leibert’s job in the touring show – which hit the states of Washington, Montana, Florida, New York, Connecticut, and Massachusetts earlier this year — is to jump on and off the stage in his dazzling get-up, fiddle in hand, and play. “I run while I play,” he said.

Leibert characterizes The Irish Comedy Tour as “a comedy show that’s essentially packaged for Las Vegas – with a cultural component.” In addition to Irish-American comedy, that cultural component sometimes includes Irish stepdancers. And it always includes a fiddle-playing leprechaun. 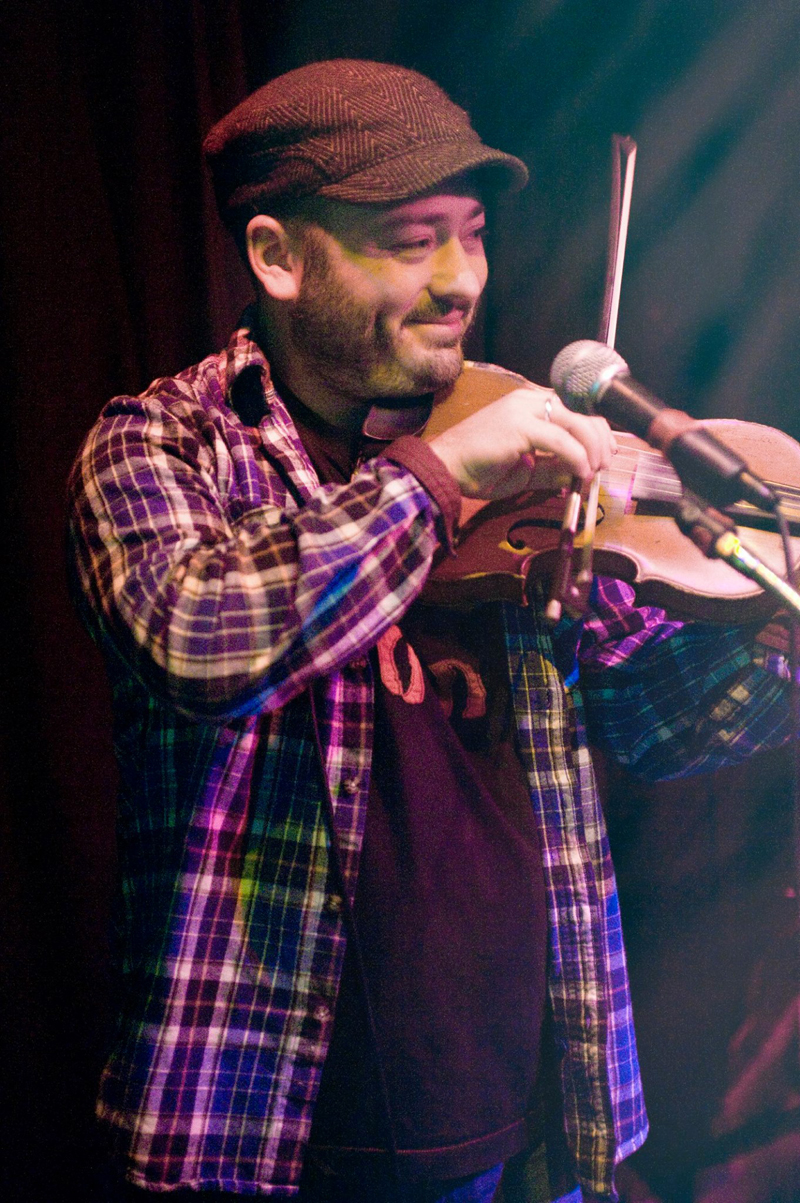 “There’s a place in (Irish) culture for a leprechaun,” Leibert noted, adding that “in America, we tend to commercialize everything,” green beer on St. Patrick’s Day being a good example. Leibert’s character in the show straddles the line between the traditional view of a leprechaun as a part of Irish folklore and the more commercialized version in the U.S., largely detached from tradition and focused on fun.

The show, he said, plays equally well to American audiences, to Irish-Americans, and in Irish cultural centers around the U.S. “It doesn’t matter where you’re from, you’ll have a laugh,” he said. “We just work well together, like a bunch of kids out on the road.”

Leibert said he still basically operates under the radar here in Lincoln County. People don’t recognize him on the street as a working musician like they used to in Massachusetts. “I frequently have a beer at King Eider’s,” he said. “People don’t know me here, unlike in Boston … I’d be happy to play music here – I just don’t have the connections yet. Here, I’m just a random guy.”

“I joke with everybody that I moved here to retire,” said Leibert, who is 40.

Uh, no. Not anytime soon.

Learn more about Leibert at fiddler.net. Watch a trailer of the comedy special here: youtube.com/watch?v=5aLkuc532dY&feature=youtu.be.