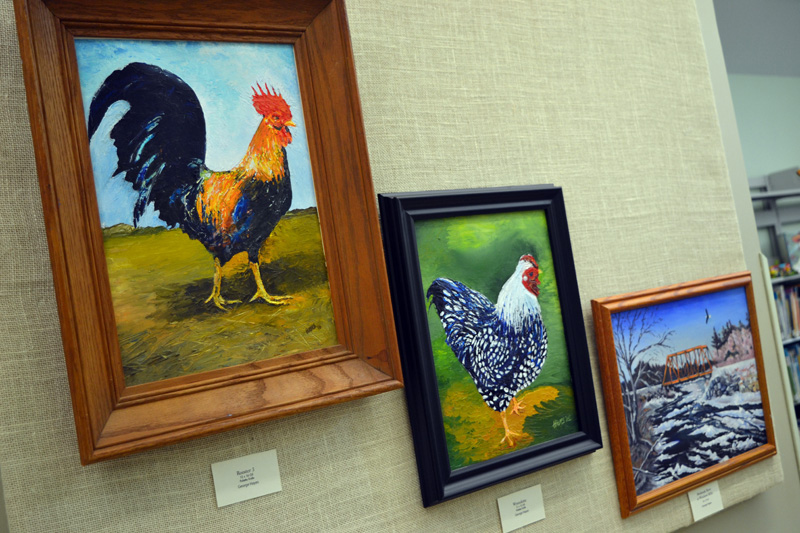 Rural beauty in Waldoboro show: There is a nice little art exhibit up at the Waldoboro Public Library through the end of September, featuring the pastel, oil, and acrylic work of Waldoboro artist George Hayes. Hayes is a former technical illustrator and graphic designer who studied painting and drawing at New York’s Wallkill River School of Art.

With the exception of two portraits in oil of women titled “Alana” and “Stephanie,” Hayes’ work in the library show focuses on the rural outdoors, from colorful chicken portraits painted with a palette knife to atmospheric landscapes.

Hayes’ pastel piece titled “Dancing Trees” hangs above an interesting oil painting of what appears to be a boy deep in thought sitting in the shadowy doorway of an old wooden building. Its title, simply “?,” adds to the mystery evoked by the piece. “Harvest Moon with Barn Owl,” an acrylic painting of an owl in flight against a backdrop of black sky and an orange moon, has a similarly mysterious quality. 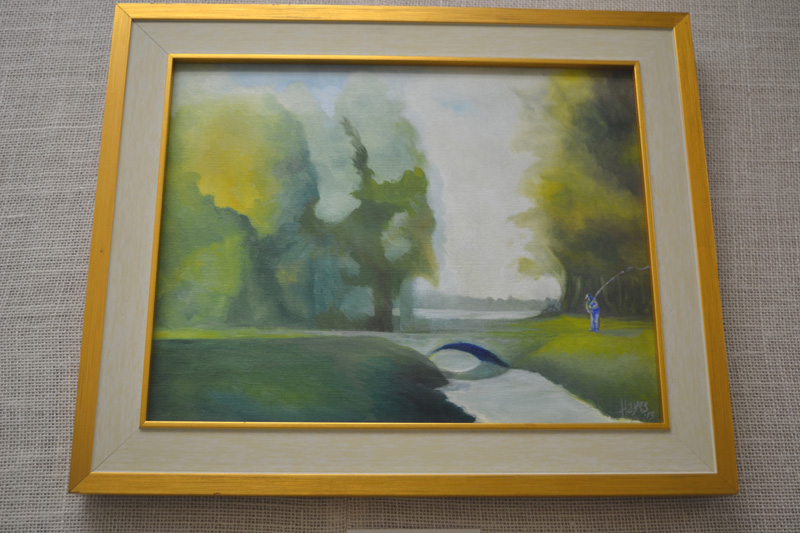 “Trout Stream,” one of the paintings in the current George Hayes exhibit at the Waldoboro Public Library. (Christine LaPado-Breglia photo)

Across the hallway from these pieces hangs “Trout Stream,” a particularly lovely landscape painting in oil. Its partially abstract trees, in green, light blue, and yellow, resemble clouds in their fluffiness, a nice touch against a cloudless sky. Nearby hang two other striking pieces, the pastel “Pierson’s Barn” and the small oil painting “Pine on Hill,” essentially a portrait of a somewhat-abstract clump of dark-green pine trees on a hill in lime-green and yellow.

“Growing up in rural Pennsylvania influenced my love of nature. I enjoy the experience of plein air (outdoor) painting and the commune with nature that it brings,” says Hayes in the artist statement that accompanies his exhibit. “Color is an exciting way for me to express and preserve my views of the local surroundings, and I especially like the impressionistic style of painting which I attempt to use when painting in oils or pastels.”

Hayes’ artist statement also mentions that he and his wife, Carol, are recent transplants to Waldoboro, having moved there in November of last year. Hayes paints with the Medomak Plein Air Painters and has exhibited locally at Medomak Arts in Waldoboro and River Arts in Damariscotta. 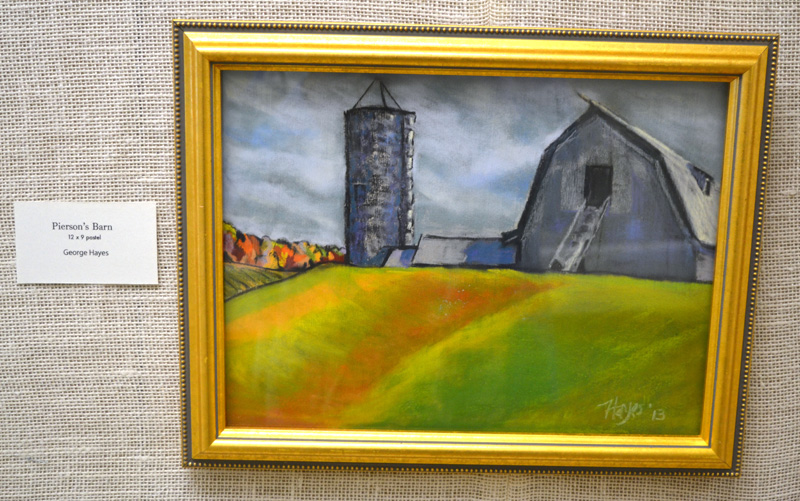 “Neighborhood Potter” on LCTV: I just wanted to make sure that readers are aware that the very likable and talented Liz Proffetty, of local Neighborhood Clay and Liz Proffetty Ceramics fame, has a show on Lobster Coast Television – aka LCTV – called “The Neighborhood Potter.” Since late April, Proffetty has been filming highly informative 30-minute shows on the ins and outs of the art of ceramics, beginning with show No. 1, “Introduction and Throwing a Mug,” which is followed by show No. 2, filmed May 3, “Throwing a Bowl.” (“Throwing,” for the uninitiated, means making a clay vessel on a pottery wheel, not literally throwing it.)

At the time of this writing, Proffetty has 16 shows under her belt, all of them available to watch at lctv.org/category/community/arts. One of them, “Clay and Art Therapy,” features the equally talented and interesting Malley Weber, of Hallowell Clay Works.