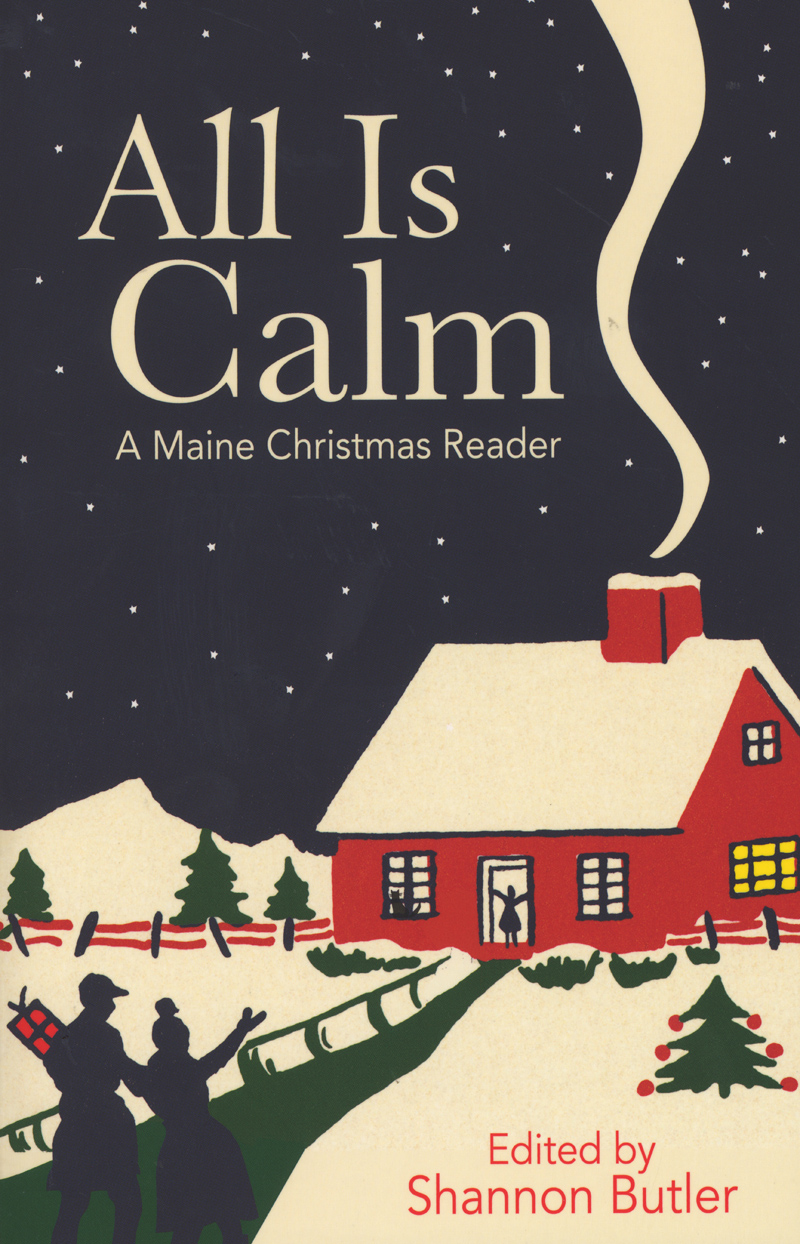 “All is Calm: A Maine Christmas Reader,” newly released by Islandport Press, includes an essay by Round Pond writer May B. Davidson.

Local author in new Christmas anthology: Anyone who has ever read May B. Davidson’s long-running Lincoln County News column “Lower Round Pond” – which became “No Longer Lower Round Pond” for a number of years until her recent move back to Round Pond – knows what a talented, entertaining, and passionate writer she is. In fact, Yarmouth’s Islandport Press not too long ago discovered the joys of Davidson’s writing and liked it so much it published her memoir, “Whatever It Takes: Seven Decades of True Love, Hard Work, and No Regrets,” in June.

One of Davidson’s essays, “Christmas in a One-Room School,” has been included in a brand-new anthology titled “All is Calm: A Maine Christmas Reader,” edited by Shannon Butler and published in early November by Islandport Press. “All is Calm” offers 40 pieces about Christmas in Maine, ranging in date from 1863 to Shawn Callahan’s 2019 poem “Unwrapping.”  Davidson’s enthralling piece looks back on the year 1934, when she attended school in a one-room schoolhouse in Bremen.

“Our ‘school bus’ was an old, tired, wood-sided ‘Beech Wagon,’” she writes. “Its Isinglass windows had long since cracked and blown away. We were kept from freezing in winter by a huge, thickly furred buffalo hide over our knees.”

Another gem from the same essay: “Another break we favored was when the Ipana Toothpaste salesman came to visit the school and distributed small samples of the yellow tubes with red stripes that converged on the center. When his lecture about dental health was finished, and he left, we squeezed the toothpaste out and ate it with gusto since candy was not affordable in this era of the 1930s. It was vaguely sweet and minty.”

I don’t want to give any more of Davidson’s piece away. I highly recommend you read it.

Here’s another striking extract from “All is Calm,” to whet your appetite for an enjoyable, cozy read:

From the Prelude essay, “The Glory of Maine at Yuletide,” by John N. Cole: “Here in Maine, winter has arrived – a genuine winter, cold, keen, cutting, and pure, a winter whose 1607 counterpart inflicted chill and miseries on the Popham band, a winter whose definitions are never in doubt. It is thought in other places that Maine winters make Christmas a burden; life here is evidently still equated with those primitive realities of nearly four centuries back. But those who make such distant judgments do not know this state and are the lesser for it. …

“I have, from time to time, wished that every cynic, that every discouraged and jaded citizen beyond Maine’s borders could somehow be brought here for a while. It would be a great gift to them to be allowed to have Christmas in Maine, to know the truth of cold, to comprehend the blessings of the solstice, to see the gulls’ white banners unfurled over the evergreens, to skate on a black pond frozen silver in the moonlight, to witness the modesty of the state’s Main Streets as they take the season in their stride.”

Yet another interesting read is “Christmas on the Lightship,” by Hal Cram, a story from 1925 about spending Christmas on the lightship called Portland No. 76. While the word “lightship” might evoke some futuristic method of travel, a lightship actually was, as Butler points out, “a ship that acted as a lighthouse in areas where lighthouses couldn’t be built. They were moored in places deemed dangerous for passing ships and were equipped with lights and sounds to warn approaching sailors of hazards.”

From “Christmas in Good Old Aroostook,” by Eva M. Furbush, from 1915: “Automobiles are pretty fine, but they have not yet invented one that will produce a thrill like the good old sleigh of olden days. When they get one that will slide along over the crusty snow with a jingle of merry bells, why then they will have invented something worthwhile.”

Butler, who grew up in Aroostook County, writes in her Editor’s Note: “It’s easy to poke fun at Mainers for their stubborn nature and resistance to change, but why would we ever want to change? With abounding natural beauty, and our village of a million citizens, why would we ever feel the need to bend to the whims of time? We allow only the progress necessary to continue in this modern world but concede none of the traditions that make up our essence.”

“All is Calm,” which costs $16.95, is available at islandportpress.com/all-is-calm.html and at Sherman’s Maine Coast Book Shop, 158 Main St., Damariscotta.