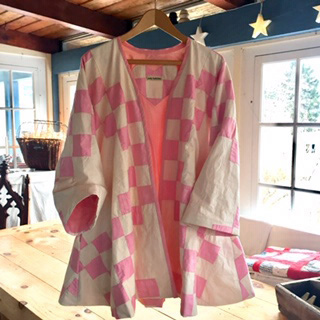 Textile artist to the rescue: This is the story of how an old quilt was rescued and transformed into a beautiful coat. More specifically, this is the story of how a woman named Mary Lavandier Myers bought a $3 bag of rummage sale items at the Miles Memorial Hospital League tent sale in Damariscotta earlier this fall into which was stuffed a pink-and-white quilt that was worn out and stained, and gave the quilt to her textile artist friend Jody Halliday to do her magic on. The result: a lovely (and virtually spotless) “art jacket.” 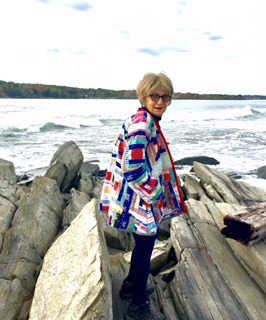 Myers, who lives on Peaks Island in Casco Bay, called me in early December, excited to tell me of what Halliday had accomplished. More than once she expressed her amazement that not only had Halliday turned the cast-off quilt into a wearable and functional piece of art, but she had managed to remove what appeared to be a number of rust stains that seemed impossible to get out.

I called Halliday, who also lives on Peaks Island, to talk with her.

Halliday, until her recent foray into making jackets from rescued quilts, has been known for the past decade for her bleached denim jackets and “Connie” bags. A look at her Jody Halliday Wearable Art Facebook page reveals numerous photographs of Halliday’s artful handbags and denim jackets, embellished with what she told me is “sashiko” and “boro” stitching, decorative types of Japanese mending.

The pink-and-white jacket is the second quilt coat Halliday has made. The first one she created from a quilt she bought six months ago at a yard sale on Peaks Island.

Inspired by jacket No. 1, she had told Myers, “If you find any old quilts …”

Sure enough, Myers popped up with the one she picked up in Damariscotta. “Mary said, ‘I’ve got a great quilt for you, a vintage 1930s. There are stains on it,’” Halliday told me. Halliday said she soaked the quilt overnight in Woolite, and “bleached” it outside in the sun the following day. The few remaining stains she cleverly hid on the inside of the jacket beneath a lining. 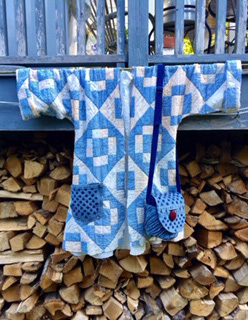 Halliday said she loves the fact that the jacket has a warm “patina” that comes from being made from a repurposed old quilt: “It’s the patina – the patina of things, the story of one’s life.”

“It’s ‘wabi sabi,’” she said, referencing the Japanese aesthetic that refers to beauty that is imperfect or incomplete. “You’re just appreciating that (the quilt) was worn, that’s it’s old, and that it was loved.”

“I like art,” she added of her love of making art that is wearable, “but I’m a New Englander – there’s got to be some practicality to it.”

Halliday has been invited to do a pop-up show in Brooklyn, N.Y. for Mother’s Day, where the Damariscotta-acquired-quilt-turned-coat will travel along with other wearable textile pieces Halliday will offer for sale. She also has work at the Maine Craft Gallery in Portland, the Handworks Gallery in Blue Hill, and the Gem Gallery, a cooperative gallery on Peaks Island.