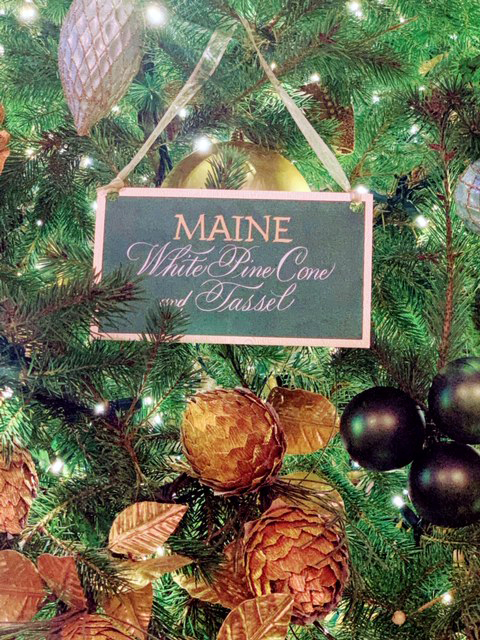 Maine’s state flower is represented alongside the state flowers of the other 49 states on the official White House Christmas tree. (Photo courtesy Shirley McLaren)

The art of decorating the White House for Christmas: Of the 8,000-plus people from 50 U.S. states who applied for the job of volunteer decorator at the White House this past Christmas season, only 225 people (from all 50 states) were chosen. Among them was Shirley McLaren, a retired nurse from Waldoboro, who traveled to Washington, D.C. for the period of Nov. 25-27 to help decorate dozens of Christmas trees with more than 2,500 strings of lights, among other things that she did.

“I was helping put lights on trees,” McLaren said in a recent interview at Moody’s Diner, explaining the thorough, time-consuming process she had to go through to decorate each tree for the lavish Christmas display throughout the White House.

“I had to start from the trunk of the tree and wrap the trunk with lights, and then wrap out to the end of each branch and back again to the trunk,” she explained. “My hands were black from the pitch. …

“It was hard work. We lost 10 people after the first day. It was like being back in nursing when I did 12-hour shifts,” McLaren said, smiling, of the 10-hour days she put in. “My eyes just cross when I think about all the lights on all those trees.”

In addition to decorating approximately 50 Christmas trees with lights, she worked in the White House warehouse where all of the ornaments are kept. “Everyone did a warehouse duty,” McLaren said. Hers was helping to get countless ornaments out of boxes and taking off “500 million bows,” as she put it, from last year’s decorations and replacing them with bows reflecting the White House’s 2019 Christmas theme, “The Spirit of America.” The bow switch-out included cutting V-shaped notches into ends of ribbons – this year’s bow-finishing style, versus last year’s, which involved a diagonal cut at the ends of the ribbons on each bow.

“The ends of the ribbons had to be cut specifically different from last year,” McLaren said.

After stacking all of the boxes containing the renovated ornaments, labeled for the various locations for which they were destined – the Blue Room, the Red Room, the Vermeil Room, and so on – “a Secret Service person with a dog sniffed every box to make sure there was nothing (dangerous) in it,” McLaren said.

What was McLaren’s favorite thing about her time as a volunteer decorator? “Truly, just walking around the White House, the East Wing, looking at all the photos,” she said.

McLaren followed up her decorating stint with a trip back to the nation’s capital on Dec. 2 for a recognition buffet for all of the volunteers. “I wasn’t going to miss out on anything,” she said.

Would she do it all again?

“Oh, yeah! In a heartbeat!” she said. “The whole thing was cool. But I was exhausted!”