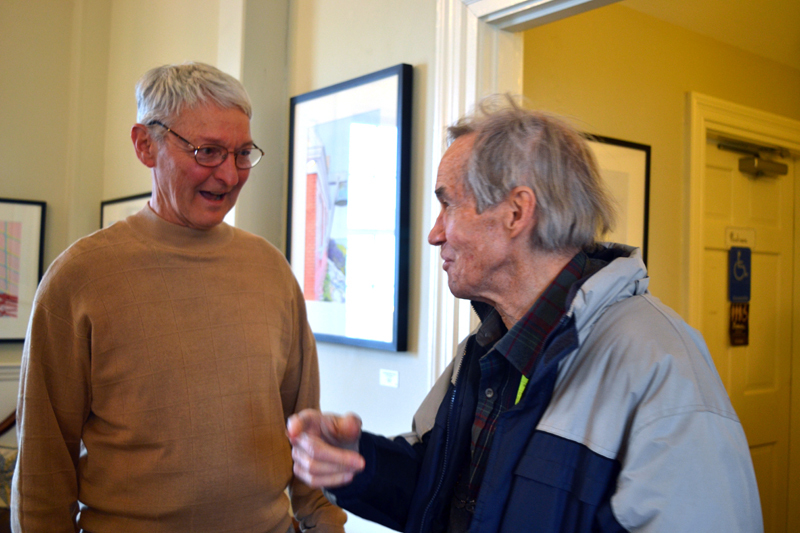 Damariscotta watercolorist Paul Sherman (left) greets one of his fans at the April 21 opening reception for his art show at Savory Maine. (Christine LaPado-Breglia photo)

Watercolor mosaicist: “He’s got all these little islands of color that you can only see up close, but from a distance they make up a cohesive picture.” Those are the words of local painter Polly Steadman, gushing over the work of Damariscotta watercolor artist Paul Sherman at the well-attended April 21 opening reception for Sherman’s show currently on the walls of Savory Maine Dining & Provisions, 11 Water St., Damariscotta.

“And it’s meticulous!” added Steadman admiringly, singling out Sherman’s impressive “Glass Doorknob with Light.” “I would never dream of being that meticulous!”

Steadman’s beautiful work ranges from the realistic, such as a late-1980s piece titled “Garlic Braid,” to the not-as-realistic newer pieces. His very recent “Purpose II” reworks his earlier “Purpose I” and features his now-signature, mosaic-like technique of painting combined with his newer addition of black outlining to highlight borders between components of the painting. “Purpose II,” painted just four weeks ago, is striking; Steadman’s latest evolution in his technique is eye-catching and excellent. 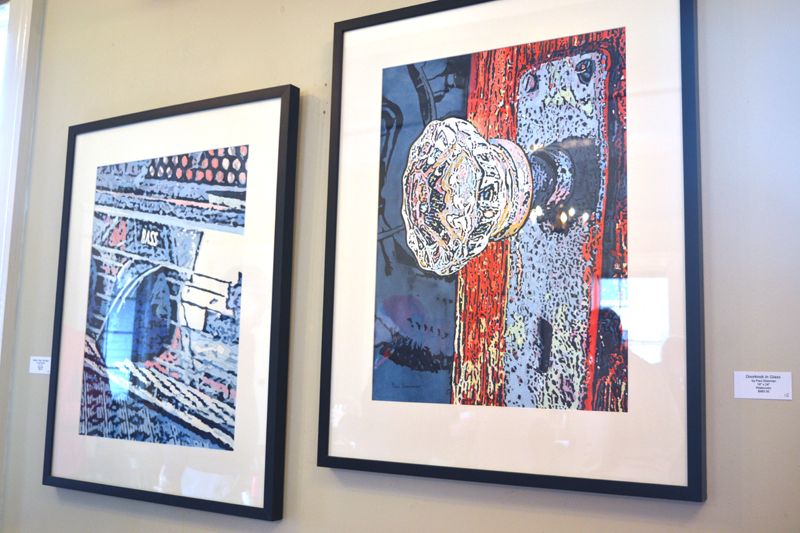 Sherman’s former neighbors, Tom and Susie Shevenell, of New Hampshire, chatted with me about the pleasing evolution of Sherman’s painting. The Shevenells said they have known Sherman since 1984, when they lived next door to each other in Boothbay. They remember when he painted “Garlic Braid.”

Susie Shevenell said that she was “stunned” at Sherman’s development as an artist. “We’ve been watching him do doorknobs since we met him,” she said, referring to his striking, detailed paintings of glass doorknobs. She described his latest work as a “quantum leap” over what he was doing earlier in his career. His journey from excellent realistic paintings to his current abstract-realistic style has definitely paid off.

Sherman took a break from greeting guests to tell me how he came to add the black borders in his latest work. He simply got into a drawer of black ink that he had gotten at a yard sale and decided to use it. He said he broke all the rules of watercolor painting by putting the indelible black ink on the paper first, making certain there is no going back after that – no erasing, no watering down of the medium. “The black goes on first,” he said. “It’s stunning how much more fun it is after that. Now, the drawing is shouting at me.” He becomes “committed” to the ink lines, he said, which dictate the direction of the piece.

Sherman’s work is must-see stuff. His engaging show runs through Monday, May 22. 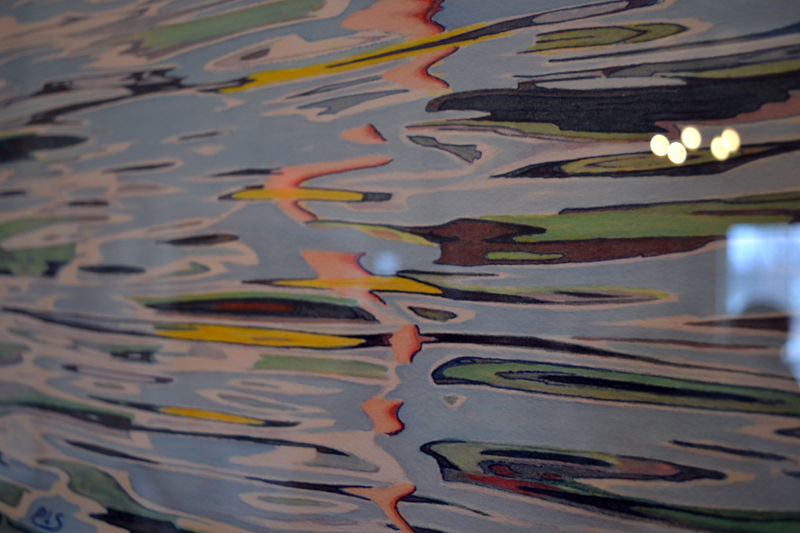 Knit and sip: Buzz Maine, the great little cafe at 133 Main St. in Damariscotta, is hosting wine-and-knitting sessions on Wednesdays from 5-6:30 p.m. Drop in with your yarn and needles, and have a glass of wine and chat with like-minded folks. Crocheters, I am told, are welcome, too!