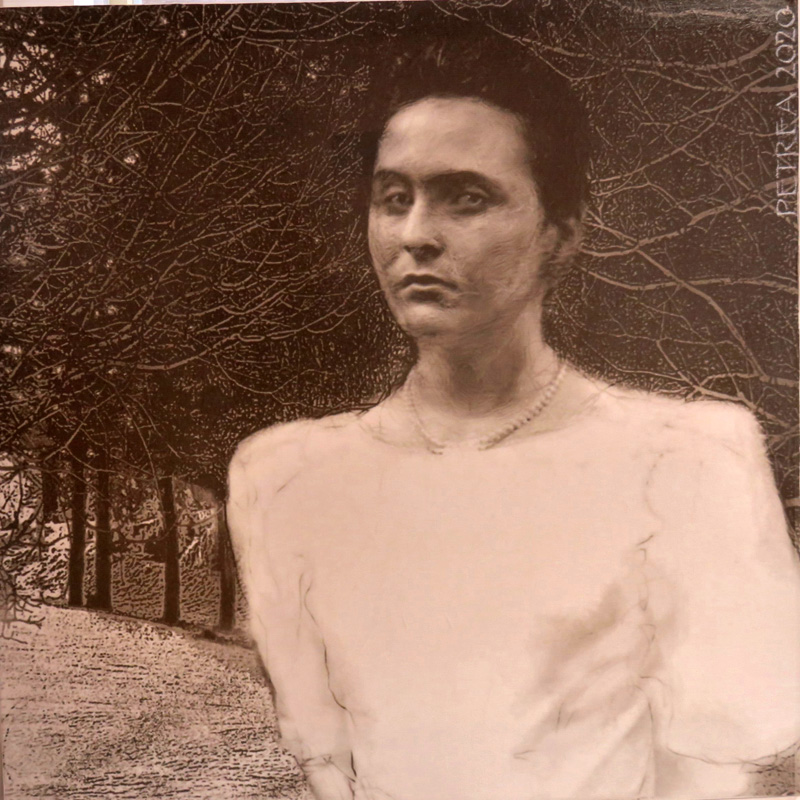 Impact in black and white: Petrea Noyes’ large, black-and-white mixed media piece called “String of Pearls” is one of the first pieces that greets visitors to the “Black and White” show currently on the walls of the main gallery at Damariscotta’s River Arts gallery. It is imposing – partly for its size, but mostly for its subject matter, a woman with a vaguely unsettling look standing alone before a group of trees at a time of day difficult to pinpoint. The time period in which the woman might have lived is also impossible to say, which adds to the piece’s mystery and allure.

Add to that the fact that the woman in this wonderful, glossy creation has those eyes that seem to follow one everywhere, and that Noyes, true to form, has masterfully combined a number of mediums – paint, ink, photography – to create (as she always seems to do) something entirely unique and fascinating.

“String of Pearls” is rightly placed in a prominent place in this black-and-white-focused show. Ditto for Noyes’ other piece in the show, “Pull,” an equally large, somewhat photographic mixed-media piece of a man rowing a boat, which hangs on the same wall near the gallery’s front door as “String of Pearls.”

I was taken with Judson Pealer’s intriguing, abstract ink-on-watercolor piece “Unraveling and Floating,” with its “leopard-spotted” X-like shapes and squiggly lines similar to what one might see under a microscope. Like Helen Warner, who also has a piece in this show, “Light & Dark,” Pealer seems to take joy in playing with the effects of the nonstandard use of ink.

Stephen Black’s photograph “Between Wharf and Water” nicely resembles an abstract painting, its pilings and reflections like strokes of paint. Whitefield photographer Cory Stafford’s “Solar Minimum” draws one in with his take on trees.

And Sally Stanton’s three pieces in graphite, hanging near Stafford’s photo, are nothing short of delightful — “The Block,” “Ratty,” and “The Emperor & the Waitress” feature wonderfully wacky characters in intriguing groupings.

I have to say, juror Ed McCartan’s inclusion of his own painting, an abstract piece called “River” painted in a number of colors, was disconcerting, especially given its location near the entry to the show. The inclusion and placement of this non-black-and-white piece takes away from the power of the theme of the show, and serves to undercut the impact of the black-and-white pieces that surround it.

I have similar thoughts about the inclusion of the abstract painting “Solstice (Diptych) 2019,” by Damariscotta painter Jaap Eduard Helder, whose work I like very much. The inclusion of “Solstice (Diptych) 2019,” which includes the color blue, makes one wonder, “Why?” instead of just allowing the viewer to enjoy it as one would in a show in which it would not be seen as an outlier.

The “Black and White” show runs through Saturday, Feb. 1. (Wander into River Arts’ cozy West Gallery and take in the current volunteers’ show as well, which happens to feature some nice black-and-white pieces by textile artist C.S. Peterson.)

River Arts is located at 241 Route 1, Damariscotta, and is online at riverartsme.org.