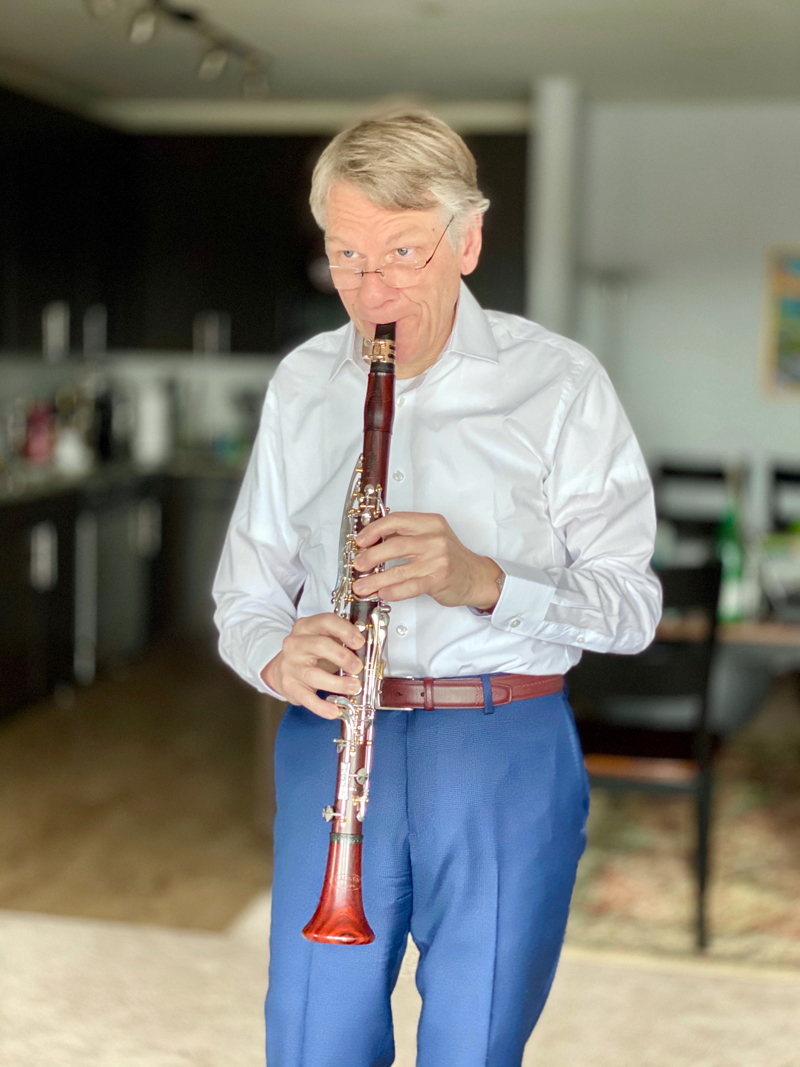 Music’s power to heal: In mid-December, I turned this column over to guest columnist Paul Kando, a local lover of the arts and the writer of the weekly “Energy Matters” column in this paper. Readers will remember Kando’s eloquent words about his inspiring arts education growing up in his native Hungary.

This week, I have given the majority of my column space to Southport musician Marcus Hutchins. (I weigh in on the recently released issue of local teen magazine EPOCH at the end of the column).

Hutchins’ essay on the healing power of music is beautiful and profoundly moving.

It’s hard for me to believe that more than two years have gone by since that remarkable, truly unforgettable Sunday afternoon concert.

I don’t recall any premonition that the gig would turn out as it did. After loading the back of the station wagon with four woodwinds, instrument stands, music, and so forth, I headed up the island toward Route 1. Beth Preston, the musical director of Midcoast Maine’s Tapestry Singers, had invited me to play for their December holiday concert.

At 2:30 p.m., the sun was already fading to the southwest, giving no hint of the stormy Monday a short half-day away. The weather can bring sun, bluster, or blizzard on the 17th of December. One can never be quite certain what to expect, even 24 hours prior, especially when the distance to the Maine coast is measured in feet rather than miles.

But one can predict months, even years, in advance how the mood of our house will be on that day each year: anything but carefree.

After arriving at The Second Congregational Church in Newcastle, I set up my horns and ran through the scales and arpeggios, which usually convince me that I am ready to perform. All seemed as per normal.

Three miles into my drive to the performance I passed Southport’s Decker Cemetery, catching a quick glimpse of Thomas’ grave. Exactly 27 years had passed since our infant son had succumbed to heart failure and moved on to another realm. I suppose I should have felt more gratitude for the two weeks we did have with him.

Maybe we need to celebrate the Festival of Lights or the birth of the Light of the World to balance the year’s bleakest month, December, when so many dark things seem to occur.

Near the end of a much earlier December, back in 1944, American writer Kurt Vonnegut and 50 other fellow soldiers were captured during the Battle of the Bulge and imprisoned on the outskirts of Dresden. Two months later the entire city was leveled by Allied bombings. The civilian death toll was approximated at 25,000. Miraculously, Vonnegut survived. But the unimaginable horror took from him a piece of his soul.

Life can do that in one way or another to each of us. A piece of my soul was lost for a time when Thomas passed.

As is my custom on the way to musical gigs, I had said a silent prayer that the musicians would be inspired beyond their abilities, that the audience would feel edified, that joy and peace would touch their hearts.

At precisely 4 p.m., the Tapestry Singers filed into the sanctuary, having executed their own warmups in the lower level of the church. They stood on the risers ready for the downbeat of the first number, “Gideon,” from Stephen Paulus’ “Canticum Novum.” As we sang and played, did I perhaps have a sense that my prayer to God in the car had been heard?

Kurt Vonnegut had come out of his World War II experience committed to the notion that no god would allow such atrocities. No. There could be no God. But some thoughts are temporary.

Perhaps a prayer had been uttered somewhere, sometime, by someone on his behalf.

Not many years later, Vonnegut was listening to his and my preferred music, jazz. That day, the music stirred his inner heart. Feelings of peace and perfect joy filled his being. With the honest intellect of a true artist, he reasoned that these feelings could not have come from himself. They must have been bestowed by someone on a higher plane … by God.

Decades later, as death was approaching, he wrote, “If I should ever die, God forbid, let this be my epitaph: ‘The only proof he needed for the existence of God was music.’”

The Tapestry concert continued with three more movements from “Canticum Novum.” The gig was a welcome respite from the depression this day annually provides. For nearly half an hour I forgot that fateful evening in 1990 when a kind nurse had been given the thankless task of informing my wife and me that our Thomas had suffered a fatal heart attack.

In a very real way, it was a miracle that I was performing with Tapestry. Nine years earlier I had shattered my right shoulder in a cycling crash. Three years, eight surgeries, and three shoulder replacements later I was left with limited mobility and an incurable infection. If I had wanted to understand the term “lifetime suppression,” I would have attended med school!

Somewhere along the way, depression must have set in. I gave up cycling. Music fell by the wayside. Life turned bland. Six and a half years after my cycling spill – July of 2015 to be exact – the phone rang. John Mulcahy, of LCCT, greeted me. This was not a robocall – a genuine miracle! “Marcus, I am putting on a show, ‘And the World Goes ’Round.’ I need a reed player.”

“I haven’t played in several years. What is involved?”

“The reed book has flute, piccolo, clarinet, alto sax, and soprano sax. Oh, and do you have an alto flute?”

“When does it open?”

Oh boy. John must have run out of options. For some strange reason, I heard myself agree to play the show. John, without knowing it, had snatched me out of a long, dark slide.

Two songs were left to be performed prior to Tapestry’s intermission. I was “tacet” – silent – on these, so I moved to the front row to watch and listen.

As a jazz musician, arranger, and occasional composer, I typically listen to music with my head. That Sunday I opened my heart to really hear Tapestry. As I sat there listening, something inside began to stir. I became aware that our son, Thomas, was at my side. Tears ran down my face. Exquisite joy with a sensation of perfect love and peace came over me.

Little had I anticipated in my preparatory prayer for those in attendance that I would be the recipient of that blessing. The rest of the concert was pure happiness.

As I drove home that evening, the sun had set. Storm clouds were moving in. But nothing could separate me from the spirit of that concert. 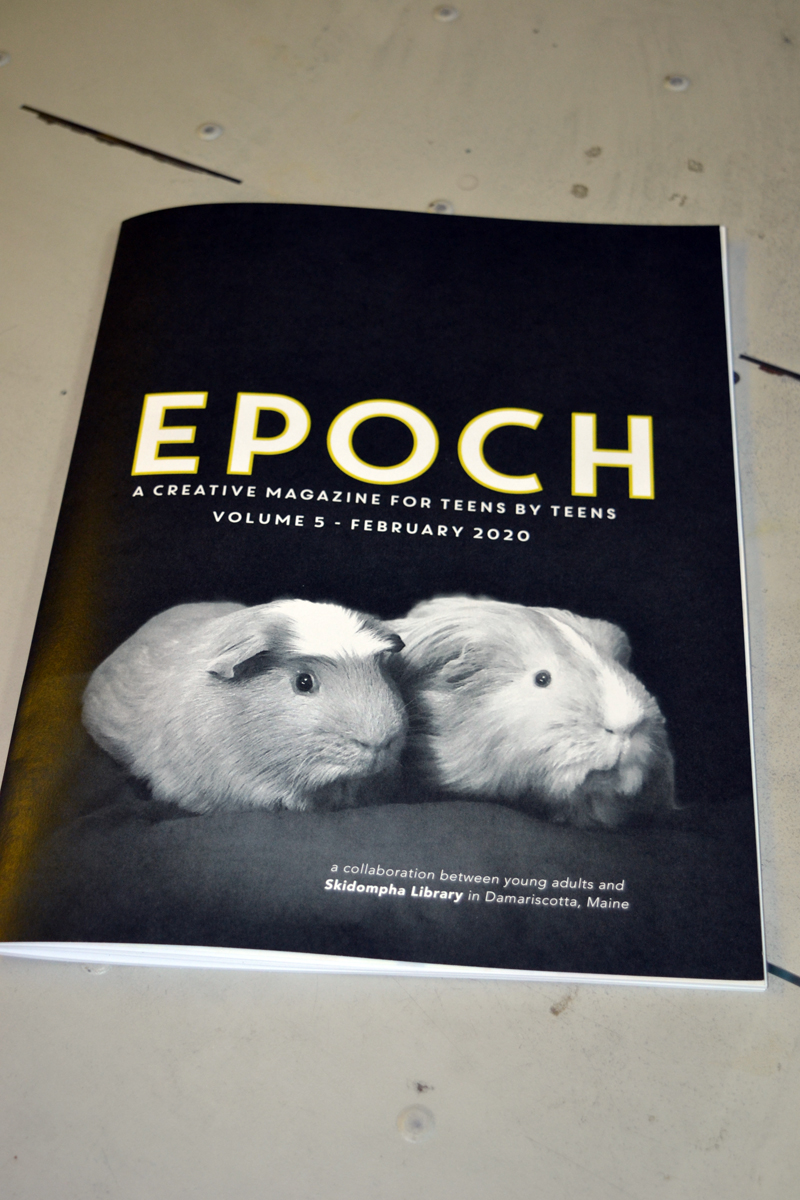 EPOCH at Skidompha: Pick up a copy of the latest issue of EPOCH, the self-described “creative magazine for teens by teens,” at Skidompha Library in downtown Damariscotta. It is free and features poems, stories, photographs, and other artwork by local teenagers from across the county.

And there is much more.

Kudos to all involved with producing this magazine!