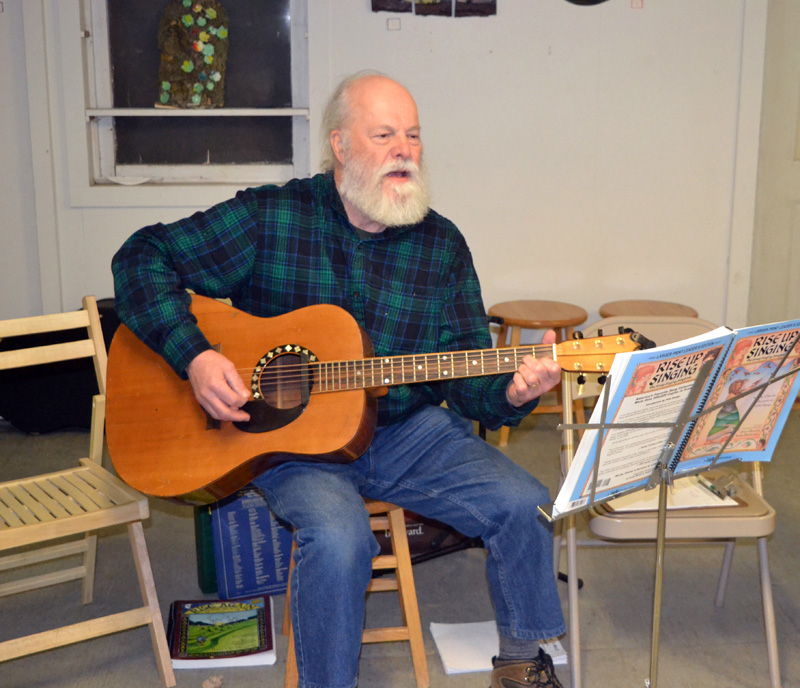 Singing in community: There is a lovely, no-cost event that takes place the fourth Saturday of each month at 6 p.m. at Sheepscot General in Whitefield — a community singing circle. Led by singer-guitarist Dan Townsend, who is a member of local band Well Seasoned, the singing circle, as a recent press release put it, invites “anyone who enjoys singing with others.”

Since I am one of those people that enjoys singing with others, I attended the most recent singing circle on Saturday, Feb. 29. I had heard that the event is always well attended (even standing room only, as I was told by one person), and Saturday was no exception. Slowly but surely, the large circle of chairs set out for attendees filled up. People from as far away as Waldoboro and Westport Island came, some with guitars, most without.

One by one, people took turns choosing songs from one of two songbooks (which Townsend makes available to those who need them) – “Rise Up Singing” and “Rise Again,” filled with hundreds of popular songs, such as “Amazing Grace,” “Let It Be,” “Where Have All the Flowers Gone?,” and “Desperado.”

Townsend opened with the Woody Guthrie classic “This Land Is Your Land.” “We sing all the verses. After all, Woody wrote them all,” Townsend explained, adding that it was the custom at one time to just sing the first three verses, as the following six verses were considered “politically incorrect.”

“Maybe you’ve been working as hard as you’re able

And maybe you’re thinking, was it truth or fable

That this land was made for you and me.”

One man, who had brought a guitar, chose the well-known John Denver song “Take Me Home, Country Roads” when it was his turn to pick a song for the circle to sing. Everyone cheerfully joined in, some singing harmony to the familiar melody.

A woman named Jill chose The Byrds’ “Turn! Turn! Turn!” (also recorded by the late, iconic folk singer and activist Pete Seeger, who wrote the introduction to “Rise Up Singing.”)

The singing circle at Sheepscot General is a happy, uplifting event, one that I highly recommend. Townsend does a wonderful job of leading the circle, including offering gentle advice to guitarists about watching each other strumming so everyone can stay together.

I walked out into the night with the catchy song “Wagon Wheel” – co-written by Bob Dylan and Ketch Secor, and made popular by Darius Rucker and Old Crow Medicine Show (of which Secor is a member) – still running through my head.

Rock me mama any way you feel

Rock me mama like the wind and the rain

And when I got home, almost unbelievably, but decidedly serendipitously, my husband and my daughter happened to be listening to … Darius Rucker singing “Wagon Wheel.” It was a good night.

The next community singing circle takes place Saturday, March 28. The event runs until 8 p.m. or sometimes a little later.