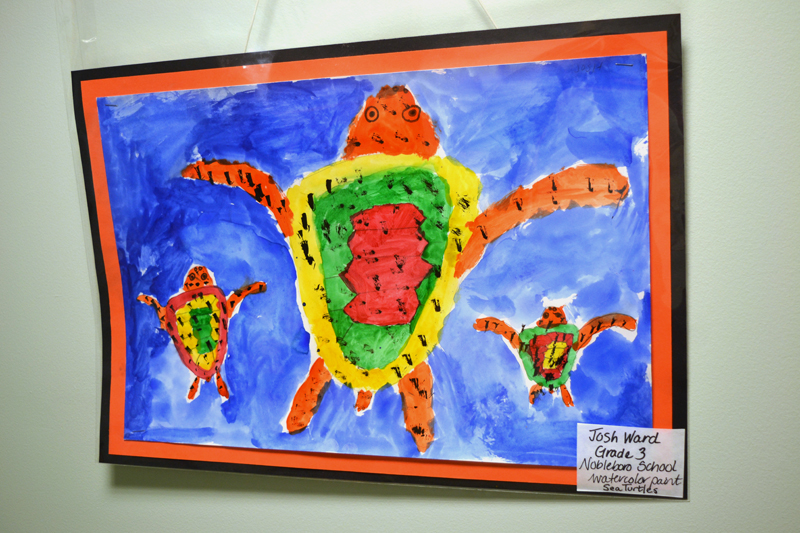 Nobleboro Central School third-grader Josh Ward’s watercolor painting of sea turtles is one of the many colorful pieces of artwork by local schoolkids on display through Friday, May 19 at The Lincoln Home, 22 River Road, Newcastle. Go see the show before it’s gone! (Christine LaPado-Breglia photo)

She’s back: It’s that time again – time for guest columnist Caitlin Cass, the school reporter at Great Salt Bay Community School in Damariscotta, to offer readers her interesting, well-informed take on the lively arts scene at her school:

GSB band program has a lot to offer

There’s an upcoming spring band concert at GSB, to be held on Friday, May 5 at 6:30 p.m. in the gymnasium. “This concert will be different because it has the beginner band – that’s very exciting. A few months ago they were trying to figure out how to hold their instruments and everything; now they’re playing in front of lots of people,” Morneau said. “It’s a big night for them; it’s also a big night for the eighth-graders. It’s their final concert here.”

This band program has made such a positive impact on students’ lives. I’m part of the GSB advanced band, a group of seventh- and eighth-graders who love music. I can speak from experience when I say that our band has grown over the year into a group of friends. The work we have to do in and out of school isn’t always easy, but it’s more fun than most homework.

Former band students who have worked with Morneau have gone on to do amazing things. “It’s so great to see when former students get their Ph.D., or they’re playing in (a certain) band – it’s great,” said Morneau. “A recent story is that last week a former student said that he painted a piano for Steinway, based on Mussorgsky’s ‘Pictures at an Exhibition.’ It was on display in New York at the Steinway building, and he played it there.”

The music program at GSB is such a big part of students’ lives, and the entire school. Morneau, who also conducts the Bowdoin College band, said, “There really isn’t a huge difference between (college and middle school bands), since you have people here trying to make beautiful music, and at the college they’re working hard to make beautiful music.”

Those who come to support the eighth-graders at their last concert will probably find that they will be looking forward to the next concert.

Saving stories about Mom and Grandma: In time for Mother’s Day, author, oral historian, and professional story-saver Meghan Vigeant will give a talk and share audio recordings at 6 p.m. at Sheepscot General, at 98 Town House Road in Whitefield, on Friday, May 12. Vigeant’s presentation, based on her work with elders over the years, is designed to inspire attendees to save the stories of their own elders.

“Creativity is an area in which younger people have a tremendous advantage, since they have an endearing habit of always questioning past wisdom and authority.” – William Redington Hewlett