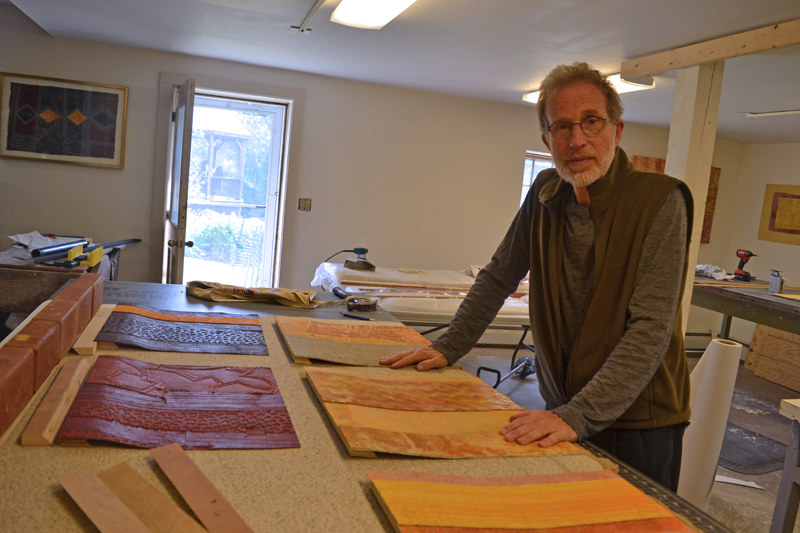 Mason on display: I had the pleasure of spending time recently with highly accomplished Nobleboro artist George Mason, who happens to be one of the founders of the fantastic Watershed Center for Ceramic Arts in Newcastle. Mason, who has a background in ceramic architectural tile, was readying dozens of his “relief tapestries,” as he calls his lovely, partially encaustic work, for his open house and studio sale coming up on July 15 and 22 in the huge, light-filled room of the beautifully renovated former church that he calls home.

Mason’s beautiful work is inspired by his many years teaching art in India and the Middle East, where there is “a tradition of cloth,” as he put it, specifically ceremonial cloth marking an exchange between two people. Mason’s reverence for the time-honored tradition of cloth is evident in his work, which conjures up images and symbols that could as easily be from hundreds and hundreds of years ago as from today.

Mason speaks quietly as he describes his love for the content of his work: “I just feel that color and texture – which you cannot really separate – are synonymous in my book. Color and texture, they nourish; they don’t have a narrative. We all bring our own narrative (to the work), but I’m not wanting to be conclusive. I love the materials. They’re nourishing. So that’s the content.”

Gazing at a Mason piece, especially in the literally church-like environs of the bottom floor of his home, is a peaceful, rewarding experience. Light plays off of colors in both his smaller pieces and in his larger, multilayered hanging pieces. Some of those larger pieces grace the living area on an upper floor of Mason’s home, which he kindly gave me a tour of.

Do check out Mason’s work – and chat with him as well. Mason’s open house and studio sale will take place from 10 a.m. to 4 p.m. on both Saturday, July 15 and Saturday, July 22 at 123 Borland Hill Road, Damariscotta Mills (Nobleboro). His is the beautiful yellow church-turned-house with the lovely garden and a sign out front announcing his wife’s acupuncture business. 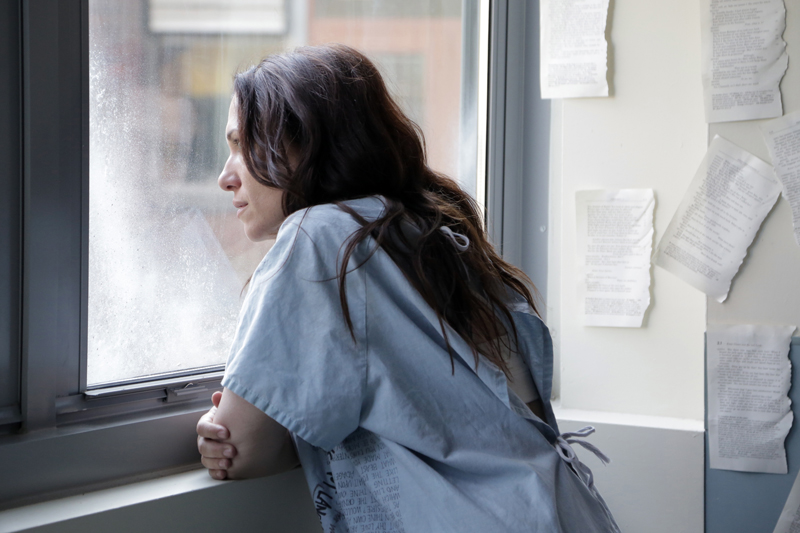 Catherine Eaton stars as Liv in “The Sounding,” which she also directs. (Photo courtesy Asya Danilova)

‘The Sounding’: Catherine Eaton spoke with me recently by phone from her home in New York. Eaton, for those who do not recognize the name, is the director and star of “The Sounding,” the new movie filmed partially on Monhegan Island that will open the upcoming Maine International Film Festival at 7 p.m. on Friday, July 14 at the Waterville Opera House, 93 Main St., Waterville.

Eaton, who also co-wrote “The Sounding,” plays Liv, a woman who “after years of silence, begins to weave a language out of Shakespeare’s words,” as the online press packet describes it (at thesoundingfilm.com). She ends up being committed to a psychiatric hospital by someone supposedly intending to help her. In the hospital, Liv becomes a very vocal rebel, thus endangering her possibility for freedom as she fights to express herself.

“What is normal? How valuable is empathy? How much room can we make for difference in the world? How much uniqueness can we tolerate in ourselves?” These are some of the questions Eaton said she raises in the film. It is, she said, a film “championing otherness.”

July 14 marks the New England premiere of “The Sounding.” The film has already been shown at a number of venues across the United States, including at Cinequest in California. “Across the country, the response has been so strong to the environment in the film,” said Eaton. “I have been blown away by the response.”

Go to miff.org to find out more about the Maine International Film Festival.